What is the purpose of this room on board the Engineer's ship?

Where is this room and what is it used for?

Technically it is not confirmed where this room is, whether it is on the ship or on the planet but in either case, I could not determine what the purpose of the room could have been?

The black mutagen is scattered around the room in containers that are OPEN. I am having a hard time understanding what purpose they could have sitting around the room. The spaces between the cannisters seems very small so I can't even seen the Engineers moving around this room very easily.

What would they use this room for? Speculation allowed but movie facts are desirable if possible. 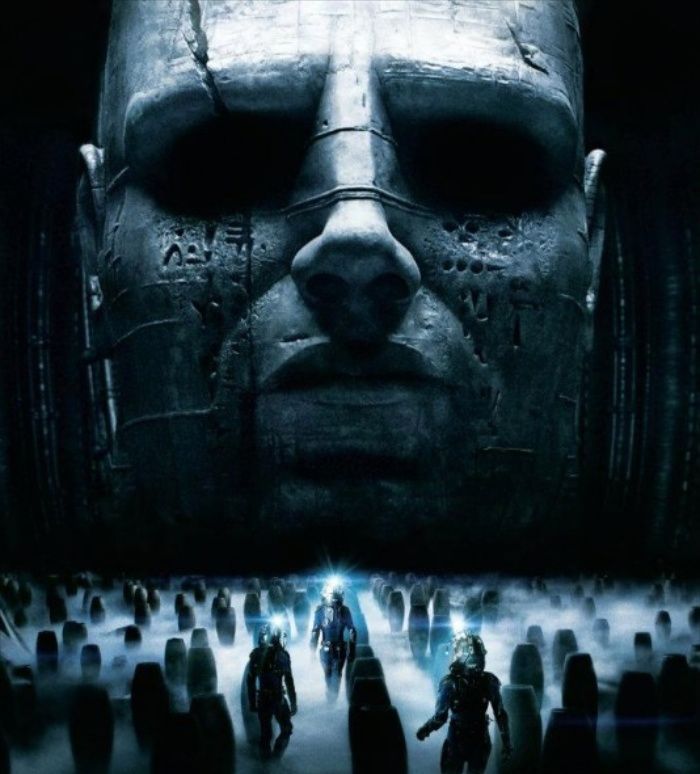 I believe that there is a good chance the idol was merely meant to distract from the fact that the room is a death trap.

The room maybe similar to the ending room/construct of Revelation Space, where the aliens have lured the humans to a particular place with an origin mystery simply to assist the aliens in eradicating humanity.

Once the atmosphere hits the room the bio-agents are set in motion, the only thing that needs to happen is for the explorers to stick around long enough to get infected. But it does seem like an awful lot of canisters just to form a simple trap, though apparently they have quite a stockpile overall.

Perhaps the Engineers that built the bio-weapons facility also had rivals or enemies that they sought to guard against. Rigging a central room with a booby trap, might be useful as a security measure.

On the other-hand in the intro, the aliens appear to have had at one time a reverence for life and creating life. By that same token, maybe they attach a religious significance to causing death. Apparently, Scott considered having the Engineers be Jesus at some point but felt it was a little too blunt for mainstream audiences.

From Alien vs Predator wiki - Engineers:

This explains the cave drawings 'inviting' humanity to track them down. Some fans have suggested that Jesus Christ was an Engineer and his death at the hands of man was the point they turned against humanity. In an interview with Movies.com Ridley Scott acknowledges that this back story was considered but neither confirms nor denies that this was indeed used in the final script:

Movies.com: "We have heard that it was scripted that the Engineers were targeting our planet for destruction because we had crucified one of their representatives, and that Jesus Christ might have been an alien. Was this ever considered?"

Ridley Scott: "We definitely did, and then we thought it was a little too on the nose. But if you look at it as an 'our children misbehaving down there' scenario, there are moments where it looks like we've gone out of control, running around in armor and skirts, which of course would be the Roman Empire. And they were given a long run. A thousand years before their disintegration actually started to happen. And you can say, 'Let's send one more of our emissaries to see if he can stop it'. Guess what? They crucified him."

Either way the idol was probably built to inspire awe, but it's not clear whether the idol is intended for humans or Engineers, or whether it was built with a trap in mind.

A trap and/or to inspire awe, religious or otherwise.

I don't think they were on the ship yet when they found the room.

As Orac would say this question is illogical since all religions possess some elements of self worship. But kidding aside, I would say yes in a sense, though as a god-form or a mortal I cannot say.

Probably decorative art, whether murderous or religious I'm sure the Engineers felt they had to have a sense of style.

Another theory: The idol and room were for racial reunion, but that idea was abandoned in favor of a death trap:
What if the room was originally intended to be for a species reunion for the two species Engineer and man. But after some negative interaction with humanity the idea was abandoned and then the room was booby trapped when some of the Engineers started to have second thoughts about creating other intelligent species.

I believe the room originally had some religious significance to the Engineers but as more and more of the weapons were made they simply needed more storage space. They had the good common sense not to store the weapons on board the ships.

I am not mistaken, the only thing we know about Chamber-Engineers interaction is how they ran there.

From the movie it seemed that they ran from something. They ran so badly that they dared to kill one of their own rather than let the doors open longer. So they thought that the sealed door will provide them with security (the chamber was not inspected completely but I doubt that other bodies were there so it actually saved them).

From this point of view room rather looks like laboratory or some kind of testing facility. This kind of room would provide them with security since it has to be properly isolated.

The purpose of the head is a mystery indeed; it is too big to be a device, which could be manipulated from the ground. What is strange for me is that the head has several stripes. The stripes look uncharacteristic for sculptures or any kind of art (why such imperfection). Also in this case I think it is some kind of a bigger device which can either move (open) or transmit. These stripes can be either power source or they can have mechanical origin. 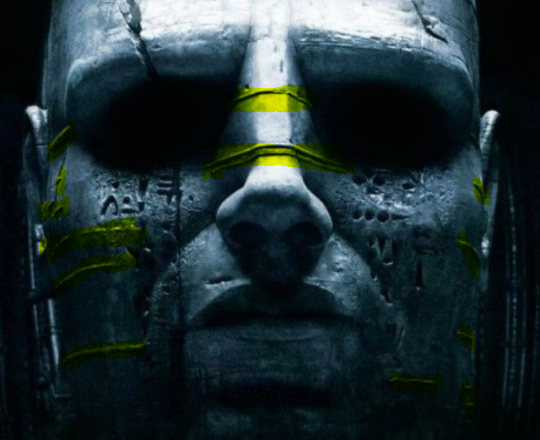 And to fit my theory into the "mutable patterns on the ceiling": ). They could be some kind of shield. Or maybe evaporated black liquid (every liquid evaporates regardless the temperature) condensated on the ceiling.

Just speculating, but it's possible their quest to wipe out Earth had some sort of religious significance to them, in which case this room could function as some sort of shrine (it could also explain the artwork on the ceiling).

Or perhaps it was meant to symbolically show their superiority in a way that any earth-people entering the room of WMDs would know who it was that caused their destruction. I'm not sure / don't remember how they planned on distributing the mutagens, so again, this is just speculation.

Since all of the answers here are speculation, I'll add my own.

Perhaps the Engineers are some type of death-cult. We see this at the start of the film,

when the Engineer, on Earth, ingests the black oil. The oil kills him, but he falls into the water to populate the planet with the remnants of his DNA.

Possibly the room had religious significance in their death cult rituals, which would explain why the canisters are arranged around the head.

I think the big head is in the image of their creator. It appears to be bound. I think it is Fifield asked if they worshipped it. This might indicate that they have slain their creators. Now they're going after their creators' other creation, humans.

Not the answer you're looking for? Browse other questions tagged movie alien-franchise prometheus or ask your own question.

9
How are the engineer's ships made in such a way that they have rubble debris throughout?

11
Why would the engineer's ship play the holographs of space jockey drama?
9
How are the engineer's ships made in such a way that they have rubble debris throughout?
17
Is the ship the crew of the Nostromo find, the same "Engineer" ship that crashed in Prometheus?
12
Where is the possible location of Engineer's sacrifice scene?
4
Why are the engineers completely different between movies?
9
Trying to find a film about a boy who finds a buried spaceship that then takes off with him
2
The Hammerpede scene -- what was the purpose of going into Millburn's throat?