What is the out-of-universe origin of the Rebel crest?

The Rebel crest was first seen in the Star Wars universe in the 1977 film Star Wars (A New Hope), at the very least it was on the rebel helmets.

It has become part of Star Wars lore and has, in-universe, been (to some degree) retcon-ed that the rebel crest either comes from Sabine Wren's phoenix crest (in Disney Canon) or Galen Marek's family crest (in old canon, what is now known as Legends).

Is there any indication of the design inspiration or rationale for the logo in the original film?

What does the Rebel Alliance logo represent? discusses the in-universe origins, and also the re-use of the logo in Star Wars Rebels, but not the original out-of-universe inspiration for the 1977 version of the logo.

In the original A New Hope, the rebel crest is only prominently featured on the helmets of the Alliance pilots. Something like the crest first appears in the design process in sketches made by John Mollo, the Academy-Award-winning costume designer for the early Star Wars films. Prior to working on the first film, Mollo had no specific experience in costume design, but he was an expert on military history and the history of military uniforms in particular. (And traditional French military uniforms, which Mollo had studied, featured the suggestively similar fleur-de-lis emblem.) After seeing the third draft of George Lucas's screenplay (at which point the story was still quite different from the one that eventually was used), Mollo started working on costume sketches.

Conceptual designer Ralph McQuarrie also made major contributions to the costume design, most notably the design of Darth Vader's masked and helmeted outfit.* However, I can find no evidence online of any A New Hope work by McQuarrie that featured anything like the crest on helmets or anywhere else, although he did experiment with helmet decorations in his concept work for snow troopers and Boba Fett for The Empire Strikes Back. I do not find any evidence of the crest in the sketchwork of visual effects art director Joe Johnston, who developed the vehicle and equipment designs for the film. (The entirety of The Star Wars Sketchbook featuring much of his work, is apparently available for download online.)

The first sketch of Mollo's that I can find that shows anything like the rebel crest shows a blobby red trefoil-like pattern on the helmets of two rebels. 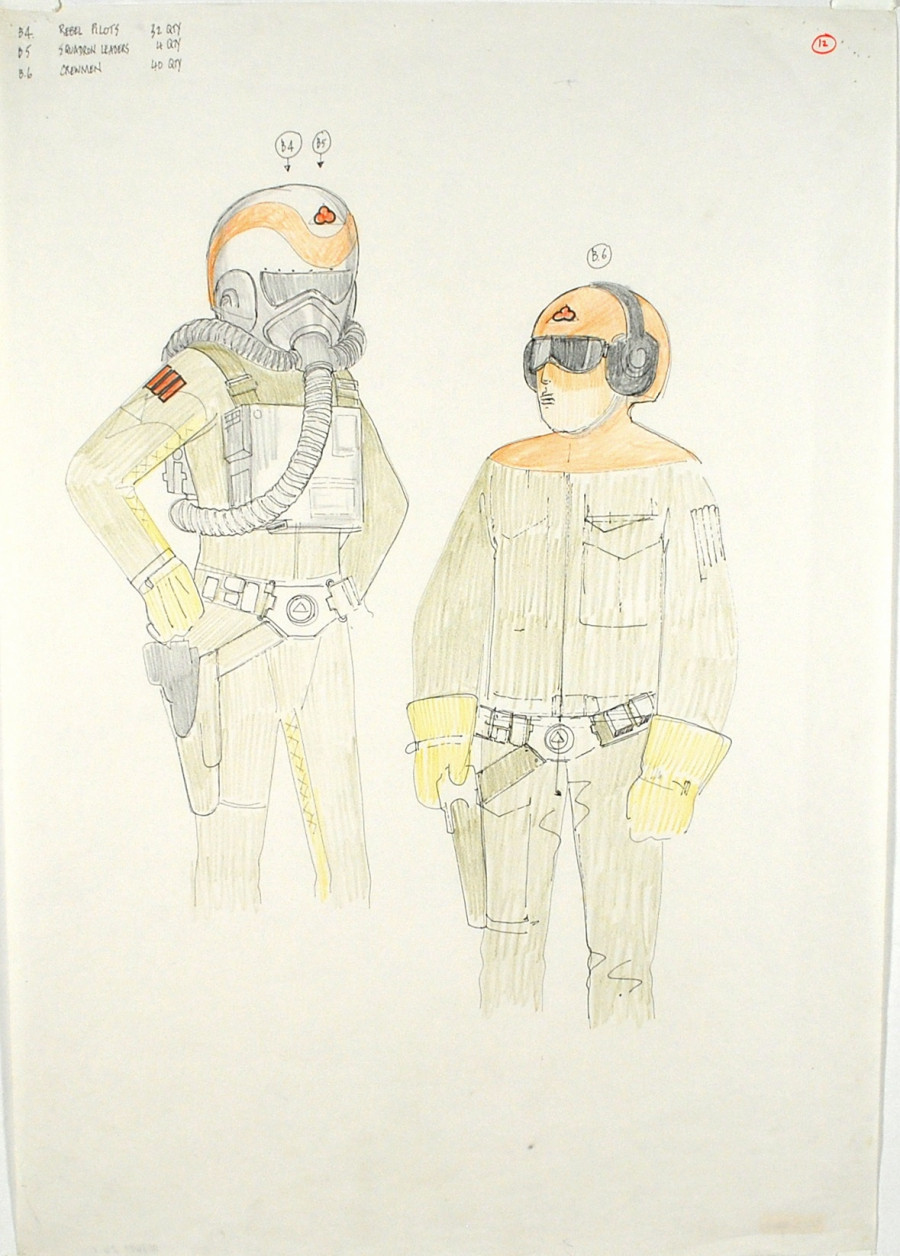 Obviously, these are far from the final versions. The belt and holster designs on these two figures, for example, were ultimately used on Han Solo, rather than the uniformed rebels.

As the costumes developed, Mollo considered other kinds of crests, as shown here, for example. The helmet of the pilot on the left features a helmet with an entirely different design. (The figure on the right shows an interesting combination of the orange suit that was part of the final pilot costume for the movie, along with a helmet, jacket, and scarf that look more appropriate for a World War II flier, but it shows where the ribbed sleeves on Luke's snowspeeder pilot outfit came from.) 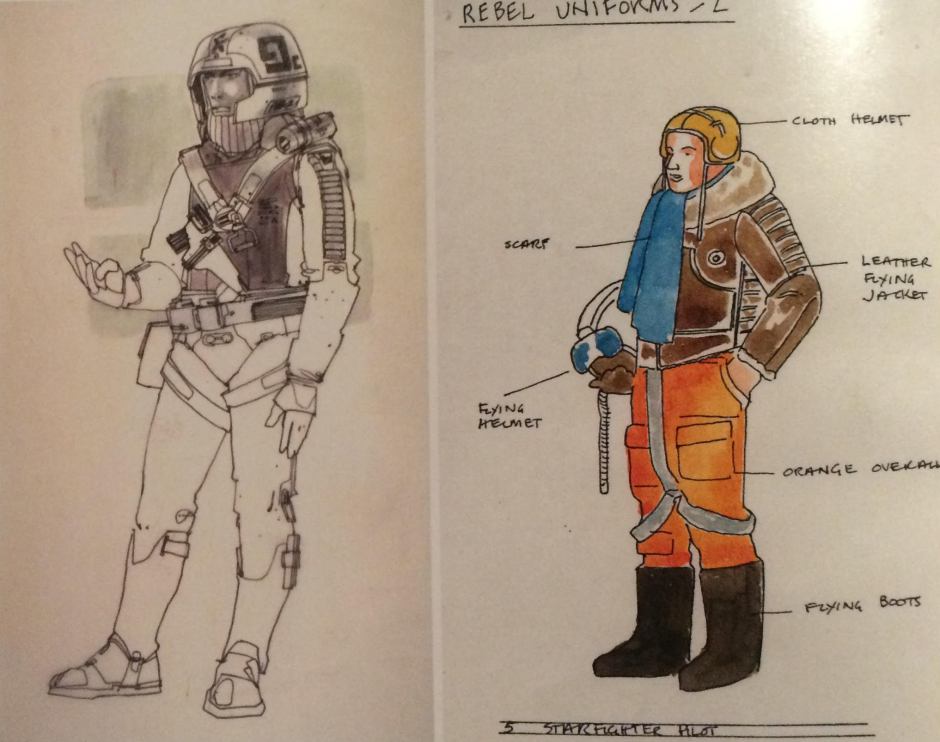 Thinking about Vader's design, Mollo also considered giving the Dark Lord (as well as some other imperials) a crest on his helmet or elsewhere on his costume. In these sketches, he tries out several different locations for the graphical elements, as well as several different appearances for the Sith crest, including ones with distinctly trefoil structures again. Stylistically, the emblem on the bottom right below bears a certain resemblance to the final rebel crest, although it still has a radial symmetry to its three parts, rather than the head-and-wings structure seem in the final product. 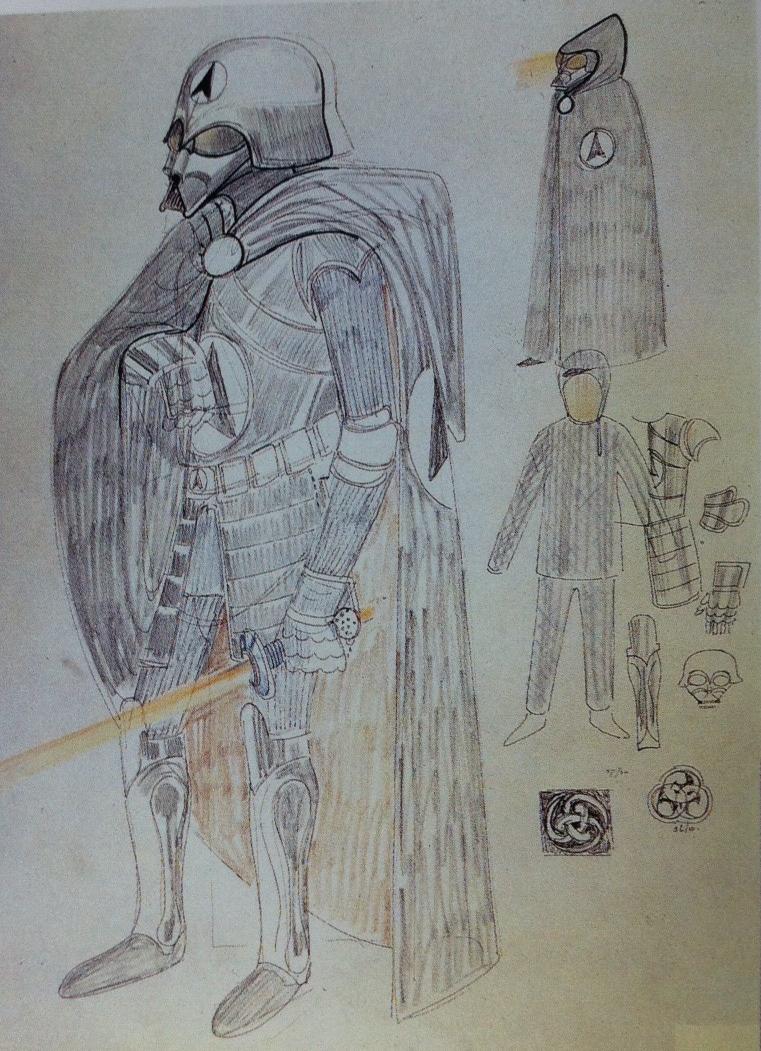 I have not been able to locate a costume sketch by Mollo that shows a version of the final rebel crest. However, based on stylistic evidence and the absence of any similar emblems in the artwork of the other major design artists working on the film, I think it is extremely likely that John Mollo originated the rebel crest design.

*This painting by McQuarrie, for example, may be the most famous piece of Star Wars concept art of all. 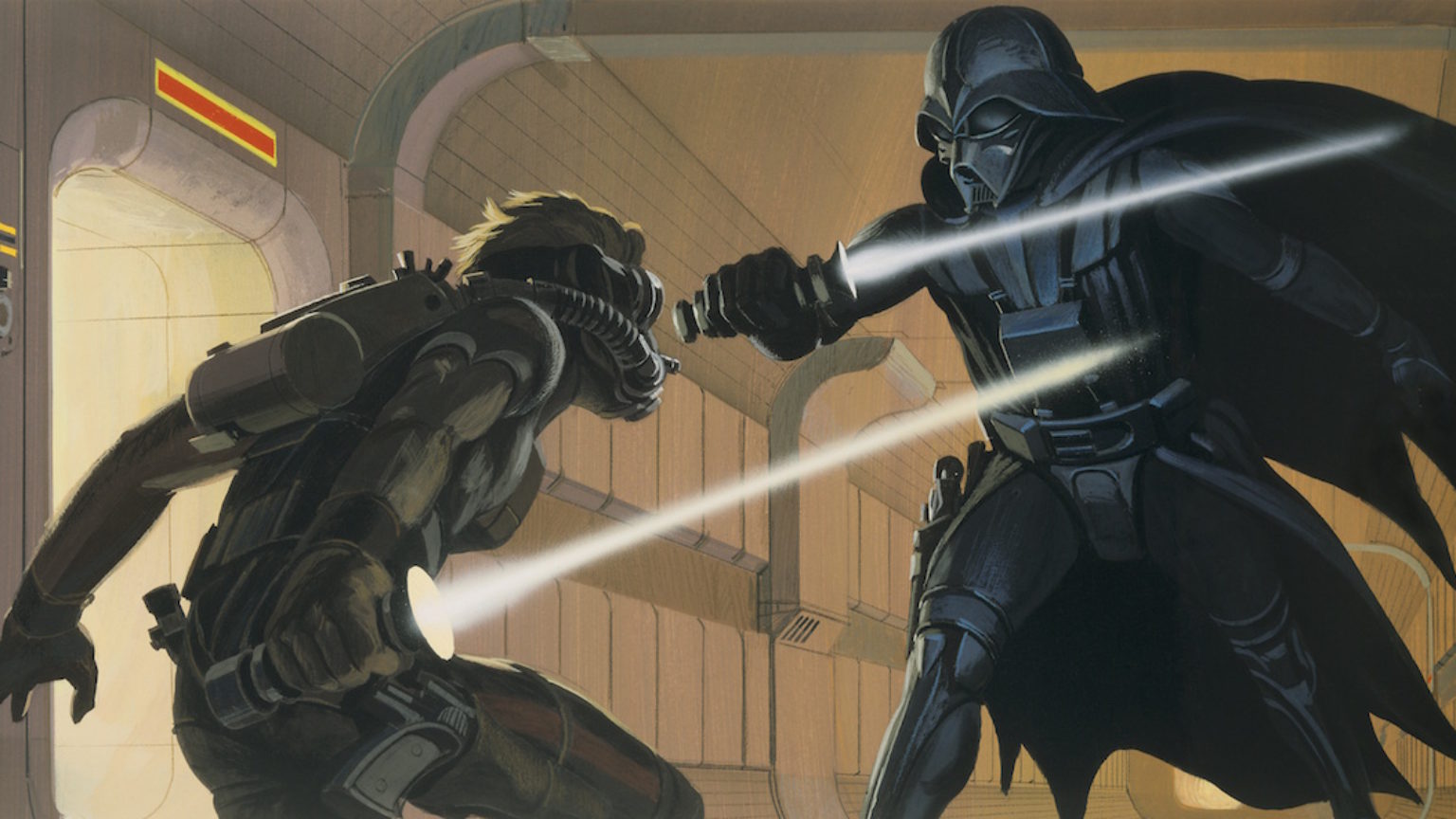 Not the answer you're looking for? Browse other questions tagged star-wars behind-the-scenes costume symbols or ask your own question.

45
What does the Rebel Alliance logo represent?

15
Has the lightsaber cross-guard from the Star Wars 7 teaser trailer been seen before?
54
What was C-3PO talking about when he said, “That’s funny, the damage doesn’t look as bad from out here.”
14
Why did the Resistance use the Rebel symbol while the First Order didn't use the Empire's?
28
Why does Darth Vader opt to physically strangle Captain Antilles at the beginning of “Star Wars” (1977) instead of “Force Choking” him?
74
What did Darth Vader mean by “There’ll be no one to stop us this time.” Who had “stopped” Vader—or the Empire—previously?
6
How did Darth Vader trace the rebel spies to Princess Leia?
8
Was a droid uploading into the Millennium Falcon Navi-Computer inspired by the old Han Solo novels?
1
How was the Razor Crest able to leave the atmosphere?
22
Is there a Canon/Legend explanation of the symbols on two vessels inside the Tantive IV?