Webcomic in which humans have animal powers; main character sets out in the world to find her missing father

I remember reading this webcomic, it was about this girl whose dad went missing so she decides to go out and find him.

Later she finds out the world has changed and people now have been fused with animal DNA and can take their form and use their powers (the animals'), and that she is able to become every predator to the animals she fights.

She joins a team that fights bad guys:

They fight this guy who was king of the snake people but he had too much of the snake DNA so he would eat his own people. He was defeated and the team returned to their HQ, where they have a leaderboard and if you beat someone you take their rank.

The main character being able to take on the form of any predator and even fuse them immediately became a top ten and was challenged by multiple people and became a chimera.

As OP posted in a comment, this is Hinata, a manga posted on Webtoons by the author Vfish.

In order to protect his daughter, Hinata, from the dangers of the world, Shinsuke Akao retreated deep into the forest. He secluded himself, never leaving the forest while he reared and educated Hinata, never allowing her to leave either. On the morning after her sixteenth birthday, Hinata wakes up to find her father missing. With no clues as to where he went, Hinata casts aside the safety of the forest and forges out into the world, only to very different from how her father described it.

Later she finds out the world has changed and people now have been fused with animal DNA and can take their form and use their powers (the animals').

They're called Idenshigata. The use of animal power is called idenshi hatsugen. It takes training to use it properly, but everyone has a "genetic base". There is no such thing as a pure human anymore.

And that she is able to become every predator to the animals she fights.

For instance, after defeating a snake, she was able to have bird-like traits, her very first "morph". Later on she became a mongoose, which is another predator of the snake.

The leader is a blind man that is second to none. He is buff with and where bandages around his eye.

The leader of the Kuromisaki mercenary group, Rinnosuke Takahashi, is indeed blind and wears a blindfold. His name in the north in Mekakushi no Rinnosuke, which means "swift, certain death". He is rumoured to have single-handedly wiped out the Neko-dougentai, a catlike warriors tribe, and he did took down the Snake city's guards by himself.

His second in command is a poison jellyfish; if you touch her skin, you die

Her name is Shinko Tsuginori, and her idenshi hatsugen is permanent. She can't turn it off, so her skin is always covered up in "cnidocytes of the most venomous animal on Earth", the box jellyfish. In order to prevent killing everyone, she runs around fully cloth-covered. 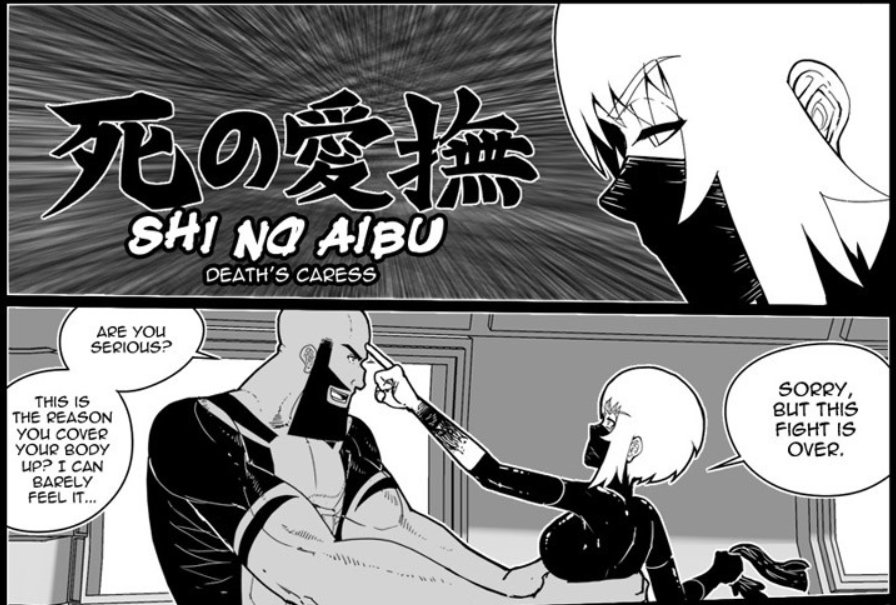 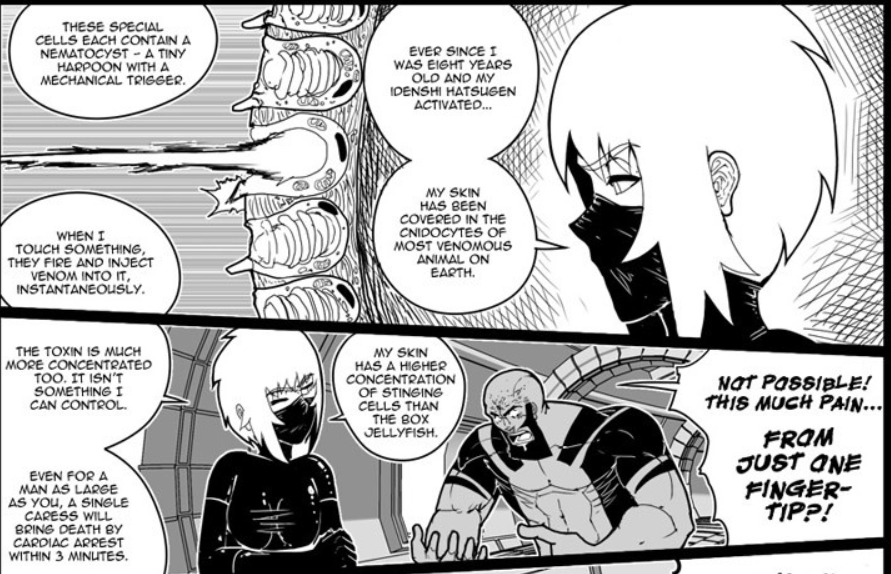 Then there is a guy who can use the power of a beetle and starts a relationship with a snake girl.

Beetle guy would be Kazuma Raikatsuji the sniper, aka Bombarder Beetle. He wields the power of Brachinus crepitans, the common bombarder. He fights Narumi Koyanagi, a Philippine Cobra, during the first issue, and they get closer over time.

They fight this guy who was king of the snake people but he had too much of the snake DNA so he would eat his own people.

The sanke city is called Hebidaitoshi. Its king, Shunshou Sekigawa, has a lot of xenosynchro, "the amount of foreign genes under voluntary control of an indenshigata". Problem being, too much of this makes one take on the traits of their animal base, and the king's animal is the King Cobra, known to have a diet based on other snakes. 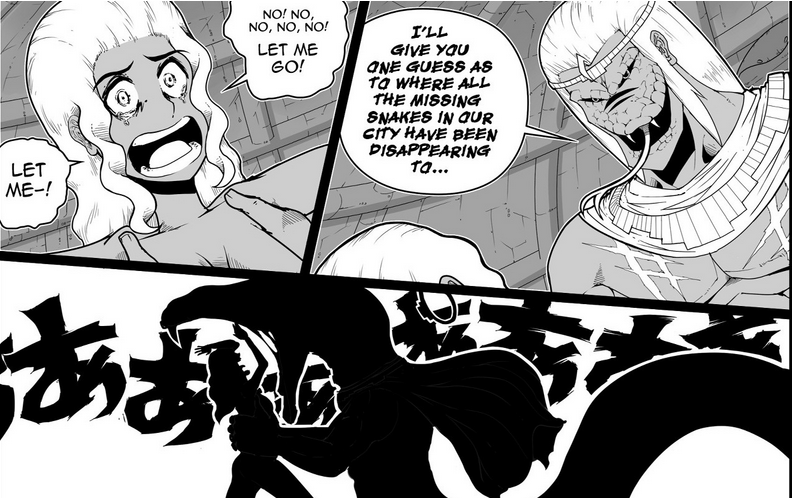 5
Webcomic with a superhero with an open relationship and an evil Walt Disney
5
Webcomic from around 2014-16 about demons and pacts
7
Anime short about two girls shooting each other with guns from their mouths
2
Webcomic with a mermaid and a bird legged android?
3
manhua/manhwa: isekai, FL with redish/pinkish hair adopted by noble family
9
Cartoon (broadcasted in India around 2000s) where people fused with companion animals