Children's book about a cat accepted into Heaven

I had an old answer of mine pop up, and it made me suddenly remember a book I read when I was in elementary school, probably around the 1988-1992 timeframe. The basic plot of it is that, at the start, a cat shows up at the gates of Heaven, and the entirety of the angelic staff are nonplussed as animals are not supposed to be allowed into Heaven. Nevertheless, said cat has a halo, and there's every indication that he's worthy. Being a perfectly normal cat otherwise, they can't exactly ask him any questions, so they start researching the cat's history somehow. Meanwhile, Hell is trying to use this situation to suggest that Heaven's criteria for accepting people are flawed and that the system should be overturned. I remember a scene where three black shadowy cats with seemingly perfect halos are sent up by the Devil to dance in front of Heaven's gates to mock the situation.

Ultimately, the story of the cat gets told. He was residing at a church, I think with a Bishop in residence (I remember a scene where someone kissed the ring). Some workers are there, making repairs to the church and, unbeknownst to the church, one or more of them are actually saboteurs who have set explosives in the church. This cat somehow realized the import of what they were doing, and clawed the blasting cap out of the wall and was biting down on it when they hit the button to set it off, killing the cat and making it a martyr.

I read this at a Catholic elementary school in Kentucky, so I doubt there was anything highly noncanonical in it, although I know my mother and I had a discussion about the difference between fictional and non-fictional books when I tried to use it as an argument for pets being able to go to Heaven. I'm pretty sure it was a hardback book, not terribly long, probably under a hundred pages, and had a pen-and-ink drawing (maybe colored) of the cat with a halo over his head, at the gates to Heaven.

It's Magnifi-Cat by Carolyn and Edmund Sheehan. 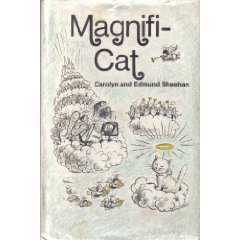 Here's a snippet from a review on Amazon which confirms my memory:

"It is about a cat who was hurled against a Bishop's door in dreadful weather, and was given the shelter "due any waif in a storm". The two develop a great bond that lasts beyond death. St Peter is perplexed; Satan is too, and Heaven's computers seize up, until a way can be found to start them again without breaking any of the rules, specifically the Prime Directive. The problem is that the Recording Angel has no data for a non-human, so the Cat with a halo of a Maximal Saint can't be processed until a way is found of accessing his life story."

29
Short story where God has died, and the Devil offers to keep Heaven "in business"?
7
Short story about a pig that becomes a saint
2
Science Fiction book about opening a portal to Heaven and getting thrown back out

7
Is there a case of a Force user using the Force to curve a lightsaber blade in Legends?
9
80's children's fantasy book with a cat on the cover
7
Children's book series about tiny people
10
Book about a spacefaring race of winged creatures with talons, read about 15 years ago
11
Book series about shape shifters with an old lady and an orphan boy