What is the house hourglass of Hufflepuff filled with?

Giant hourglasses set in niches along one wall in a corner of the entrance hall record the points for all to see; Gryffindor's is filled with rubies, Ravenclaw's with sapphires, and Slytherin's with emeralds. (Source: HP Lexicon, "Points")

But is there any canon info (books, JKR interviews, and if all else fails, movies) on what Hufflepuff's hourglass is filled with?

JK Rowling just replied to someone on Twitter saying they are diamonds.

@HarmonicalHeroL @jk_rowling @lumos What are the gems in the Hufflepuff hourglass?… Oh! Also thanks for all that you do. :)

@jk_rowling: @HarmonicalHero Diamonds, of course. Because that's what Hufflepuffs are (some a little rougher than others). X

Here’s a screenshot of the tweets: 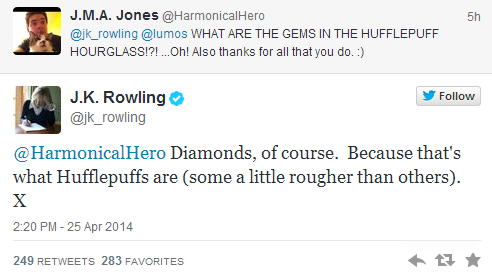 This answer contains ten 100x100 images. If you don't like images with answers this may not be the post for you. I felt the subject matter warranted images to enhance the answer, as it's a visual subject. There is no gratuitous intent and all images are sourced. This is long because I wasn't able to place the images and text side by side.

I did some research into yellow gems. Of course Hufflepuff's colors are both yellow and black, so I did consider black gems and minerals, but concluded that the color would more likely be yellow. Black is so stark and can be gloomy, plus it would be somewhat close in shade to Ravenclaw's sapphires. I considered obsidian as a possibility, but obsidian is more like glass; I don't believe it's a gem. Further, it's very brittle and can break off in sharpened wedges that can easily cut. So, yes, yellow I think! Edited to Add: Hufflepuff's gems are indeed yellow, according to Pottermore -- the link goes to the Great Hall at Pottermore and you'll need a Pottermore account to access it. Just an FYI.

While I'm sure I wasn't able to perform a perfectly exhaustive search, the follow gems/minerals are what I ended up thinking are more likely candidates (and some I end up ruling out). I am including very small images so anyone reading this can see exactly what gemstone I'm referring to. Here's what I came up with:

According to Gemology Online, Citrine today is mostly produced by heating Amethyst to 900° F, at which temperature it turns a green/yellow color. Emeralds, rubies, and blue sapphires occur naturally. As well, the element that Hufflepuff corresponds with is earth, not fire. The citrine picture shows how green undertones come through in the color of the gem.

I love this gem and wish I could definitely say this is likely the Hufflepuffs' gems in the hourglass, but I'm thinking it may not qualify. Chrysoberyl wasn't seen in the West until the 1800s, although it's not clarified whether "the West" includes Europe and the UK, or just North America. It's really the perfect color -- yellow, but with shades that add depth.

While yellow diamonds are more common than clear, and while beautiful, diamonds are expensive (are there any gems more expensive than diamonds per carat?). Perhaps witches and wizards had a source that allowed them to get valuables quite easily; however, what we see in canon doesn't support that. Wizards don't conjure money or food (Gamp's Law of Elemental Transfiguration).

Opal is not a gem; it's a hardened jelly-like substance. It's also quite opaque, which makes it a fairly dull substance. As well, opals have a dark reputation and have been the center of numerous superstitions.

The sapphire is tried and true by Hogwarts, as the Ravenclaws have blue sapphires in their hourglass. The Sapphire is a good possibility because its history dates back to 7th century BC, which fits within Hogwarts' time frame.

Too chunky and opaque to be a proper hourglass gem in its natural form. Cut, it tends to be more brown than yellow. It is also quite ubiquitous, having been credited for just about everything at one point or another.

Gemology Online, again, reports the two-inch faceted "ruby" in the center of the British Imperial Crown was recently identified as a spinel. So we know the spinel is available in the UK. This is another gem with rich colors, that would look good in the Hufflepuffs' hourglass. Blue spinels have been found in England, dating back to the Roman occupation (51 BC to 400 AD). Spinels come in a variety of colors, including yellow; the existence of spinels in the UK so far back in history make the spinel a good candidate.

A bit honey-colored and perhaps too dark for Hufflepuff's colors of primary yellow and black. Also not a particularly unusual gem.

Tourmaline is a very hard and durable gem and it does occur in yellow. Interestingly, when heated, tourmaline attracts dust and particles in the air, which vaguely corresponds to Hufflepuff's earth element. However, tourmaline was not introduced to Europe until the 1700s.

Zircon is not the same as cubic zirconia; it can be a brittle gem. Furthermoe, zircon contains trace amounts of the radioactive minerals hafnium, uranium and thorium. Although I believe these are all mined from the earth (Hufflepuff's element), I think Hogwarts wouldn't use anything that might put its students at risk, however unlikely the possibility, when other options were available. Would the Wizarding world know about radioactivity? Possibly, but under a different context -- more likely, I think, radioactive elements would be known as poisons, if they are known at all. My sense is that J.K. Rowling wasn't considering whether wizards knew about radioactivity when she created her universe, but as uranium is a naturally occurring substance, perhaps master alchemists or potions masters were at least aware of its existence.

I'm going to go with the yellow spinel, especially with the long history of spinels in the UK, the use of a spinel in the crown jewels (showing it's an important gem), and it's rich yellow color. My answer: Yellow Spinel. 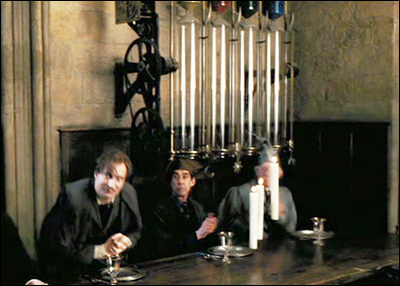 In the movie Prisoner of Azkaban, the hourglasses with the jewels are visible behind the high table. Hufflepuff's jewels are indeed yellow in that shot. 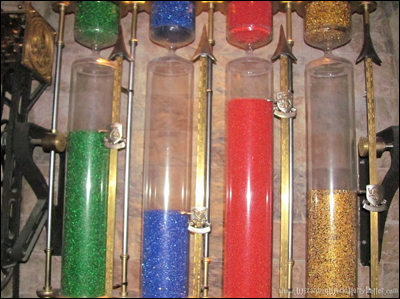 What about amber? Although it's not a rock, sometimes it can be yellow. Also, it can be darker. Think- yellow and black to yellow, dark yellow and dark brown. Although the majority of amber is dark brown, I have a piece of it that is yellow.

10
How are House points tabulated/tracked?