Do Hutts find humanoid females attractive, and if so why?

Jabba the Hutt kept scantily clad humanoid slaves. Jabba even tried to kiss Leia. But IIRC Hutts are hermaphrodites and of course should by all biological reasoning not be attracted to creatures of a specific sex (don't recall sexy dudes hanging around) with radically different body design.

So do Hutts find humanoid females hot, and if so why?

Or do they just do this for status and to show off to the largely humanoid populations that surround them?

Jabba's affection for "dancing girls" is not common to all Hutts. Jabba is a specific Hutt who took pleasure in surrounding himself with bikini-clad dancing girls, but not necessarily the only one.

From The Hutt Gambit:

But Aruk was not one of those sybaritic Hutts who relished the pleasures of the flesh. True, he was a gourmet, and often a gourmand, but he didn't maintain entire palaces filled with slaves to cater to his slightest--or most perverse--whim, the way some Hutts did.

Aruk had heard that Jiliac's nephew, Jabba, kept several female dancing humanoids--humanoids, of all things!--on leashes near him at all times.

Aruk considered such indulgences distasteful and extravagant. The Desilijic clan had always had a weakness for fleshly pleasures.

Jiliac's taste was better than Jabba's, but he enjoyed hedonistic excess just as much as his nephew.

Since Star Wars in general is PG to PG-13, I doubt you will find out any information about any explicit sexual behavior the dancing girls are subjected to. Jabba's bikini-clad harem are almost always referred to as "dancing girls".

In Rebel Dawn, Jabba admires a woman's figure, but there is not anything explicitly sexual in the admiration. His feelings could be closer to how someone might want to dress up a cat or dog:

Jabba watched [Bria Tharen] as she walked away, and found himself thinking that's she'd look magnificent in a dancing girl's costume. All that reddish hair spilling down her bare shoulders. Nicely muscled shoulders. This human was fit, exquisitely so, and her height was impressive. What a dancing girl she'd make!

Other characters in the EU have impressions of what the dancing girls mean to Jabba.

For example, Dengar in The Mandalorian Armor:

Dengar could barely recognize her. He remembered her from Jabba's palace; she had been one of the obese Hutt's troupe of dancing girls. Jabba had liked pretty things, regarding them as exquisite delicacies for his senses, like the wriggling food he'd stuffed down his capacious gullet. And just as with those squirming tidbits, Jabba had savored the death of the young and beautiful.

And Porcellus in Tales from Jabba's Palace:

Porcellus had never learned exactly what Jabba did with his "pets," usually female but always young, lithe, and beautiful but he knew they seldom lasted long and he'd heard some truly horrible tales from his friend and fellow slave Yarna the Askajian.

At the moment, however, all the Hutt did was scoop up a fingerful of the vegetable-crepe stuffing and hold it out to her, and after a moment, with visible distaste, Oola licked the subtly flavored concoction from his slimy hand.

Jabba treats human females as pretty pets, much as humans admire and cuddle domestic cats without considering them sexually desirable. That attitude explains Leia and a previous wearer of the gold bikini, seen with Jabba before the pod race in The Phantom Menace. 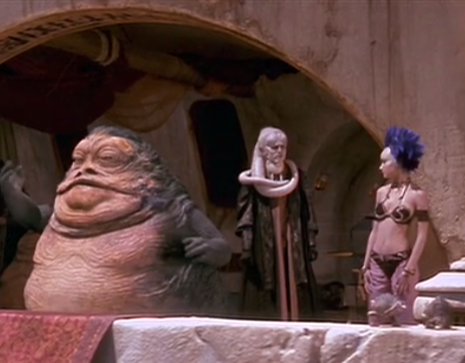 Since Leia wasn't "domesticated", Jabba kept her in chains. Since she was an enemy, Jabba enjoyed provoking her with forced physical proximity, relishing her discomfort and disgust.

Something I didn't see mentioned, not sure how this meshes with expanded universe stuff.

Jabba lives in a galaxy dominated by humans1 and filled with many humanoids2. The majority of the intelligent creatures we see are humanoids. That is, they have hands, arms, heads, etc., like humans.

That would mean that standards of beauty in the galaxy mostly revolve around humans and humanoids. We know the Republic was composed of similar species when he was born, so he grew up surrounded by this demographic.3 It seems reasonable to assume he was at least familiar with this demographic, even if he was mostly surrounded by Hutt culture. Just like people in non-western countries are usually at least partially familiar with western culture these days.4

Supposition: Jabba is at least partially drawn to beautiful humanoids, because he grew up being told they were beautiful. Although he might not find them as sexually desirable as a fellow humanoid would find them, he probably still does feel desire towards them in one manner or another. Perhaps it is sexual in nature.

1: Is the Empire racist?

2: Is the humanoid appearance of most alien species in the Star Trek universe ever canonically addressed?

-4
Why did Jabba the Hutt enslave Leia?
66
Is the humanoid appearance of most alien species in the Star Trek universe ever canonically addressed?
53
Is the Empire racist?
40
What exactly was the nature of the relationship between Jabba the Hutt and Princess Leia?
4
Do other Hutts consider Jabba a sexual deviant?

13
Do different species in Star Wars find each other sexually attractive?
40
What exactly was the nature of the relationship between Jabba the Hutt and Princess Leia?
41
Why does the Empire allow the Hutts remain in power?
16
How would the Hutts have settled the bet between Watto and Qui-Gon?
4
How did Han and Chewie find the Falcon?
20
How do Han and Chewie find Rey and Finn in the Millennium Falcon?
1
Explanation of two typical ranges of humanoid height, ~2m and ~1m?
8
Why was it so hard to find Luke in the trash compactor?
11
Why do Twi'lek males and females have such different ears?