Where did Philip J. Fry get his name?

Fry got his middle initial of J in the same place as Homer J. Simpson. What about his first and last name? Where do Philip and Fry come from? Perhaps it is based on Philips the company, and Fry's Electronics? Or am I thinking too far into this?

You are right about J being a parallel of Homer J. Simpson, but every character who has the middle initial(including fry)is a tribute to Jay Ward co-creator of Bullwinkle J. Moose.

Philip was based off of Phil Hartman who was gonna play Zapp but died before he could so they honored him by basing Fry's first name off of him.(Within the show its Phillips screwdrivers instead.)

But I found nothing about why he got the last name of Fry. Maybe someone can edit this to figure it out.

Although Billy West stated in an interview that the name "Philip" was given to Fry by Matt Groening as a homage to the late Phil Hartman, for whom the role of Zapp Brannigan was created, Groening said during the 2013 Futurama panel at the San Diego Comic-Con that Fry was in fact named after Groening's father, Homer Phillip Groening,[6] who was also the namesake for Homer Simpson.

The middle initial "J" is common in the Groeningverse; compare Homer J. Simpson (and Abe and Bart for that matter). That's Matt Groening's homage to Rocket J. Squirrel and Bullwinkle J. Moose (source: every interview he's ever given); which in turn were named for animator Jay Ward.

As for the name "Fry", out-of-universe, it's hard to find anything on it. Maybe you're right about Fry's Electronics; maybe it connotes his meek nature (being the runt of the litter, the "small fry"); maybe the consonance between the names of time traveler Philip J. Fry and time traveler Michael J. Fox is significant... who knows? Not me, anyway.

In-universe, S3E4 "The Luck of the Fryrish" reveals that Fry's father named him after the Phillips-head screwdriver — and thus indirectly after early-20th-century businessman Henry F. Phillips. 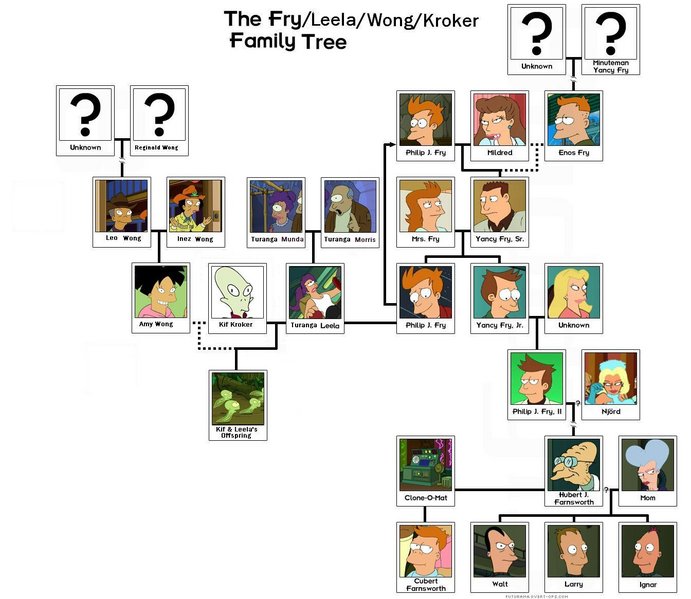 Fry's father, Yancy Fry Sr., named him Philip after the Philips head screwdriver. He cannily sprung this on his wife while she was doped from (Robot) Hell to breakfast on morphine just after giving birth to Fry and - MUCH more importantly - while she was listening to the Mets beat the Dodgers.

As someone else already said, IRL the first name "Philip" was selected to honor Phil Hartman.

He got it when he was born since his mom picked dinner last night she let Fry's father pick the name and he chose Phillip from the Phillip Screwdriver.

Fry's father says to his mother "I was thinkin' that we named him Phillip, you know, after the screwdriver."

Fry's mother agreed because she chose dinner the night before.

10
How did Fry knock out the Single Female Lawyer broadcast?
3
The Late Philip J Fry Time Machine
21
Why doesn't Fry return to his original time?
8
How did Fry survive the alien attacks while in cryosleep?
3
In the episode "The Late Philip J. Fry" why did Farnsworth attempt to kill Adolf Hitler?
10
Does Fry ever actually pay for his cryogenic freezing?
3
Why are Yancy Fry (and his son) able to produce delta waves?