My memory of the title has failed me once more, but this time I have much more information. I read the entirety of this book about one or two years ago, and the memory of its plot is still fresh in my mind.

The cover of the book shows an upside down image of a girl from the neck up. She has her eyes closed and is surrounded by moths. I think the word "jar" is in the title.

I don't know the main character's name, but I do know she is a girl in her teen years. She consumes the life of anyone or thing she touches, and it gives her a rush of energy as well as one trait of that thing. There was an incident when she was younger in which she consumed the life of a young boy she found abusing animals out in the forest surrounding her house. After that, she had this insatiable hunger for the experience once more, and can barely restrain herself from stealing the life essence of other people or things, because once someone with her power takes the life of a human, it leaves them addicted.

Her mother takes notice of her powers and decides to send her away to a camp (which is more like a cult, and I believe actually is a cult). This camp has people with the exact same power as the girl, but their powers don't affect each other so they may touch each other. The leader of this camp is a young woman with long, silky hair. Everyone in the camp is distinctly described as looking young. They have one warning: never consume the life essence of a moth.

The next part is a major spoiler to the entire book, but it provides information that helps identify the story.

The camp takes life energy from jars to sustain themselves, but it's not really revealed what animal one type of jar comes from. This is later shown when the girl falls into a dark cavern, and she is offered help out of it by a young man she met and grew to like in the camp. When he finds out that she knows she's landed in a pile of human bones, he leaves her there. She manages to climb out, and I forget what happens after she does, but I know the book ends when the leader of the camp consumes the life energy of a moth and runs into the fire, killing herself in her momentary attraction to light.

I've looked everywhere for this book, but I simply could not find it. I also can't remember the name of the author.

"The Killing Jar" by Jennifer Bosworth. I did a search on isfdb.org for novels in English with "jar" in the title, and the cover matches your description perfectly.

Seventeen-year-old Kenna Marsden has a secret.

She’s haunted by a violent tragedy she can’t explain. Kenna’s past has kept people—even her own mother—at a distance for years. Just when she finds a friend who loves her and life begins to improve, she’s plunged into a new nightmare. Her mom and twin sister are attacked, and the dark powers Kenna has struggled to suppress awaken with a vengeance.

On the heels of the assault, Kenna is exiled to a nearby commune, known as Eclipse, to live with a relative she never knew she had. There, she discovers an extraordinary new way of life as she learns who she really is, and the wonders she’s capable of. For the first time, she starts to feel like she belongs somewhere. That her terrible secret makes her beautiful and strong, not dangerous. But the longer she stays at Eclipse, the more she senses there is something malignant lurking underneath it all. And she begins to suspect that her new family has sinister plans for her… 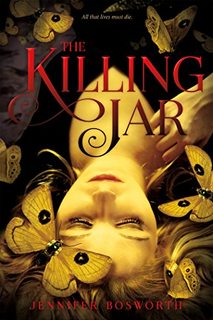