Comic/manga about a girl whose parents die, she goes to live with her aunt and uncle who are actually vampires or witches

I read a book (it was definitely a comic, possibly manga) about a girl whose parents die and she goes to live with her auntie and uncle. They are actually vampires (or witches). Her cousin is mean to her and the girl wants to leave but is convinced by her uncle to stay.

This sounds a little like one of the Courtney Crumrin stories by Ted Naifeh, maybe COURTNEY CRUMRIN AND THE NIGHT THINGS (the first mini-series in that series, published 2003)

Here's the cover of the first issue: 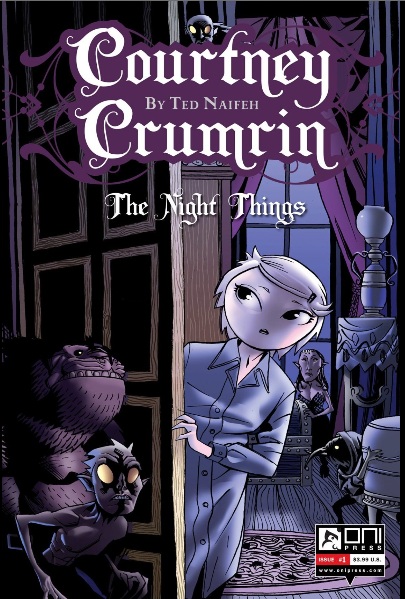 There are differences from what you describe, but those may be explicable:

Not the answer you're looking for? Browse other questions tagged story-identification comics manga or ask your own question.

1
In what novel does a girl-turned-vampire discover she also inherited supernatural powers from her father?
6
2000s young adult novel about a girl in a medieval-type time, whose uncle wants to use to access another dimension and summon elementals
6
Children's book series about tiny people
9
Book where a girl is left with grandmother and discovers she's a clone
8
Gambling Hells in an asteroid belt
32
Manga about a female worker who got dragged into another world together with this high school girl and she was just told she's not needed anymore
6
1970s or 80s kids book: girl's life taken over by a robot doppelganger version of herself