Has Captain America ever been an ape/monkey?

I'm asking this because I am looking for some strange comic book stories, but also because in the Captain America films, the captain himself draws/has a drawing of a dancing monkey. Yes, I know that it is simultaneously a reference to Captain America's cartoonist roots while also being an allegory for the US government's treatment of Captain America. However, I would just like to know if the captain of America has ever been a simian. The closest thing I can think of is the Marvel Apes universe. I'm guessing that there could be at least one more instance (the '60s were a weird time for comics).

If you count the Marvel Apes universe as an example, then yes, Captain America has been depicted as a simian: 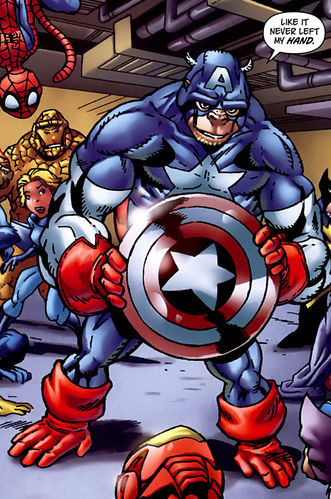