Did Max Rebo die on the sand barge?

The alien Max Rebo and his band played for Jabba in his palace, and at least Rebo was preforming on the Sand Barge when Jabba set out for the pit of Carkoon- was Rebo killed when the barge blew up or did he somehow escape when things hit the fan?

According to Star Wars Insider #67, the band managed to leap to safety before the barge exploded. The same article notes that Rebo became wealthy and ultimately retired to Coruscant. 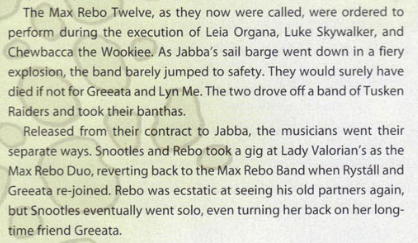 This incident can be seen in the Legends short story; And the Band Played On: The Band's Tale

Droopy jumped without a second’s hesitation.

“Come on, Max,” Sy said. “It’s not that far, and you can slide down the steering vane most of the way.

Max pushed open the shutter and looked down. It seemed like an awfully long way. He hesitated. Droopy helped Sy up. They both looked unhurt.

Something exploded behind Max, and the force of the blast was like a shove in Max’s back. He flew out the viewport, over Sy and Droopy, and hit the sand flat on his back.

The fall stunned him. His’ hands and face stung, and a ringing sound filled his ears. He was distantly aware of someone picking him up and carrying him away from the sail barge, which seemed to be.burning.

He raised his head just in time to see the barge explode in a huge orange fireball.

12
Were speeder bikes originally part of the attack on Jabba's sail barge?
21
How did R2D2 smuggle the lightsaber into Jabba's palace?
60
How did Jabba become such a powerful crime lord?
25
Why and how were Luke Skywalker's hands freed before he went into the Pit of Carkoon at the Dune Sea in ROTJ?
14
Why the fake desert landscape in Return of the Jedi?
24
Did Yoda know (of) Snoke?
8
Was that frog thing outside Jabba's Palace that eats an animal and burps in the original Return of the Jedi?
26
Why is C-3PO kept in the dark in Return of the Jedi while R2-D2 is not?