When, Where and Why did the fashion to depict Fantasy Dark Lords Wearing Spiked Crowns Start?

I am asking when, where, and above all why, did the fashion to depict dark lords in fantasy stories wearing spiked crowns start? Why do some artists think that is a good idea?

Well, maybe I should illustrate some, just in case.

Early medieval crowns in western Europe were more or less plain circlets that went around the head horizontally, made of gold and studded with jewels.

The Iron Crown of Lombardy looked like this, for example. It was called the Iron Crown because the metal band on the inner side was believed to be iron, an iron nail from the crucifixion according to legend. The Iron Crown is currently supposed to have been first made sometime in the 4th-5th centuries and remade in the 9th century.

Later things began to be added to the top of the circlets, which eventually became what are called fleurons. Fleurons would have the shape of fleur-di-lis, or of crosses, or of three lobed leaves, or of clubs in a deck of cards, or of other usually three lobed objects.

The number of fleurons varied, but the typical number was four at 90 degree angles around the circlet, so that as seen from the front three would be visible.

Here is the Crown of Saint Wenceslaus made by King Charles of Bohemia (Emperor Charles IV) in 1347.

Here is another medieval crown:

The Polish crown of Boleslaw I the Brave (reigned 992-1025) was actually made centuries later by Wladyslaw the Elbow High (reigned 1320-1333). This is a modern reproduction:

Medeival artists usually depicted kings wearing that type of crown and medieval coats of arms displayed stylized versions of that time of crown whenever crowns were used as charges.

Here is King Arthur from the Nine Worthies tapestry:

Here are the three crowns in the coat of arms of Sweden:

So when people who knew anything about medieval Europe read in The Fellowship of the Ring, Book I, Chapter 11, "A Knife in the Dark", the description of the Witch King - "The third was taller than the others, his hair was long and gleaming and on his helm was a crown." - they would picture him with a crown consisting of a circlet with fleurons worn around or on top of his helmet.

In The Return of the King Book V Chapter "the Siege of Gondor" the Witch King rides through the gates of Minas Tirith. "The Black Rider threw back his hood and behold! he had a kingly crown; yet upon no head visible was it set. The red fires shown between it and the mantled shoulders vast and dark."

And again most readers would assume that his kingly crown looked like a medieval king's crown.

In chapter 6, "The Battle of the Pelennor Fields" the Witch King is described: "A crown of steel he bore, but between rim and robe naught was there to see, save only a deadly gleam of eyes: The Lord of the Nazgul." If the crown was made of steel, like a helmet, instead of being made of gold, it would be confused for a helmet unless it was shaped like a crown instead.

In The Fellowship of the Ring, Book I, Chapter 11, "A Knife in the Dark" Aragon tells a short version of the story of Beren and Luthien: "...Tinuviel rescued Beren from the dungeons of Sauron, and together they passed through great dangers, and cast down even the Great Enemy from his throne, and took from his iron crown one of the tree Silmarils, brightest of all jewels, to be the bride-piece of Luthien to Thingol her father..."

In The Two Towers, Book Four, Chapter VIII, "The Stairs of Cirith Ungol" the Hobbits rest for a while and talk about old stories: "Beren now, he never thought he was going to get that Silmaril from the Iron Crown in Thangorodrim, and yet he did, and that was a worse place and a blacker danger than ours."

Most readers would naturally assume that the Iron Crown looked like a normal medieval European crown, only made out of iron, and presumably having only three jewels, the Silmarils.

And dark lords in general seem to be depicted with spiked helmets, crowns, or head gear.

If you search for images of dark lords you will see many of Morgoth, Sauron, Darth Vader, and Voldemort, and many others described simply as dark lords. And many of those dark lords seem to have spikes coming out of their headgear or possibly their heads. The artists of those images succeed in making their dark lords look dark, but not so much in depicting them look like lords, especially not like lords who want to be emperors of everywhere.

So when did that fashion start?

Crowns and tiaras with sharply pointed crests have been visually associated with queens rather than kings for at least several centuries. While the vertical decorations on kingly diadems were conventionally in the shapes of crosses (for overt Christian imagery) or fleur-de-lis, the corresponding queenly crowns were often depicted as having a simpler design with a jagged upper edge. Perhaps the best known example of how these styles are used in contrast today is in the designs of the standard Staunton chess pieces, developed and first sold in the 1840s. 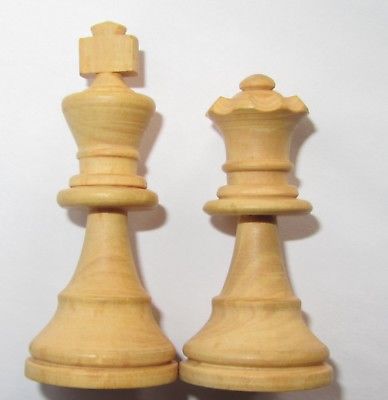 A very influential image involving such a crown was the villainess in Walt Disney's first animated feature-length film, Snow White. 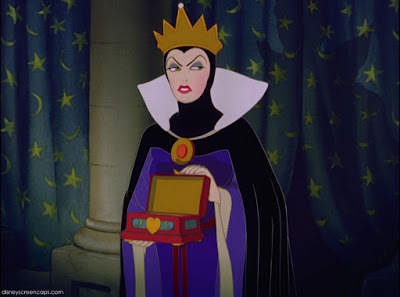 Disney's skillfully executed design for the evil queen has a distinctly pointed crown. The jagged edges give her a menacing appearance while maintaining a definitely feminine styling.

This may not mark the first use of a sharply spiked crown on a Dark Lord/Lady character. (The menacing symbolism of such spikes is pretty straightforward.) However, it was surely influential, as the evil queen in Snow White was one of the first fantasy villains in visual mass media.

Not the answer you're looking for? Browse other questions tagged history-of fantasy-genre or ask your own question.

12
A good account of the development of the modern fantasy genre?
9
When Was the First Same Sex Relationship in SF or Fantasy on TV or in the Movies?
9
When did comic crossovers start?
11
Where did the idea that trolls can regenerate come from?
124
When and why did orcs go green?
7
When was the fantasy trope of psychological invisibility first used?
13
What's the difference between “high fantasy” and “low fantasy”?
5
What is the genre of fantasy stories that take place in a science fiction universe?
51
What is the earliest instance of “Dark Elves” in modern Fantasy?
15
When did an overlap in readership of both Sci-Fi and Fantasy first become recognized by publishers?