In Captain America: The Winter Soldier, during the elevator scene when a team of Hydra soldiers try to take down Steve, he is tased multiple times and he doesn't seem to be anywhere near being affected by it.

So, in the comics too, is Captain America immune to electric shocks in general? (up to a certain limit of course but obviously beyond a normal human's capacity)

More than the average human, yes. Actually immune, definitely not.

Captain America gets zapped a lot. Most of the time, by powerful villains/heroes, which could probably have killed your average Joe. But it's Captain America, so, he gets back up anyways... though each time it hurts badly.

The first one appears in Captain America Comics #78 (1954). Communist agent Ivan Kronov was transformed into the Electro creature, "the most fearsome and horrible dealer of death the red enemies have ever devised for the destruction of Captain America". (nota: he's another Electro than Spidey's foe. We'll get to that later)

His power of electricity is supposed to "combat all the strength of Captain America", and he's indeed sent after Cap (and Bucky). He tries to kill them as fast as possible, since a flaw in his design requires him to recharge his body's electric charge every 24 hours.

Anyway, upon meeting him for the first time, Cap advices Bucky to look out, due to a "short circuit".

Captain America doesn't get zapped "properly" (Bucky does, though), but if he was immune, given the 50s depiction of the character, I'd expect him to charge head in and punch Electro. Since he doesn't, my guess is that he knows very well he would be slowed down by the electric shocks.

Behold The Amazing Spider-Man #178 (1978). Cap rescues a kidnapped child. The kidnapper appears from behind, hidden in the shadows. Captain America grabs him, however it turns out the kidnapper is Electro. Zap! 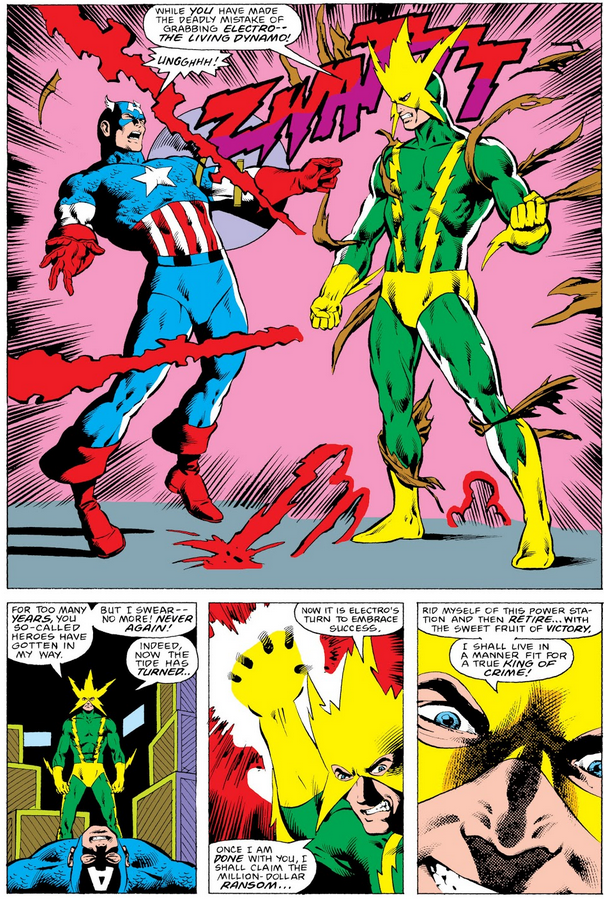 In issue #3 of the 1984 Falcon miniseries, Falcon is defeated by Electro while he was looking for The Legion, a New York street gang which just kidnapped the President. The next (and final) issue features Captain America going out to help his partner. Electro and Captain America meet, and Electro zaps Cap and renders him unconscious for a while (he's only back on his feet some pages later). Definitely not immune. 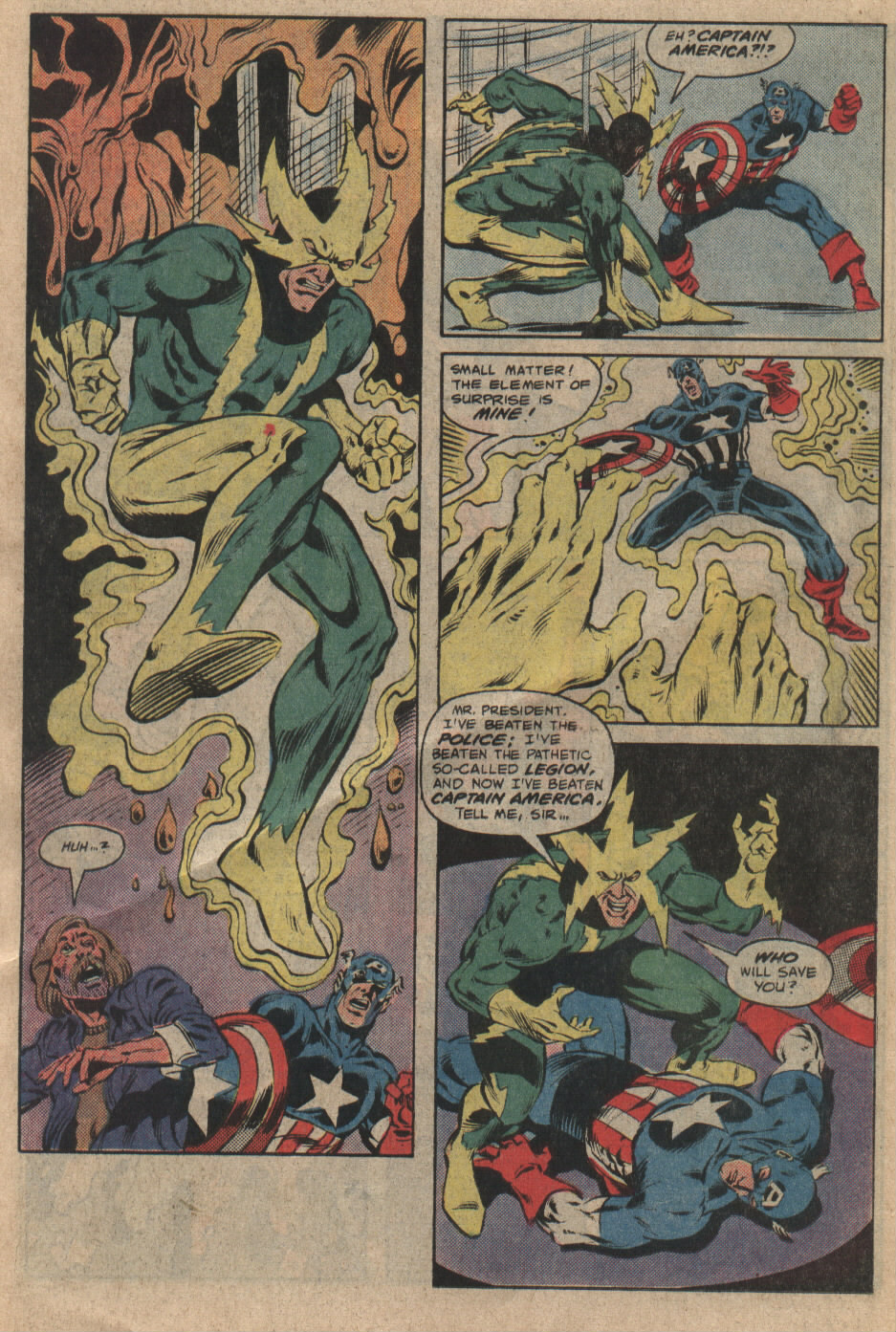 By Electro (Maxwell Dillon) yet again!

Once again, Captain America deliberately avoids having to deal with electrical current, implying he knows it might incapacitate him. 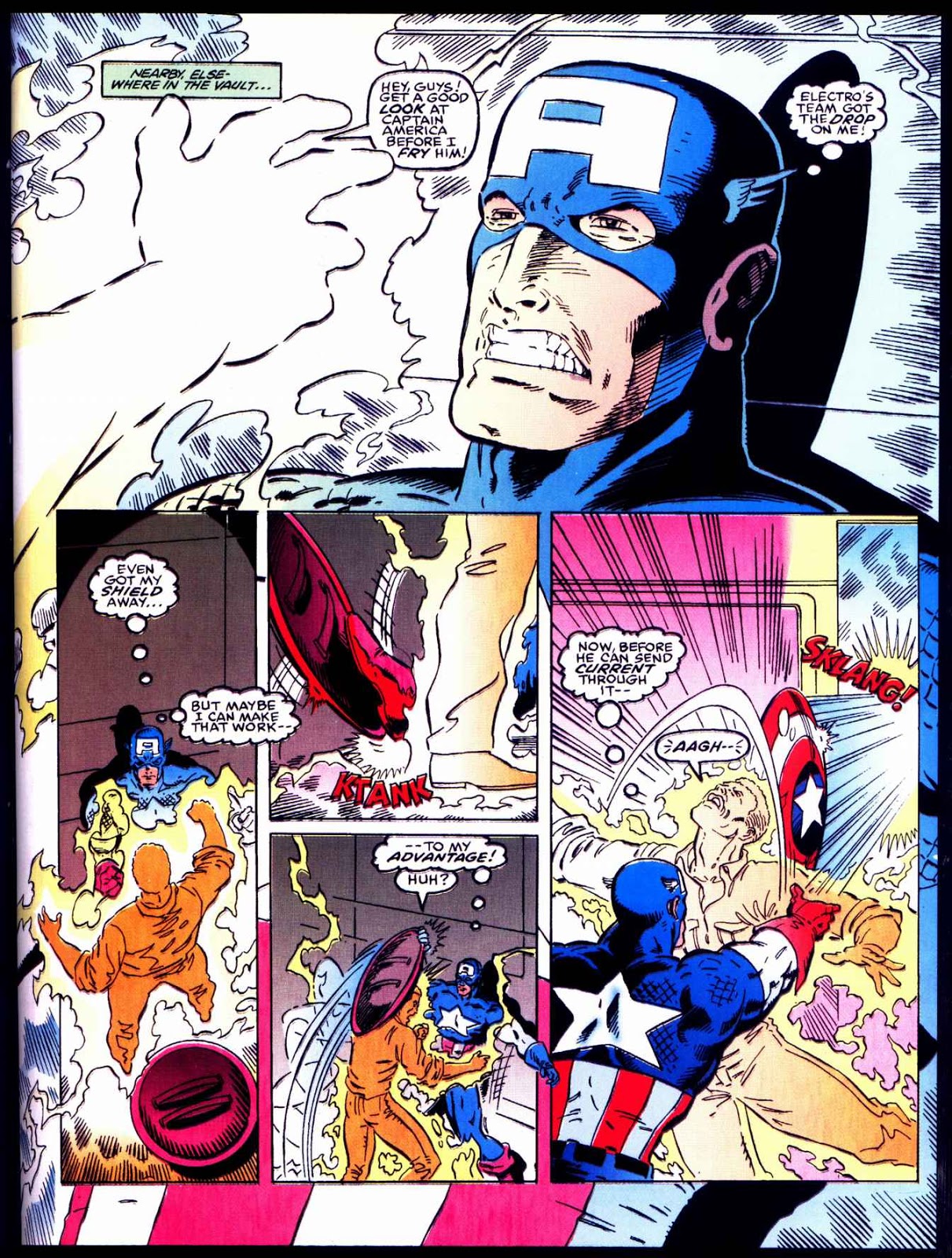 Captain's got a thing with Electros... In Captain America Annual #13 (1994), Ivan Kronov is brought back to life by Red Skull, and his purpose hasn't changed: kill Captain America! And Cap keeps on dodging the electrical waves, which is not something you do if you can handle them just fine. 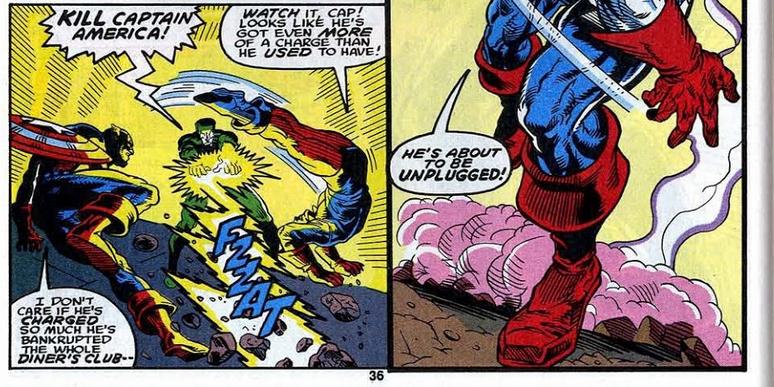 Cap plays the good old "shield throw" move, only for it to be caught by Electro, loaded up with juice, and thrown right back at his chest. Captain America being defeated there is probably not just due to the shield's impact (Electro was three meters away, tops), but to the shield being charged with electricity. 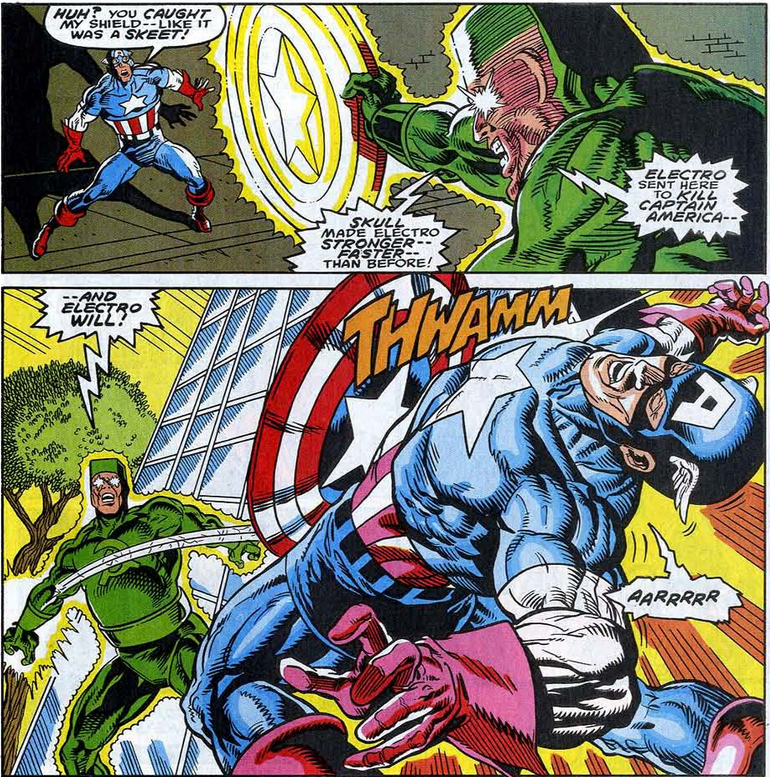 In Marvel team-up #24 (2006), Captain America, along with other heroes, fights against Iron Maniac, the local evil version of Iron Man. Iron Maniac activates his electrical shock device, and the air suddenly smells like roasted Captain America. 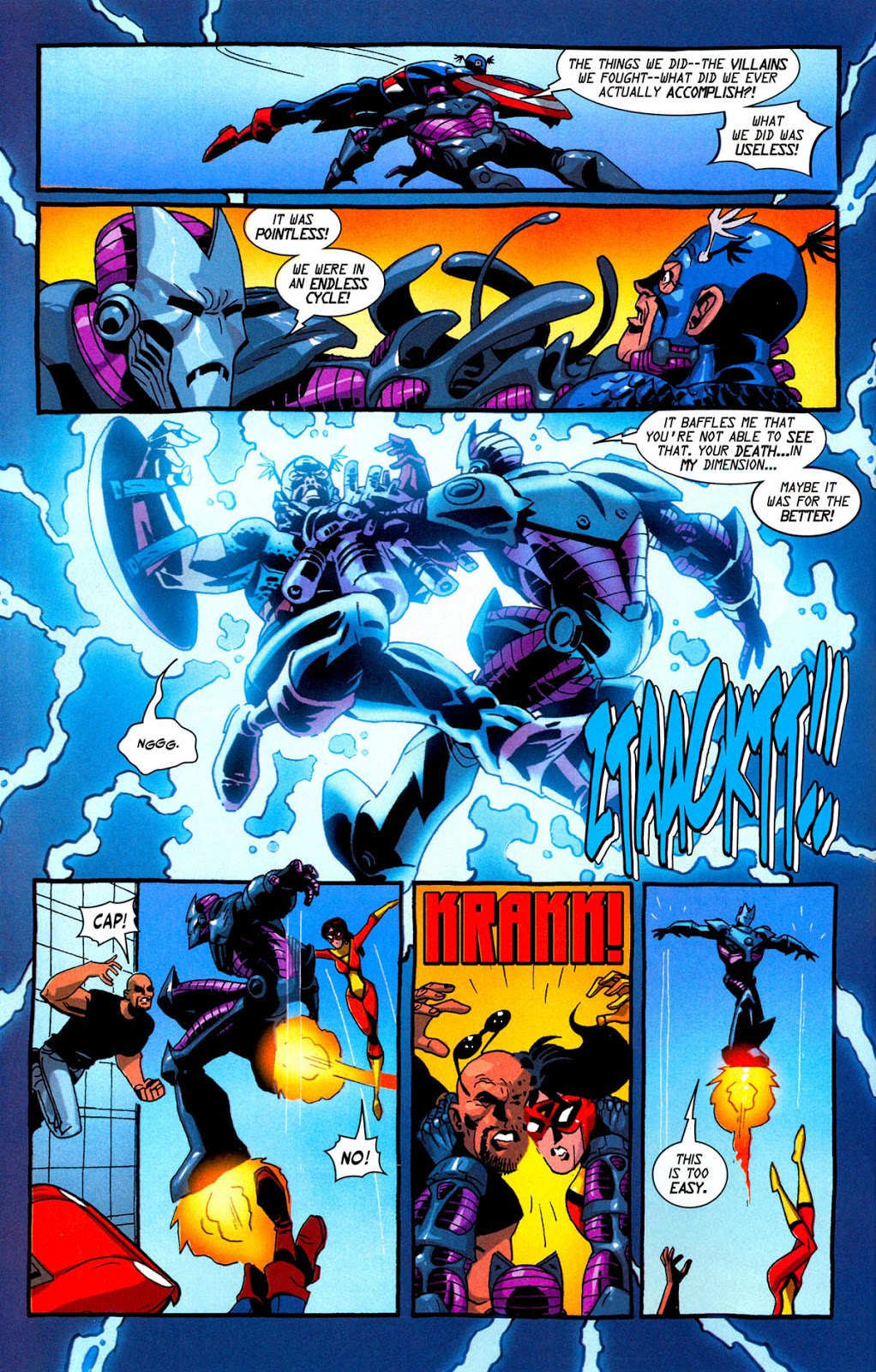 In issue #4 of Ultimate Avengers arc "The next generation" (2010), Captain America flees from Hulk, Red Wasp, S.H.I.E.L.D., and War Machine. To do this, he tries diving into the sewers; but War Machine electrifies the water, neutralizing him. That looks like it stings. 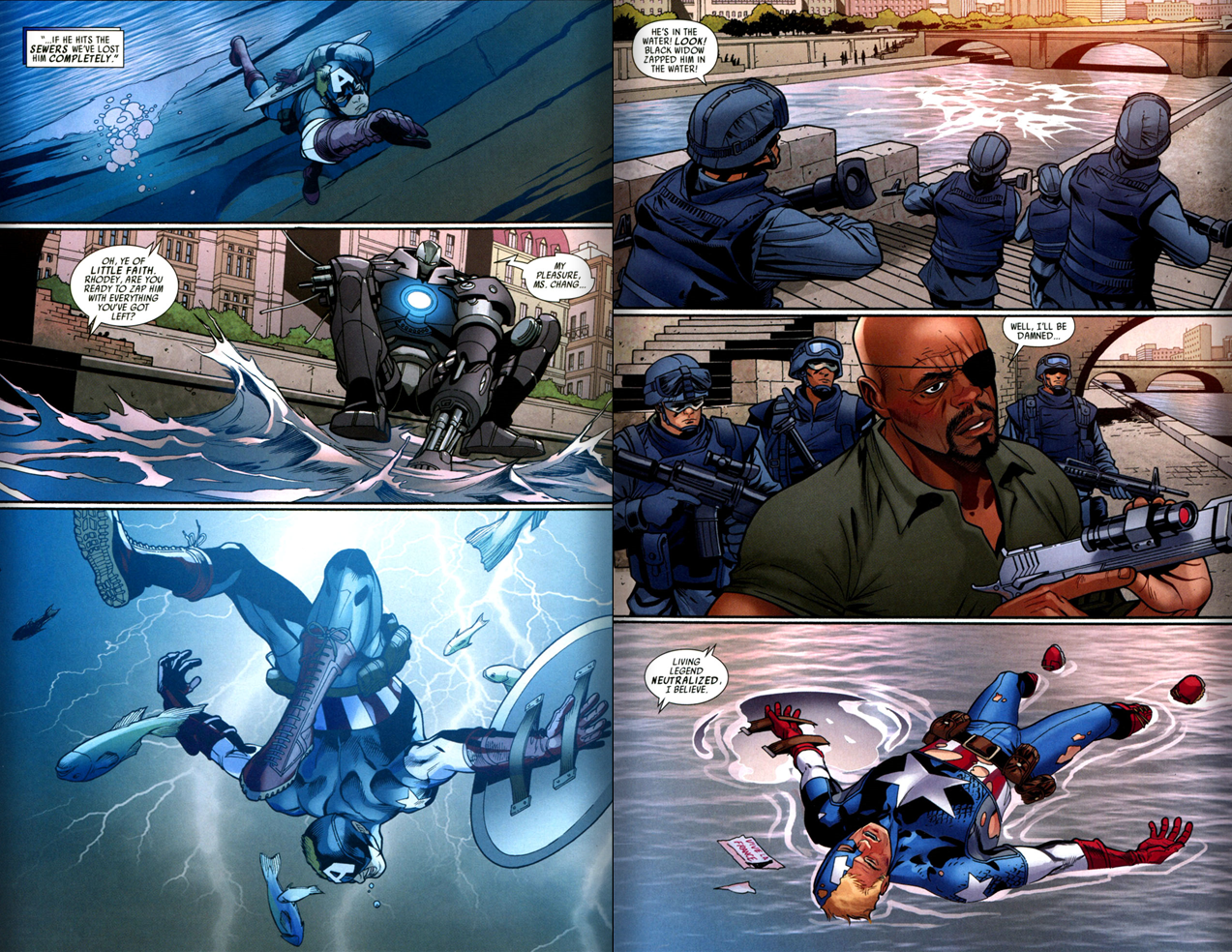 A clarification on Cap vs Iron Man instances

Depending on what writers need, Captain America and Iron Man are either best buds or mortal enemies. These two have fought each from times to times. You'll encounter panels like this one, where Cap gets shot by Iron Man's blasters/beams/stuff. However, these are not always electrical: they've been particles-based, plasma blasts, microwaves, and many other fancy scientific-sounding things.

Given that I'm not sure which ones are definitely only electrical, I did not include any (except for Iron Maniac above). But they exist. And Cap often gets recked in the process.

Upon reading Captain America Comics #2 (1941), I would have thought Captain America could get electrocuted when he used telephone lines as a catapult, but roommates say there's not enough power in those for you to get zapped. If it's wrong, please point it out! Still worth pasting it there. 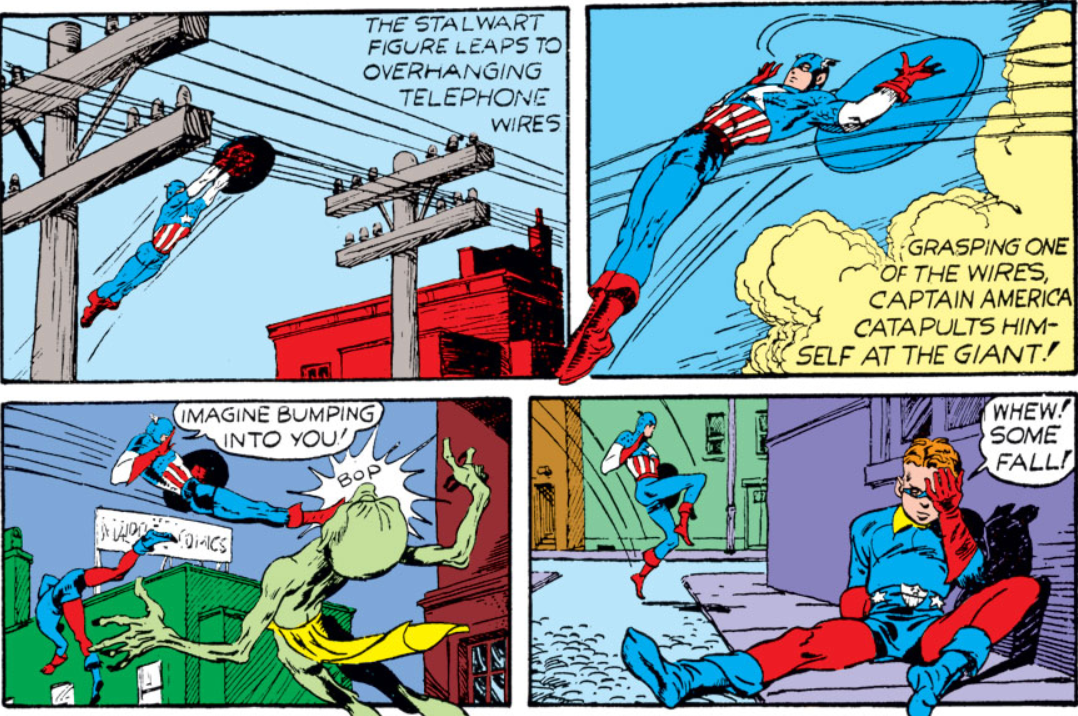 Also worth noticing that Cap's shield is resistant to electricity. It was hit by Thor's lightning and came out just fine. One could think having the shield made so that it can handle electricity shows that Cap isn't immune to electric shocks, but I'd rather say it's for the sake of the shield itself. It is Cap's main weapon, after all; wouldn't want it to be destroyed. 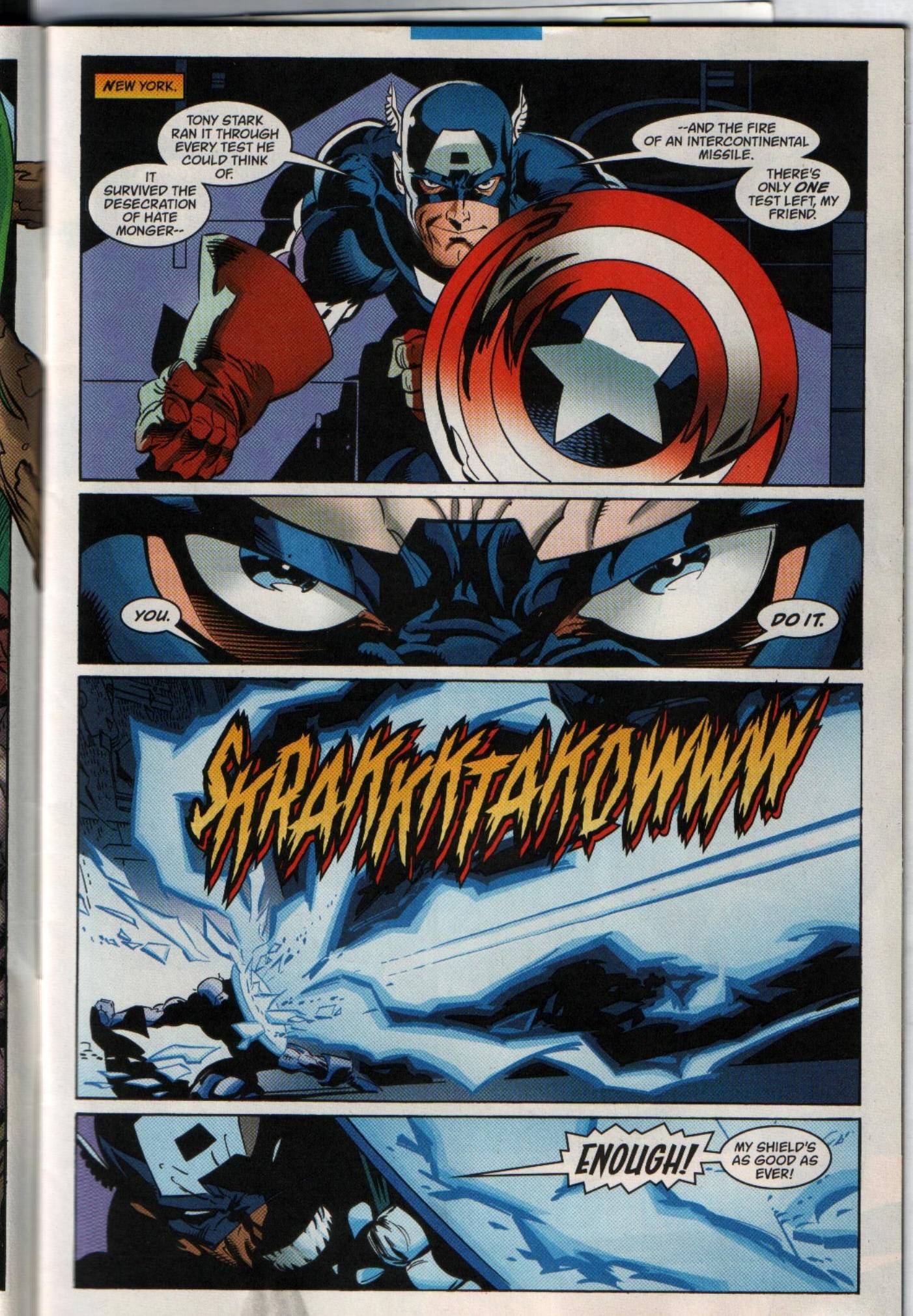 No, Captain America is not immune to electric shocks.

However, he of course has a larger tolerance than an average human. A normal-powered taser isn't enough to bring him down.

He isn't immune to anything.

Not the answer you're looking for? Browse other questions tagged marvel marvel-cinematic-universe comics captain-america captain-america-the-winter-soldier or ask your own question.

4
Is there any canon information about the conductivity of Captain America's shield?

6
What's the connection between Community and Captain America?
66
Why does Captain America need to exercise?
12
Who're the people Agent Sitwell lists to Captain America
21
Why are some S.H.I.E.L.D. agents referred to by codenames or numbers?
29
Why was the Captain America exhibit in the Air and Space Museum?
12
How does Zola end up like this in The Winter Soldier?