Why does Darkseid seem to specifically want Earth 2 Kal-El to be at his side?

With this answer, we learn New 52 Darkseid (and the Apokolips Pantheon) are considered unique across the universes (or at lease they themselves consider being so). In World's Finest #27, we learn from Intri that (most probably) Darkseid plans to raise Earth 2 Kal-El as a Lord of Apokolips.

My question is why is Kal-El the chosen one, considering Intri is at this very moment on a planet full of alive Kryptonians to pick from ?

And, let's say the Kal-El choice is justified (by his future self being freaking Superman, by something Darkseid could have seen in other universes, by him being a natural born Kryptonian, or else ?), why does Intri puts so much effort in trying to capture this specific version of Kal-El, as seen in World's Finest #28 and #29 after that ?

Answering the first part: Why Kal-El and not other Kryptonians?

I haven't read World's finest but according to what you have presented and a short overview of the issue, it's obvious that Intri wanted Kal-el and not the other Kryptonians. Reason is Kal-el, grew up on Earth and has manifested his powers (the other kryptonians are just kryptonians; not super-powered beings).

Now, your second question: Why Kal-El of Earth-2?

The reason is presented in Batman/Superman Vol 1. Issue 3. 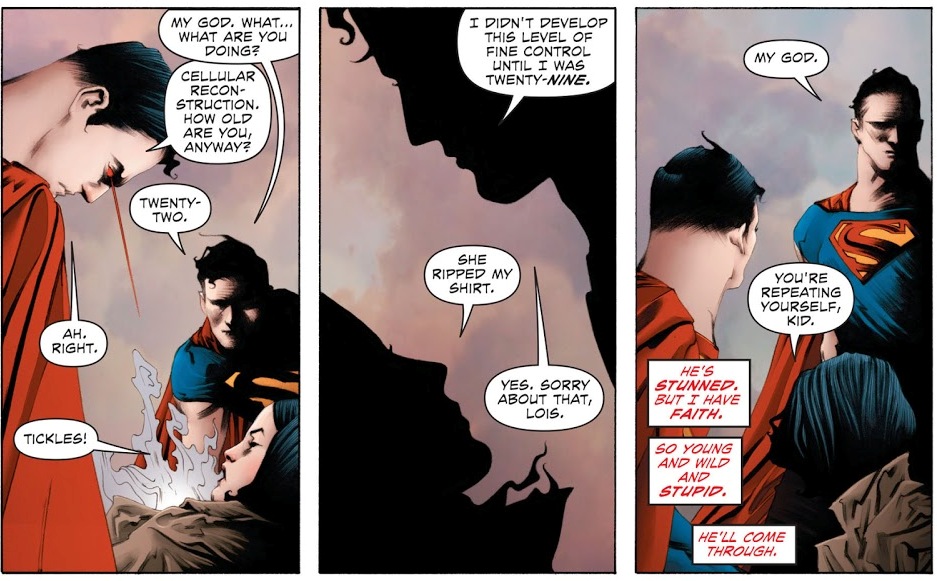 Having spent longer under the yellow sun than his Prime Earth counterpart, the Earth-2 Kal-El discovered a greater breadth to his abilities prior to his death (btw, he dies at 29. oops!). See in the snippet above. Prime Earth Superman himself says that he did not develop such levels of control until he was 29 (when Earth-2 Kal-El did it at 22).

So him (Earth-2 Kal-El) being a superior Superman (in a way) could have made Darkseid choose Earth-2 Superman over the Superman of Earth-Prime.

So, Darkseid would want him specifically due to the fact he's much, much more powerful (and cool) than any other Earth's Superman.

EDIT: As far as I knew, there is only one Kal-El: Superboy Prime. I obviously know there's many versions etc, but I thought his name spelt and arranged in that exact way was Superboy Primes exclusively.

Not the answer you're looking for? Browse other questions tagged dc comics superman the-new-52 or ask your own question.

6
In the New 52 Multiverse, are there multiple Apokolips/New Genesis?

36
Why does Earth have 4 Green Lanterns?
74
Why does Superman wear his underwear outside his pants?
7
How and/or why did the original comic book Jor-El choose Earth as the target for his son's rocket?
12
Why do the Kryptonians want to terraform Earth?
32
Why does Lex want to discredit Superman?
6
Why does Clark freak out at school when he uses his Super-vision?
10
Why does baby Kal-El's pod land in a different spot in Flashpoint?
17
In what continuity does Joker want his "g** d*** electric car"?