Back in the 90's I read a novel where Humanity has been revived by a starfish-like alien race. It seems we beamed our entire genome out into space and the kindly aliens decided to re-create the human race. The aliens are in a different galaxy.

The Aliens are sad, because humans have a really short lifespan compared to thiers (150 years for humans to 1500 years for the alien starfish) One really bright human gets access to some forbidden information and creates a virus treatment that grants most of humanity near immortality.

Humanity decides to return home, build a generation type starship that can get to nearly (but not quite, FTL travel doesn't exist) the speed of light by planning a slingshot around the galactic core. On the flyby they find the galactic core is unstable and will soon explode or collapse, destroying the entire galaxy, but due to time dilation and such, they can't warn the starfish.

They make it to earth and find that in the time between the peak of human civilization and now, Another race has risen to dominance and then fallen. Yet another race has risen, but hasn't fallen yet. They find dyson spheres and other amazing artifacts. The first was rats, the second was Dragonfly nymphs that never turned into dragonflies. These are violent and try to eat humans.

I remember two twists. The first was that the same information that led to the the immortality virus was first tested on dragonflies and stunted them. these hyper aggressive nymphs evolved into space faring bugs that eat people. The second twist was that little monkey like creatures end up being what humanity de-evolved into, because they "caught" the immortality virus and reverse aging.

The Genesis Quest gets around the problems involved with intergalactic travel, namely the distance, by avoiding the traditional staple of science fiction, faster than light travel.

Instead Moffitt opts for a different tactic, that of having an alien race (The Nar) assemble humans from a stream of genetic information transmitted by radio from the Milky Way Galaxy.

The resulting colony of humans spend some time integrated into the Nar society before growing restless, discovering the secret of human longevity, and embarking on the seemingly impossible millennia-long mission of a physical journey back to Earth. 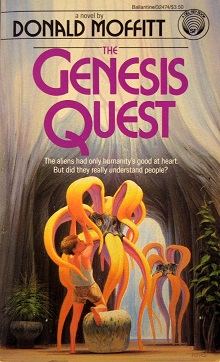 12
Distant aliens receive signal with instructions on how to construct humans, long after Earth is extinct