Looking for sci fi novel about autonomous cars that take over from people. Early to mid 1960's

Mankind has mass produced very ostentatious autonomous cars that serve us. Cars rebel and make people serve them. New cars made are square white boxes. It was a spot on satire of mankind's lust for big chrome cars but the AI piece was prescient too. Written no later then 1967.

This is The Four Day Weekend by George Henry Smith, published in 1966. 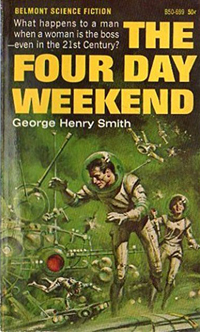 From the back cover:

THE REVOLT OF THE MACHINES

It was impossible, of course, because the machines had been ruling everything for 100 years, so what could they revolt against?

They decided people had outlived their usefulness to them, and that genocide of 4 billion people on Planet Earth was the best policy.

And into this incredible situation Charles Henry Hyde was thrust, with a shrew of a wife named Agnes who nagged like it was 1966...

At the beginning of the last chapter, the protagonists encounter plain white cars.

The cars waiting for them were unlike any Chuck had ever seen. They were completely white, even to the tread on the tires and they had no chrome on them anywhere.

"These must be the new generation," he said. "The ones they designed to please themselves."

Spoiler. It turns out that...

Aliens had reprogrammed the "Omnivac" that was controlling the cars, so the AI element was a red herring.

Possibly the children's novel The Endless Pavement by Jacqueline Jackson?

The story revolves around cars taking over the planet and making it an 'endless pavement."

Living in a time when people are the servants of automobiles and ruled by the master auto of the planet, Josette longs to leave her rollabout and try her legs.

The timing is a bit later than what you noted. I.e. 1973. But, it does talk about white vehicles. Or, more accurately red & white:

In a red-and-white striped Home-a-rolla