Why was Fleur's little sister Gabrielle even at Hogwarts?

I am surprised that I didn't find this question using the search.

Why was Fleur's little sister Gabrielle even at Hogwarts?

If I remember correctly she must have been only 8 years old, and all the other students from Beauxbatons were older than her.

She seemed to be “brought in” for the Second Task.

Fleur’s sister didn’t seem to arrive at Hogwarts with the rest of the students - we only see her at the Second Task, when she’s held as the hostage for Fleur. The other three hostages were already at Hogwarts since they were all Hogwarts students, but it seems like Fleur’s sister was brought in specifically for the task, perhaps since there was no one at Hogwarts she cared about much.

“A choir of merpeople were singing in the middle, calling the champions towards them, and behind them rose a crude sort of statue; a gigantic merperson hewn from a boulder. Four people were bound tightly to the tail of the stone merperson.

Ron was tied between Hermione and Cho Chang. There was also a girl who looked no older than eight, whose clouds of silvery hair made Harry feel sure that she was Fleur Delacour’s sister. All four of them appeared to be in a very deep sleep. Their heads were lolling onto their shoulders, and fine streams of bubbles kept issuing from their mouths.”
- Harry Potter and the Goblet of Fire, Chapter 26 (The Second Task)

After the Second Task was over, we don’t see Fleur’s sister again until the champions’ families are invited to Hogwarts to watch the final task.

“On the other side of the room, Fleur was jabbering away in French to her mother. Fleur’s little sister, Gabrielle, was holding her mother’s hand. She waved at Harry, who waved back.”
- Harry Potter and the Goblet of Fire, Chapter 31 (The Third Task)

After having saved her, Harry would be more likely (though not guaranteed) to notice her presence at Hogwarts since he “knew” her - however, she’s not mentioned as being at Hogwarts until the families come for the final task.

In the movie, though, she came in with the Beauxbatons students.

In the movie version of Harry Potter and the Goblet of Fire, Gabrielle comes in with the students, and is doing flips. 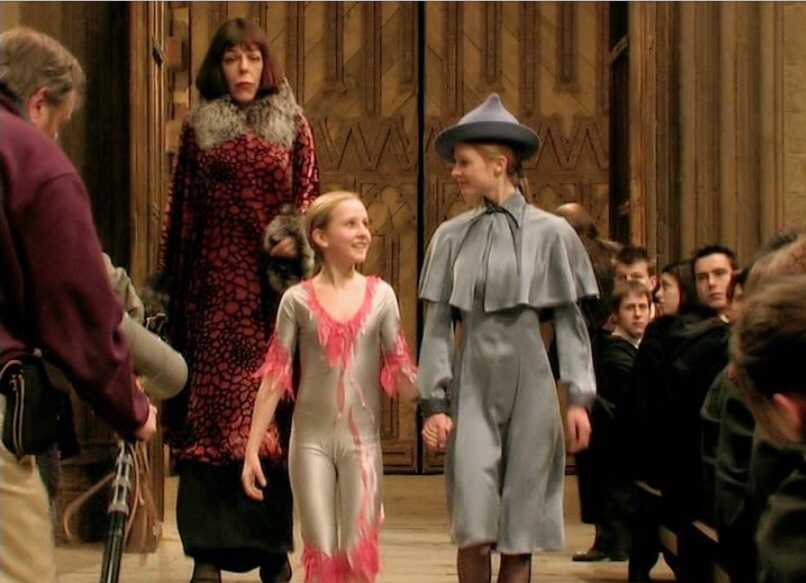 She’s also shown in the Beauxbatons uniform, which may imply that the movie intended her to be a student. 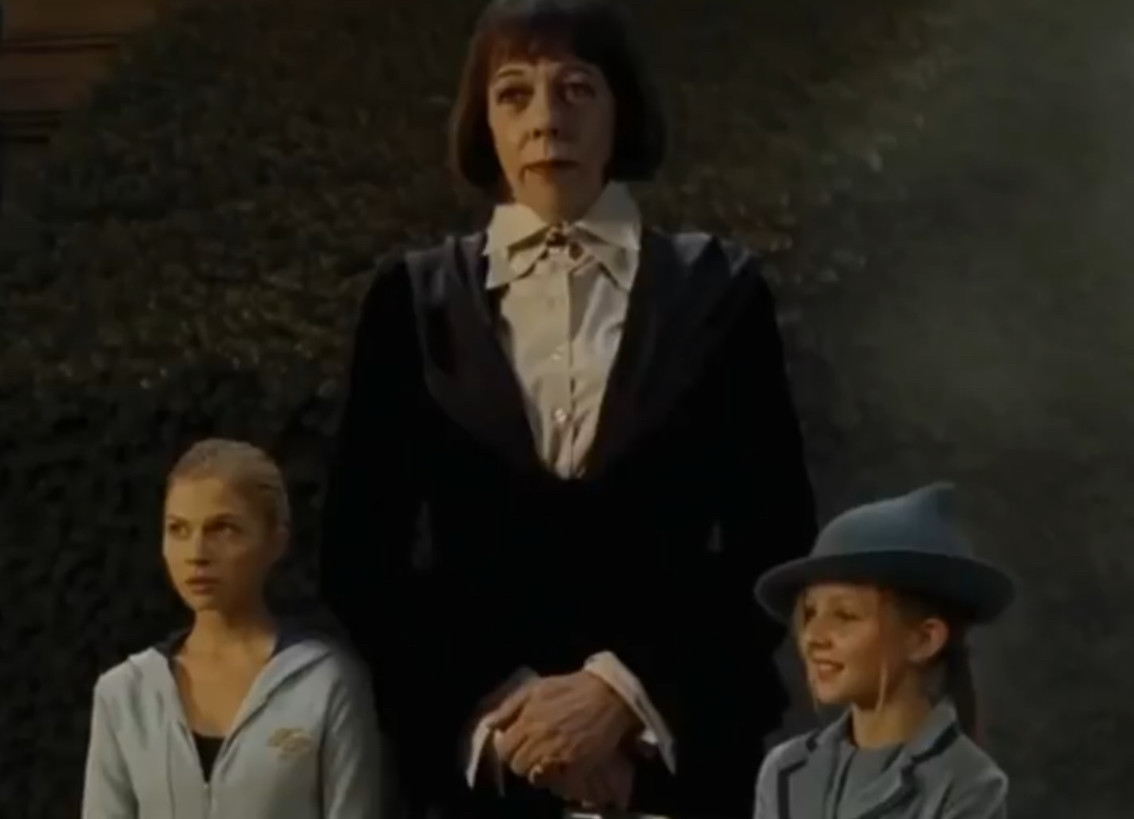 However, in the movie, there don’t seem to be any other Beauxbatons students as young as her, so if she is supposed to be a student, that would make her the youngest one brought to Hogwarts by far.

As Valorum suggests in the comments, it’s possible they suspected Fleur would be chosen as champion, and brought her sister specifically in preparation for the Second Task.

Fleur was competing as Beauxbatons' champion in the first Triwizard Tournament in ages. Although this is not mentioned explicitly in the books, surely her family would come over for the occasion, to cheer her on?

Fleur's little sister was doing gymnastics when they arrived at hogwarts. So I'm guessing she's the school's mascot since she's too young to go to the same school as her sister.

Each champion had their most precious possession -- the person they valued most -- taken by the merpeople and held for rescue by their champion. Harry's best friend, Ron, was chosen, and Hermione was chosen for Krum to rescue. Cedric's girlfriend, Cho Chang, and Fleur's little sister, Gabrielle, were also selected for the task. I imagine she was "flown in" for the task.

While there's no mention of it, it wouldn't be unreasonable to imagine that Beauxbatons takes students at a significantly younger age than Hogwarts.

In the UK we have a clear separation between Primary and Secondary School, starting at around age 11/12. Muggle France does something very comparable, but that's not to say that wizarding France might not combine the two and reduce the distinction, after all, with such a small population it may not make sense to have more than one school.

Alternatively they make take an attitude that while a wizarding child might not come into their magic until their second decade, the training may begin much earlier.

One might liken it to Ballet or learning an instrument, where in general starting younger is more desirable.

18
When was Hogwarts founded?
45
Why wasn't Professor Flitwick at the Sorting Ceremony? or, If he was, Why was he surprised by Having Harry in his Class?
42
Why was Nick surprised at Hermione's ignorance of the Hogwarts elves?
12
Why did Dumbledore instruct Mrs. Figg to not tell Harry about the Wizarding World, even up to when he was ready to be admitted?
44
Why is Hogwarts Library so badly organized?
1
Healing magic in harry potter universe?
4
Why don't Hogwarts students use fireplaces to communicate, apart from owls?
11
In Harry Potter and the Goblet of Fire, how were the hostages chosen for the second task of the Triwizard Tournament?
14
Was Ginny really used as bait because she was Ron's sister?