Who was the first metahuman in the DC Universe?

I am asking about the first super-powered human to have been born with powers in the DC Universe (as in the first one created by DC writers). So that excludes Superman (not a human), and anyone who obtained their powers as a result of some experiment or accident (such as the Flash).

So for instance, if there was an Armadillo Man (who always had the astounding powers of an armadillo from birth) from a comic in the 1940s was the first instance, that would be the correct answer. The hero does not have to still be popular or alive.

Iron Munro, would be one of the DC Universe's earliest known metahumans appearing in Shadow Comics #1 in June 1940.

Munro was the child of Hugo Danner and a Colorado woman named Anna Blake. Munro was born with superhuman powers and possessed incredible strength and invulnerability by the age of ten.

This particular version of the character gained greater notoriety after the Crisis on Infinite Earth's when DC restructured their universe and erased the Earth-2 Superman replacing him with Iron Munro. 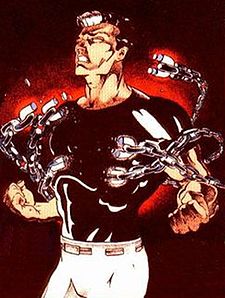 Iron Munro is a fictional superhero, who first appeared in Shadow Comics #1 (June 1940), published by Street & Smith. He is loosely based on Aarn Munro, the hero of a series of short stories written by John W. Campbell in the 1930s. The modern and better known version of the character, who started life as Arn Munro, first appeared in Young All-Stars #1 (June 1987) and was created by Roy Thomas, Dann Thomas, Michael Bair and Brian Murray. Munro is the illegitimate son of Hugo Danner, the superpowered protagonist from the 1930 novel Gladiator by Philip Wylie. However, Iron was not a character or even a possibility in the original novel. Hugo's inability to pass on his powers to his children is explained by his ailing scientist father, "the effect of the process is not inherited by the future generations." --Wikipedia entry: Iron Munro

As a side note: I reviewed all of DC's earliest properties particularly among the Mystery Men and almost all of them failed to meet the criteria due to their use of various technologies to give them their abilities. Those who were not technology users had their powers bestowed by accidents, divine forces, or medical/drug technologies.

The latest season of Young Justice seems to suggest that Vandal Savage was the first metahuman and most of all the metahumans are descendants of Savage's.

1
Why wasn't Nuclear Man born naked?
5
What exactly is Mongul from (pre-Crisis) Superman comics, and is he stronger than Superman?
4
When has Superman stunted human progress, and what prevents him from doing so?
1
Who are the rest two Metahuman characters referred in Dawn of Justice?
8
Even with his powers, doesn't Superman train and work out?
2
What is a metahuman?