The true power of Doctor Strange

I recently came across this image of Doctor Strange: 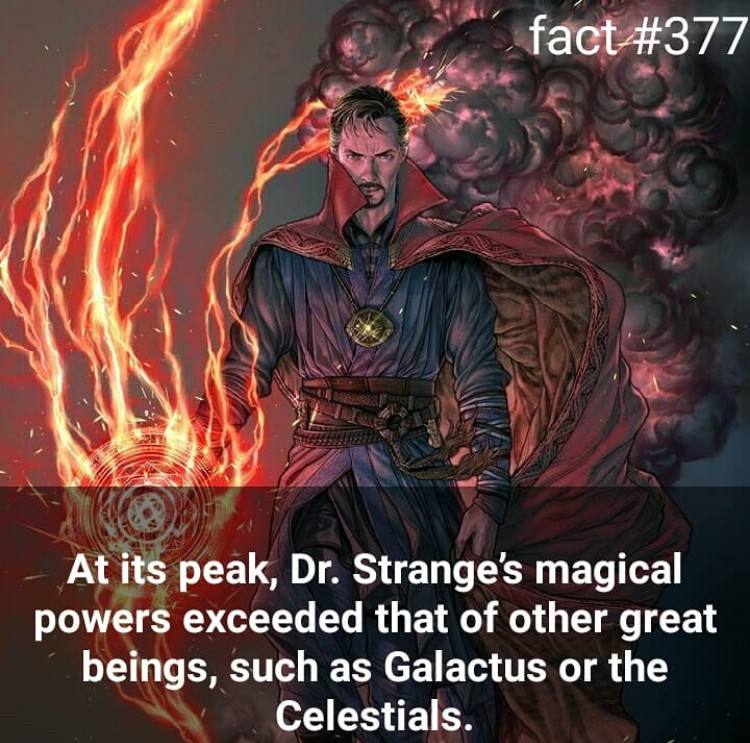 where they confidently quote that:

At its peak, Doctor Strange's magical powers exceeded that of other great beings, such as Galactus or the Celestials.

I agree that it was on social media (precisely, Instagram) and most of the facts, as they call it, may well be false and fake. But this one actually got me curious.

Is this just a false claim or could it actually be true that the Sorcerer Supreme is quite supreme. If yes, which issue/story-line could confirm this?

That's a hard call, Dr Strange being one of the most "volatile" in terms of power in the Marvel Universe.

First and foremost: the largest part of his power does not come from himself, but from the huge amount of artefacts he owns (and spells he can cast, too). Which is always easy to mess up for comics writers, as those artefacts are mostly "channels" for some magic entity power, so as soon as Dr Strange gets a cold or spends too much time at the disco, he could be too tired to properly ask the entity for the power.

Just to put things in perspective, Strange can easily destroy an entire reality because he doesn't like it, or fight the most powerful Abstracts (like the In-Betweener), but he cannot cure a cancer or even cure a bullet wound. And, he's considered (by the aforementioned Abstracts) one of the most powerful beings in the main Marvel reality, but he gets easily beaten by Hulk and admits being less powerful than Sentry; no need to say that Hulk and Sentry could easily be obliterated by any Abstract or even most of the gods.

But, coming to your question:

The key is all in the bold part: in the past (long distant past, Dr. Strange #4, 1974) Dr. Strange was able to merge with and become the avatar of Eternity, our resident manifestation of time and reality. Eternity can easily kick the butt of our big, purple,-horned planet-cruncher and, needless to say, can easily stomp the Celestials too (after all, Eternity created them with just a thought).

So, how powerful is Dr Strange? Nearly not at all, but he's very good at bargains for someone else powers :-D

Does it count as "having more power than Galactus and the Celestials? Well, that's debatable, but in a sense it's true.

Doctor Strange is a master of mystic arts. He primarily has no power himself, but draws on the power from other magickal beings and entities which is proved time and again when the entities keep mentioning the fact that they've helped him multiple times.

Then we come to the post-midnight era where he loses the good will of the Vishanti and instead learns how to draw on Gaea's powers, but again, those aren't his own. There is one instance where he loses all his mystic powers because the accountants want him to repay his debt.

He is called a master for even though he may not be as strong or even remotely strong as his foe, he can work with whatever little he has and defeat the guy somehow even if that means coming within an inch of his life.

However, there comes a time when he defeats Shuma-Gorath and absorbs his power turning him into a god when he is at the height of his power. That is when the claim might have been true, but not anymore.

Not the answer you're looking for? Browse other questions tagged marvel comics doctor-strange or ask your own question.