Fantasy about a girl transforming to a dragon, titled something like "Rigals daughter" [duplicate]

I am looking for a short story called "Rigals daughter" (or something similar) about a girl who transforms into a dragon when she touches the throne with a scepter.

"Daughter of Regals" by Stephen R Donaldson. It's in the short story collection of the same name. 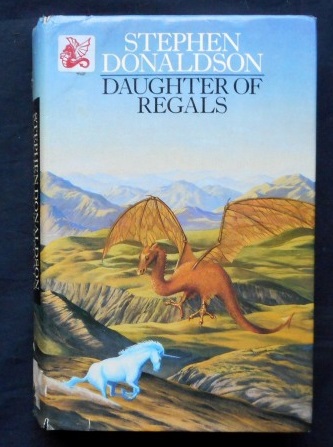 The plot is pretty much as you described.

It tells of a young woman called Chrysalis, the nominal ruler of three kingdoms who is about to come of age. To claim her throne, Chrysalis must exhibit the magical abilities of her ancestors the Regals - who combined the attributes of human men and mythical creatures - or else her dominions will collapse into civil war. While the kings of the individual kingdoms plot against her, Chrysalis struggles to release the magic inherent within her and claim her inheritance.

19
Story about girl who must become REAL to inherit throne

3
Girl turns into a dragon
12
Short story about village girl who accidentally enters a dragon and lives inside it for many years
8
Animated fantasy show about a red-haired girl and two boys
5
Help me find this supernatural/fantasy book about the daughter of a rich criminal
6
Book about girl who moves to Wales then travels back in time
7
Book about a dragon and a necromancer, set in past China/Asia
3
Book where a black dragon falls for a red-headed human girl, after she is almost killed while running away from her evil brother's men