I'm UK-based, and recall reading and loving a book series in the 1990s about:

There was definitely a futuristic vibe about them, too.

The books are long since gone from my parents' house, and no-one can remember the title or any character names, but apparently one of my homemade "Junior Credit ID" cards has survived.

This is a longshot, because the book is at my parents house currently, but my gut is telling me that this might match Marilyn Z. Wilkes's C.L.U.T.Z. books. I only read the first one, entitled C.L.U.T.Z., but it did have a sequel, C.L.U.T.Z. and the Fizzion Formula, so it barely qualifies as a "series". The basic premise is that Rodney's family needs a housekeeping robot, but can't really afford a new one, but an unemployed Combined Level Unit/Type Z (aka a C.L.U.T.Z.) robot shows up on their doorstep after having been abandoned by his prior owner.

What ensues, from my memory, is a comedy of errors due to Clutz being, well, a klutz. He's well meaning, but bumbling. I particularly remember a sequence where he fixes their holovision set by moving scoops of crystals around inside, but a subsequent attempt to fix a floating bed goes awry. Clutz gets thrown out, and Rodney follows with him. I don't specifically remember the credit card, but there's a tickle in the back of my head that Rodney takes the family one with him when he runs away.

Ultimately, Rodney winds up in some disastrous situation after his parents acquire one of the fancy "Butler" robots that are the new thing, and said robot lacks the empathy (or maybe just the programming) to help him, while Clutz does save him, resulting in Clutz becoming part of the family. 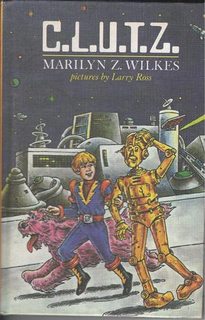 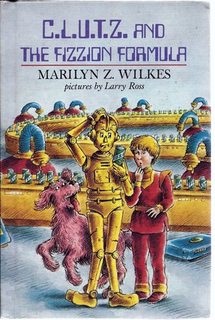 11
Scifi novel from 90's with AI, robots, and a holodeck-like room
23
Fantasy book filled with short disturbing stories
6
Trying to recall the title of a series of fantasy books about wizards with keys
6
Book Identification - Children's sci-fi book about videogame aliens
6
Book identification: children's book about family of vampires
5
Story about 2 kids with magic books