The rich playboy is dead, and he's a ghost, but his wife still loves him

I remember this one comic book way back, in the 1990s, where a man in a blue ski outfit and his wife are out shopping to get the latest ski outfits. She gets this very sexy thing, in various colors of course, and the man says no thank you to the sales girl even though his outfit is a few years out of date.

Turns out this millionaire playboy is dead. He died in a plane crash. But he's still on earth, he didn't move on to the afterlife. People can see him, he can talk to people. But he's dead. The only clothes he can wear are those he died with, so while he can take off his jacket and shoes anything else isn't happening. He also can't eat, and he's hungry, because he's a ghost, and didn't eat on the plane before it crashed and burned. But using this dark, magic, shadow power he can levitate forks, touch his wife, and even pretend to skiboard by levitation.

So they go up to a cabin in the woods and ski down the mountain, like rich people on holiday. They're attacked by a ghost thing, and they flee. The man explains to his wife that he dosen't know what that this is, except that it's not whole. It's after him for his magic, dark shadow power, or something.

I didn't get the chance to read more of the comic. So what is it?

This sounds similar to Valiant's original The Second Life of Doctor Mirage. The title character was Hwen Mirage, a doctor, his wife was Carmen Ruiz. He died in a white-and-black ski outfit, on vacation with his wife. However, he gained powers, could still be seen and heard, and was pursued (by Valiant's big villain, Master Darque), and became a superhero.

The white and black outfit tended to have light blue highlights, as you can see on the cover to the first issue: 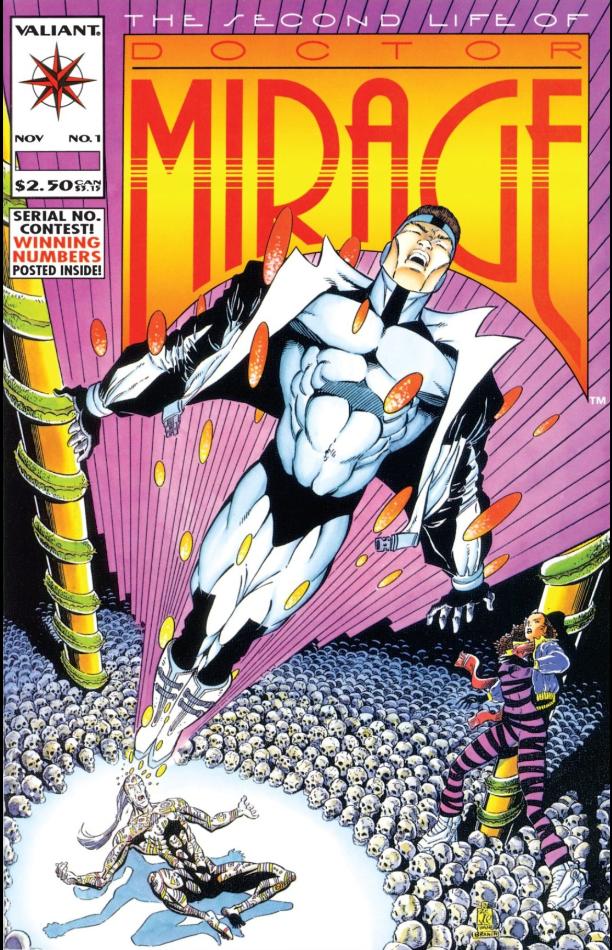 6
Comic about “the exterminator of exterminators”
4
Identify a Spider-Man comic featuring Spider-Man saving Jameson's astronaut son
12
Story Finder: Alien Steals Body, and Wife Likes the Change!
11
What's the name of that comic team with genetically engineered government agents?
6
Film, friends transferred to a parallel universe where being fat is forbidden, one of them meets his "alternate world" wife
6
Movie Identification - 80s Ghost Romance Involving A Medieval Castle?
18
1980s novel about portal to alternate dimension with energy beings, sacrifice of sentient natives, computer leech
4
Manga - the weak MC runs away from his lover... he lives in the wild and becomes strong