I can tell you straight away, it's NOT the 1982 illustrated text adventure "The Hobbit". This was out before that. It may even have been late 70s. 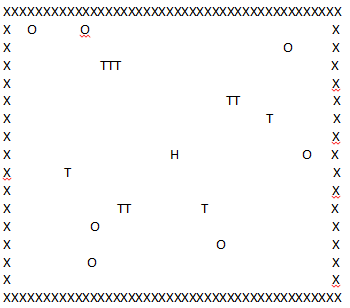 Obviously, H is you, the hobbit, each T is a tree and each O is an orc. It wasn't actually T and O for tree and orc, but I can't remember what characters were used.

Browse other questions tagged story-identification video-games or ask your own question.

11
Book identification: a planet of poisonous plants where people live in the tops of trees
4
Warlords of Draenor: Status of Doomhammer
4
1988ish PC RPG that starts with navigating a raft to shore and has a scene where a village festival gives you food poisoning
8
Book series about a young man who apprentices with a magician in a castle
7
Point and click game where there were a handful of ghosts you had to help “release”
4
Color Computer 2 fantasy game with maze and a selection of magic and weapons
4
90s (or earlier) computer game where a troll turns you into a frog
3
Steam PC game that was a combination of Diablo-style “run around and stab things” and city-building
3
Game identification: flying shooter on PC from early 2000s
8
Spooky computer game from late 90s/2000 where you fight skeleton pirates at the end