Do non-speaking animals in Narnia have souls?

In Tolkien's legendarium, humans have the unique gift of being able to leave the world after death. However, Tolkien's friend C. S. Lewis had a different conception of the afterlife in his novels. At the end of The Last Battle, the righteous characters find their way to heaven, Aslan's country. This includes humans, centaurs, talking animals and others; they all have immortal souls. And Lewis expressed the same view in his Space Trilogy; the several species of aliens that live on Mars are spiritually coequal to the humans that populate Earth (and Venus).

I just realized though, that this raises a question, because the speaking animals of Narnia can lose their human-like intelligence, if they abuse it. This is mentioned in The Magician's Nephew, when Aslan grants speech to some if the animals. (This appears to be a rare instance of intentional foreshadowing in The Chronicles of Narnia. Lewis rarely had plans for more after the completion of each novel. The exceptions were with The Silver Chair and The Horse and His Boy, for which the writing and editing overlapped; and Lewis was clear that he would not end the series on the prequel The Magician's Nephew.)

Sure enough, in The Last Battle, this actually happens to one of the villains. Ginger the cat loses his power of speech and slightly anthropomorphic shape for his crimes. But what, then, happens to his soul? Is it irrelevant, the souls of Narnia's damned being shortly to be destroyed anyway, when the world comes to an end? Is that consistent with Lewis's Anglican theology? Did the author simply overlook this issue, or did he ever comment on the matter?

It seems as though non-talking animals have no souls or afterlife.

From The Last Battle, Chapter 14, "Night Falls on Narnia" (emphasis mine):

The creatures came rushing on, their eyes brighter and brighter as they drew nearer and nearer to the standing Stars. But as they came right up to Aslan one or other of two things happened to each of them. They all looked straight in his face, I don't think they had any choice about that. And when some looked, the expression of their faces changed terribly - it was fear and hatred: except that, on the faces of Talking Beasts, the fear and hatred lasted only for a fraction of a second. You could see that they suddenly ceased to be Talking Beasts. They were just ordinary animals. And all the creatures who looked at Aslan in that way swerved to their right, his left, and disappeared into his huge black shadow, which (as you have heard) streamed away to the left of the doorway. The children never saw them again. I don't know what became of them. But the others looked in the face of Aslan and loved him, though some of them were very frightened at the same time. And all these came in at the Door, in on Aslan's right. There were some queer specimens among them. Eustace even recognized one of those very Dwarfs who had helped to shoot the Horses. But he had no time to wonder about that sort of thing (and anyway it was no business of his) for a great joy put everything else out of his head. Among the happy creatures who now came crowding round Tirian and his friends were all those whom they had thought dead. There was Roonwit the Centaur and Jewel the Unicorn and the good Boar and the good Bear, and Farsight the Eagle, and the dear Dogs and the Horses, and Poggin the Dwarf. 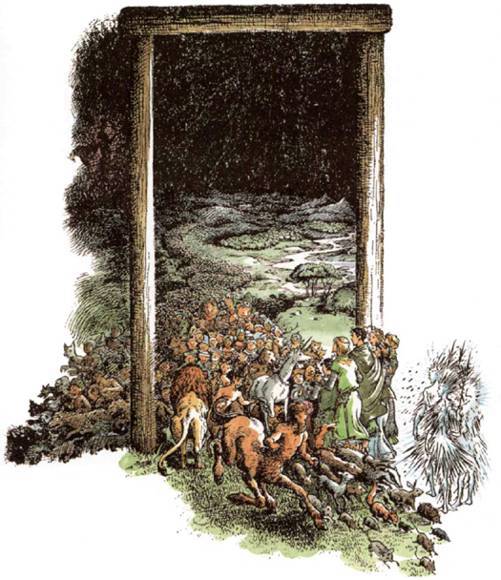 This is the moment when the entire world of Narnia is being destroyed, and its creatures are coming through the great door (which was once merely a stable door, and by now has become the portal between life and afterlife). Those who died now appear in "Aslan's country", signifying that for the others too it's the end of their mortal life.

But for each of these creatures, there are two possible outcomes, depending on whether they love Aslan (God) or hate him. Those who love him enter the afterlife with the rest, while those who look upon him with "fear and hatred" are condemned to darkness. The best possible option for them would be that they do enter an afterlife, just a different one - but in context, that doesn't seem likely. The image, too, makes it look as though they're disappearing into a great black hole, something akin to hell.

This, then, is the fate of the Talking Beasts who are not 'worthy' and cease to be Talking Beasts. It seems likely that those who were always "just ordinary animals" suffer the same fate: lacking immortal souls, they descend into dark nothingness when their world comes to an end.

Remember that there had been a battle between gods going on prior to all this. A lot of the latter half of The Last Battle saw the creatures of Narnia trying to decide between Aslan and Tash (the god of the Calormen). Shift the Ape (having had his lie that Puzzle, wearing a lion skin, was Aslan fall apart) had started to claim that Tash and Aslan were one and the same (they literally start calling him Tashlan)

Ginger is an Atheist at this point, believing in neither Tash, nor Aslan. At the point he enters the shed, he's involved in the conspiracy against Tirian to overthrow Narnia. Ginger walks into the shed (expecting to only see a Calormene soldier) and encounters Tash himself.

Ginger lost the ability to make any further choices with a rational mind, but the implication Lewis is making is that Ginger had already chosen, he simply got stuck with the one he had made. It's important to note that those who joined Aslan, did so because they chose him. The split at the end (where some become unintelligent) is analogous to the Christian teaching of the Sheep and the Goats

But when the Son of Man comes in his glory, and all the holy angels with him, then he will sit on the throne of his glory. Before him all the nations will be gathered, and he will separate them one from another, as a shepherd separates the sheep from the goats. He will set the sheep on his right hand, but the goats on the left.

The animals who ceased to be intelligent got locked into their choice, just as Ginger had.

They all looked straight in [Aslan's] face, I don't think they had any choice about that. And when some looked, the expression of their faces changed terribly - it was fear and hatred: except that, on the faces of Talking Beasts, the fear and hatred lasted only for a fraction of a second.

Since they were left in that state, in the decimated Narnia (remember the door freezes over), its presumed that they perished or were simply left in that state for all eternity (Lewis leaves that point untouched). Being a children's book, the former is what is implied (Lewis did, however, believe in in the Christian doctrine of Hell, as he wrote The Problem of Pain, which defended the idea).

The point wasn't that they lost their souls. It was that they had chosen their fates and had to live with the consequences.

34
Are the "wood between worlds" and Aslan's Country related in some way?
21
Why did C.S. Lewis use Turkish references including "Aslan"?
42
What does Aslan mean about being a bridge builder in our world?
58
Was C.S.Lewis, through Aslan, referring to nuclear destruction?
11
At what point did C. S. Lewis decide that humans were a normal part of Narnia's world?
11
What became of the rings buried in the Magician's Nephew?
42
How did Jadis, The White Witch, obtain the right to kill a traitor in Narnia?
14
Is the repetition of "faster than you can say Jack Robinson" deliberate in C.S. Lewis' books?
13
Are these two groups of trees the same in the Chronicles of Narnia?
24
What is meant by "Polly went down and had her bath; at least she said that was what she'd been doing..." in The Magician's Nephew?