I've been trying to find a movie (or potentially a series or trilogy - I definitely didn't watch the whole thing and seem to recall having missed a movie or two) that I think I saw on the SyFy channel maybe around 2010-2012. All I can really remember is that it was set in a high fantasy world (almost Lord of the Rings, aesthetically) and one of the main characters was this woman (long dark hair, flowy dress I think) who looked human, but was actually some sort of siren-type magical being. Basically, she could ensnare men by making them fall completely in love with her, and I think it was permanent. She had a man she was in love with, but they couldn't actually be together because doing anything together would have placed him under her spell and robbed him of his free will. And there was apparently a way to get rid of her powers, but they were integral to the plot for some reason so they couldn't.

Later, their quest party finds another girl, a little younger, blonde, who's the same type of being with the same powers. Hurray, maybe the first woman can finally be free, at last! There's some backstory where the blonde girl's mother died in childbirth and her father, freed from the spell once she was dead, had his servants chuck her body in the street because she had enchanted him.

So this second girl has a guy that she also likes, but ends up enchanting the first woman's love interest somehow. She's heartbroken, it's no good for anybody, etc. So the blonde girl tells the man to sleep with his actual girlfriend (I think this is the way the dark-haired woman would lose her powers? There was some reason for it) because he'll follow her orders. But the dark-haired woman refuses, because he would only be doing it as an order, and he'd be thinking of the blonde girl.

That's really all I remember. There may or may not be a dragon. Any help is appreciated!

As @Harry Johnston commented, I'm fairly sure the show (a series with 2 seasons, rather than a movie) you're looking for is

Legend of the Seeker

based on the The Sword of Truth series by Terry Goodkind.

one of the main characters was this woman (long dark hair, flowy dress I think) 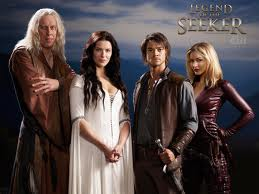 she could ensnare men by making them fall completely in love with her, and I think it was permanent

Kahlan is a confessor, a woman who has a form of magic that lets her control people which is used as punishment for serious crimes in the Midlands. When a person is confessed they become utterly devoted to the confessor and lose all free will and sense of self. This is indeed permanent, expiring only on the death of the confessor.

there was apparently a way to get rid of her powers

There's a magical collar, a Rada'Han, that suppresses the wearer's connection to their magic. It's temporary, so I never really understood why she couldn't have just worn one in order to do what she wants with Richard without any fear of consequences, and taking it off when her powers were needed for plot reasons...

She had a man she was in love with, but they couldn't actually be together because doing anything together would have placed him under her spell and robbed him of his free will

In particular the man she was in love with was Richard Cypher (second on the right in the above image). Even leaving aside Kahlan not wanting to rob him of his individuality for personal and ethical reason, Richard was the titular Seeker [of Truth] with an important destiny to carry out which he could not perform if he were to be confessed.

Later, their quest party finds another girl, a little younger, blonde who's the same type of being with the same powers ... [she] ends up enchanting the first woman's love interest somehow

On second thoughts the blonde was probably a different Mord-Sith, named Denna and played by Jessica Marais. The Mord-Sith are a bit less wholesome, and use magically assisted torture to "train" individuals to obey them. Denna proceeds to do this to Richard, and uses him to capture Kahlan.

This is slightly different in the show, but fairly close:

Richard struggles with his conditioning and having captured Kahlan for Denna is worried he won't be able to resist at all for much longer. He asks Kahlan to confess him as he'd rather be Kahlan's slave than Denna's, but as previously mentioned that would scupper his chances at fulfilling his destiny and doom the Midlands to tyrannical rule evermore - it's him that would lose his 'powers', rather than Kahlan. For the same reasons as above, she refuses.

The backstory about a confessor mother dying in childbirth and the father unceremoniously disposing of the corpse because he was ensorcelled by her also rings a bell, but I can't remember exactly which character that related to, and the internet isn't helping me remember!

19
Trying to remember the title of a fantasy teenage aimed novel I read in the mid-1990s
1
Trying to identify zombie movie from 80's or 90's
11
A cartoon/anime with a blonde-haired boy with blue eyes and his father(?), they're looking for 7 gems/diamonds
23
Trying to find the name of the movie where young men entered a cyber world and meet a girl with pink hair
5
80's-90's sci-fi kids movie (possibly a live-action Disney), two alien girls stranded on Earth in a ranch/farm
7
Cartoon TV Show About Three Kids and Monsters and a "veil" between realms
6
Soviet Sci-Fi movie from the '60s(?)/'70s(?)
2
Book series involving a teenage girl whose mother doesn't let her leave the house, until the day her mother disappears and two men attack the house