What would happen if a mortal possessed all 6 Infinity Stones?

In the Marvel Cinematic Universe we know that no regular mortal can use the Infinity Stones and survive. This is indicated in Guardians of the Galaxy and was discussed here.

Whoever holds all six Gems and uses them in concert gains omnipotence and omniscience.

So what would happen if a human used all six Stones at once? Would he die from the effort, or would the Stones granted powers save him?

(I am asking about how the Stones' powers work - do the Stones' effects take place first, thus granting omnipotence before the user will die, or does the energy drain take place first killing the user? - and thus I believe this answer to be answerable from canon and not merely an opinion based 'what will happen'.)

Following the events of Avengers: Endgame we have 3 examples of users wielding all 6 Infinity Stones, either through the Infinity Gauntlet or the Nano Gauntlet. First we see Thanos who is strong enough, with the Gauntlet, to take all of them at once. However, he isn't human or even a normal Titan so is somewhat ruled out by the premise of your question. Even so after he uses all the Stones at once, for the Snap in Avengers: Infinity War, and to destroy them in Avengers: Endgame, he takes a lot of damage to his left arm and the left side of his body in general.

We then see Smart Hulk, use them to reverse the effects of the Snap with the Nano Gauntlet. Not sure if he would count under "normal mortal" or not. Even so the effect is very strong on him and he struggles to reverse the Snap (though this may be because he was trying to save Nat too).

After the fact his arm is in a sling and the damage to it is irreparable.

The last example we have is of Tony Stark, Iron Man, who uses a gauntlet built into his suit via nanotech to Snap and dust Thanos, his Children and his armies. Because of the effects of the Snap he dies as a result.

It's worth noting though that most of the effects here come from the actions of using all of the Stones at once and not simply wearing them. Whilst there is an initial power surge, should they overcome that, as Thanos and Tony did, and Smart Hulk would have done if not for the earlier caveat, it would seem like they should be able to possess all 6 at once. However, should they use them all then the Stones will take a massive toll on them.

There’re divergences between the MCU and comics regarding restrictions on the Infinity Stones.

Specifically, the restriction for humans not able to use it does not exists in Marvel Comics. The human character and villain The Hood manages to use 3 of them without any specific consequences over a sustained period of time.

While in Ryker's Island, Hood befriended an Inhuman named Ertzia and learns the location of one of the Infinity Gems. Once out Parker Robbins hires several people to take him to the former location of the Inhuman secret city, Attilan. After eliminating them, he locates the Reality Gem. Some time before, the six Illuminati locate the Gems and each member takes possession of one to make sure they would never again fall into the wrong hands. But Black Bolt is dead, and the royal family did not know about the gem he had hidden when they moved the Inhumans off of Earth, thus it was left unguarded. Using the Reality Gem, the Hood swiftly uses it to steal the Power Gem from Reed Richards. His quest next takes him into conflict with the Red Hulk and the Avengers.[57] Hood later targets the other Illuminati members for the other Infinity Gems.[58] At a later point in time, Robbins uses the Reality Gem to heal Madame Masque's face.[59] The Hood uses the red (Power) and yellow (Reality) gems to steal the purple (Space) gem from Iron Man,

So in comics the answer is a human can wield the 6 Gems. In the MCU given the shown events with just 1 Stone, it is very likely the human would be consumed before actually becoming omnipotent.

Thanos becomes nearly omnipotent, and challenges the Silver Surfer and Drax the Destroyer,

This is further indicated by the fact that The Living Tribunal is able to decree that the gems can’t be used in unison (which contradicts the being with all 6 being omnipotent). 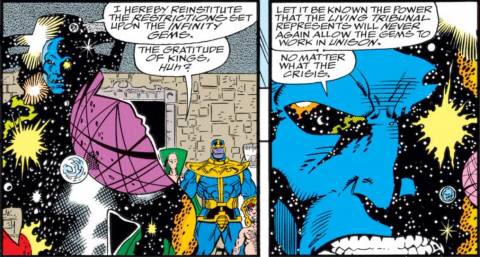 This will later come in place when Captain America tries to use them and even though he destroyed another universe, the gems were scattered and destroyed (something that would simply not happen if you are omnipotent).

Captain America uses the Infinity Gauntlet to push the other universe back, but because of the decree that the Gems cannot be used in unison, the Gems shatter, except for the Time Gem which vanishes

10
In Endgame, why didn't the Hulk's arm regenerate?
18
What is required to wield an infinity gem?