Read a book, probably about 20 years ago now, and I cannot recall the title, nor the author... and honestly, I only have sketchy details.

The book about humanity in a galaxy where they had found a pre-existing fixed point FTL network. Humanity had been using it for awhile, and then things started going wrong. There is something about the network having been created by aliens for nefarious purposes.

The book had "Dragon" in the title somewhere, and the cover (I can only remember the overall 'feel'), was 1970s-1980s ish. It was not necessarily a popular book, but the story was actually pretty good, from what I can recall.

Wish I had more to go on, but that is all I can remember at the moment. I have been trying to recall this book for YEARS. Thanks for any help you can provide.

The Dragon Never Sleeps, by Glen Cook. Here's a scan of what I believe was the original cover art from the first paperback edition. 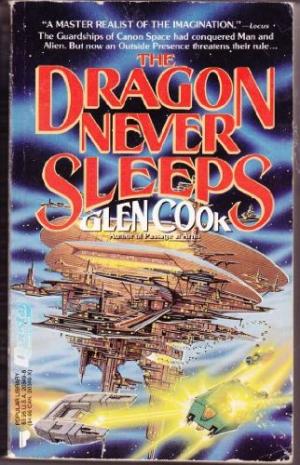 It was first published in 1988, which fits your belief that you read it about 20 years ago, and that it was probably first published well before that, in the 1980s or earlier. I'd call it a good example of "space opera" (much in the same way that the Star Wars franchise qualifies).

As you said, the human race has become dominant in the known portions of the galaxy -- a region called "Canon Space." (Although I don't remember how many worlds they'd colonized, nor what percentage of the entire galaxy this territory represented -- perhaps Cook never gave such statistics?) Some incredibly high-powered warships known as Guardships are dedicated to keeping things stable, and have been for many centuries. They certainly don't allow any of the non-human sentient races to get the upper hand in interstellar affairs. (Although such races certainly exist!)

The Guardships -- and, I believe, many less-powerful starships belonging to other groups -- all enjoy the use of an ancient FTL network. It's called "the Web" because it actually looks like a spiderweb -- long strands connecting different solar systems into one vast network. As you said, the Web must have been created before the first human explorers ever came along and learned how to utilize it, but details of how and why it was built were unknown as the story began.

Of course, we humans being what we are, everyone did not see eye-to-eye regarding the way things were currently being run. The Guardships and their crews were not universally loved. The story had ambitious local governments, feuding political factions including wealthy aristocratic families, secret agents conducting covert operations, characters who were clones, characters who represented other types of genetic engineering, artificial intelligences (at least some of which were basically the "ghosts" of people who no longer inhabited flesh-and-blood bodies), mysterious aliens, big space battles, discoveries of ancient secrets, and all the other fun stuff that one should expect of a space opera. The plot moved along pretty quickly, since Cook was evidently bound and determined to wrap it all up in a single volume.

A few years ago I had a chance to pick up a paperback copy, cheap, at a sale. I hadn't really been aware of this book before, but I found it enjoyable. I wouldn't put it in the same class with Frank Herbert's Dune, but the complicated plot did seem well thought-out. That's different from the feeling I sometimes get when I read a fast-paced fantasy or science fiction novel in which the main characters run from one bizarre situation to the next, and I end up suspecting that the author was literally just making it up as he went along!

I see Amazon now has this book available on Kindle for $9.99. Which, frankly, strikes me as high. (Quite a bit more than I paid for my paperback copy.) Or you could order a secondhand copy of a print edition, and save a few bucks even after Shipping & Handling is added in -- if you're willing to wait for it to arrive in the mail. I probably would do it that way, in your shoes, but of course it's your choice.

Not the answer you're looking for? Browse other questions tagged story-identification aliens dragons ftl-drive or ask your own question.

4
What is the work that had FTL travel but no FTL communications?
12
I thought I was looking for William Gibson's Neuromancer, but I was wrong
2
Looking for a book where computers communicate with dead souls
5
I've been looking for a sci-fi book for ages. Title included Olympia/Olympus, featured VR
5
Looking for Author/Title of dystopian short story on organ trafficking where foreheads are stamped
13
Looking For Title of Circa 1990s English-Language Sci-Fi Film
9
Looking for title of a sci-fi book about dystopian future with implantable devices