How did Skeletor lose to He-man when he had powers of the universe?

In the Film Masters of the Universe, how did Skeletor actually lose against He-man when his staff was broken in two by He-man's sword? He had the powers of the universe which supposedly nothing can rival including Grayskull?

Is this a case of good guy always win* vs bad guy?

I don't see where it's formally stated that Skeletor would receive powers of the universe beyond Grayskull. In fact, in the beginning of the film, when Skeletor has the Sorceress imprisoned, he says:

While she remains in prison within this field, her powers increase my own. And when the moon reaches it's zennith, the 'Great Eye' will open, and all the powers of Grayskull will be bestowed upon me!

Also, near the end of the movie, Skeltor addresses the Sorceress again:

Do you hear Sorceress? The final moment has come. All the forces of Grayskull, all the powers of the universe will be vested in me! Me! And you, will cease to exist!

The powers of the universe and Grayskull seem to be synonymous.

It's worth noting that throughout the movie, Skeletor never wanted anyone to kill He-Man. The people of Eternia believe and wait for He-Man to defeat Skeletor. Killing him would only make him a martyr, a saint. He stated that he wanted He-man broken, even as a slave before all of Eternia, kneeling before him. Then, Skeletor would personally kill him.

A few selected quotes from the final scene of the movie:

When the 'Great Eye' opens, the people of Eternia shall see you kneeling to me, just before you die!

People of Eternia! I stand before the 'Great Eye' of the Galaxy, chosen by destiny to receive the powers of Grayskull! This inevitable moment will transpire before your eyes, even as He-Man himself bears witness to it. Now, I Skeletor, am master of the universe!

More interesting is the lackluster display of what the powers of the cosmos, the alpha and omega, the god-like status that the "master of the universe" is given to Skeletor. This is truly maybe where we see how the Skeletor in the 80s cartoon series comes to fruition in the movie. 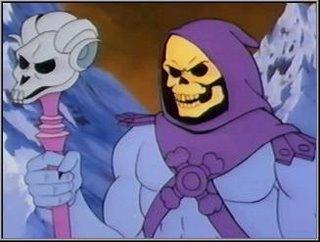 Earlier in the film, before he becomes a golden warrior, we see Skeletor, upset, disposing one of his henchmen, Saurod, with a bolt. Killing him. Vaporizing him. Skeletor seems pretty strong, evil, and unforgiving here. 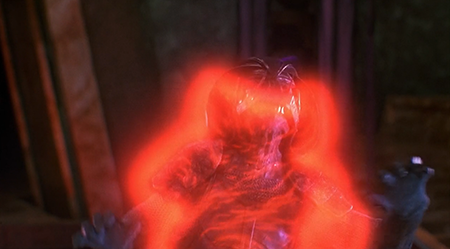 Yet, once he is granted god-like powers, he is unable to cause enough harm to He-Man to break him enough to kneel! He can't destroy a pilar that He-Man hides behind-- although he weakened it enough for him to push over onto Skeletor's minions. 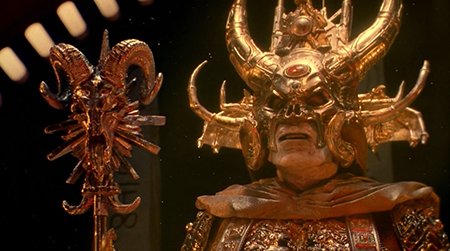 Nor is he able to even stop He-Man from lifting the sword of Grayskull with these golden bolts! 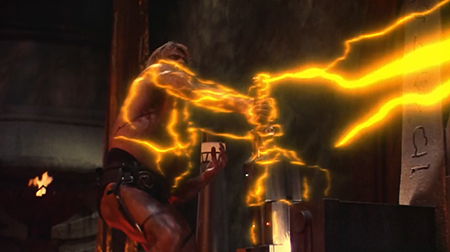 But something that the movie seems to downplay a bit until the final scene, is the significance of the sword of Grayskull.

I have the power! 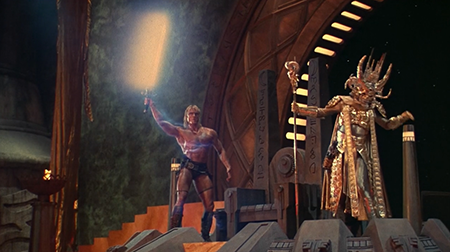 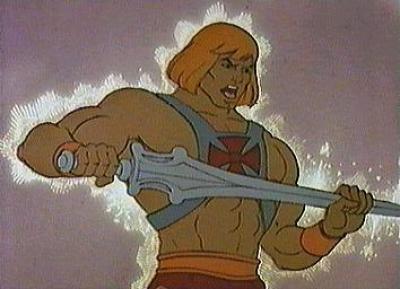 This seems to give strength to He-Man, and probably puts him at an advantage.

To answer your question, Skeletor doesn't seem to have that much power as a master of the universe. Yes, he got a costume change, his bolts went from purple to gold, but he isn't able to impose his will on anyone, anymore than before. Even Evil-lin and his henchmen were running away before the fight was over! Once He-Man gets the sword of Grayskull, it's pretty much over for Skeletor. It should be no surprise either that this same sword cut the staff in half-- essentially removing Skeletor's newfound "powers".

I know this is old, but here is another idea...

A god, even one of a cosmic level needs the energy of others to perform their feats of power, requires something that seems eternal, the faith of others. Skeletor could yes garner power through fear, hate, darkness and despair eventually these things give way to more powerful emotions and beliefs: courage to face ones fear, love to combat the hate, light to see through the darkness, and hope of something more than despair can bring. See Skeletor refused to hear what the Sorceress said about the light. "I can never be eclipsed." She wasn't talking simple astrology, but the will of the universe and all the lifeforms that are in it. Skeletor and He-Man were not fighting as men, but as embodiments of all the opposing universal forces.

As long as the universe exists and all lifeforms exists, the balance of opposing forces in the end will be maintained because of the will of all lifeforms.

Not the answer you're looking for? Browse other questions tagged movie he-man masters-of-the-universe or ask your own question.

11
1960s(?) Sci-fi movie about a caped man called the 'Prince of the Universe'
13
An animated sci-fi movie with a fully armoured antagonist and a pale looking child
3
Has Iron Man ever had a suit without flight, and if so, how effective was it?
3
How fast did the Aniara travel?
2
True or False: Is there a New He-Man and the Masters of the Universe film coming?
1
How did people learn that Tommy was an alien in the movie The Man Who Fell To Earth?
21
Identify 2000-2010 movie: a group of people are isolated in a complex, and forced to kill one another to survive