There is a short series of novels set primarily along a river in the US Midwest. Probably the Missouri River. It isn't obvious for quite a while that the world is post apocalyptic, though there are numerous ruins, if I remember correctly. The society has only primitive technology. The society is very small. Over the course of the novels a trek/quest reveals a larger world. There is no magic or supernatural element. No alien invasion or similar. Just a run of the mill apocalypse.

The main idea is coping with a collapse of civilization and technology.

This is not The Long Tomorrow by Leigh Brackett. And not by LeGuin.

I seem to remember three books. The series is older, possibly quite old. I think it is likely an obscure work and it may be that the author wrote little else than this series.

I have a sneaking suspicion that you are remembering the series of seven books by Paul O. Williams which is collectively called The Pelbar Cycle. Many years ago, I picked up a used copy of the first volume: The Breaking of Northwall. I later read some of the sequels. If you click on the "Paul O. Williams" link, it will take you to his Wikipedia page, which informs me that all seven volumes were first published in the 1981-to-1985 range, and that he only published two other novels in his entire career. (Along with several volumes of poetry based on Japanese forms.) This fits well with your idea that a) this is an old series, and b) these books (and their author) have gradually sunk into obscurity in the decades since those novels were first coming out.

Here's a scan of the same cover art that was on the copy of Book 1 which I picked up in a used-book store. It might ring a bell for you. 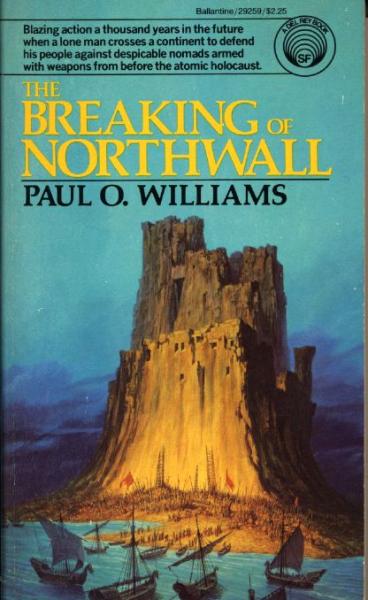 "Northwall," featured on the cover, turns out to be the name of one of three fortress-cities located alongside the Mississippi River and belonging to the female-dominated culture called the Pelbar. (They don't call that river "Mississippi" any more -- the names have changed. It is "the Heart River," probably because it runs through the middle of the continent, with many lesser rivers merging into it along the way.)

In what I remember from those books, in a post-nuclear war world, technology and political science everywhere have regressed to much earlier dates than where things were in the USA of the late 20th Century, although not everyone has regressed equally far. West of the Heart River, for instance, in the Great Plains, there are multiple tribes which live very much like the old Plains Indians did, but there are other city-states and such, in various parts of North America, aside from the Pelbar fortress-cities. The first few books tended to have one young man or another, from one of those Pelbar cities, traveling around to explore other places, make new friends, and have various adventures.

Also, as you might guess from the choice of words in the title "The Breaking of Northwall," the later part of Book One has Northwall being placed under siege by another well-organized government which is much more militaristic and aggressive than the Pelbar people, and has some serious artillery available for trying to smash a hole in Northwall's outer wall.

This does not mean that the defenders of Northwall don't have some very clever tricks of their own, however -- they may not be would-be conquerors, but they aren't diehard pacifists, either. They just want to be left alone, and they will fight to defend their preferred way of life!

So if I were you, I'd get hold of a copy of The Breaking of Northwall, read (or reread) it, and then decide whether or not I wanted to continue. (In actuality, back around the turn of the century, I think I got three books into the series and then lost interest after glancing at the fourth. I don't remember exactly why my interest was fading so fast -- it's been too long.)

9
Post-apocalyptic novel: an astronaut returns to an Earth reverted to the stone age

25
SF novel with "keepers of knowledge" who have to answer any question they're asked, but everyone else has to answer the questions they ask
3
Seeking Title/Author of Post-Apocalyptic Novel Involving Vampires
11
Identification: an episodic post-apocalyptic novel from around the 1960s/70s about events that led to downfall..
6
Series of novels with immortal man and tribes with horses / telepathic cats in post-apocalyptic US
6
Novel series with ritual cannibalism and flesh essential for life