In 1972-73 I remember reading a novel I found in the children's section of a local public library, which was a science fiction tale about drilling deep into the Earth's crust, loosely based on a real American drilling project of the 1950s/1960s known as Project Moho. The real project was an unsuccessful attempt to penetrate to something called the Mohorovic Discontinuity Layer, deep underground.

As far as I remember there were other novels in the series, all of which were set in Outer Space and involved voyages of exploration to different planets in the solar system; but I think the Moho Project was the first story in the series. I recall there being about half a dozen books altogether.

There wasn't much linking the various stories, except that they all featured pretty much the same characters (AFAIK there were three or four regulars, all male and all adults).

Unfortunately I can't recall the name of the author. And apart from a vague recollection that the title of the first book made some reference to the Moho project (and may have referred to it, somewhat inaccurately, as 'Project Mohole'), I can't recall any of the titles.

Project Moho was a real life scientific investigation that began in the USA in 1958. As the first book was based upon it, the novel must have been written after 1958 - but sometime prior to me reading it in 1972/73.

Can anyone suggest either a possible name for the author, or for the title of the book? Thanks for any suggestions.

You're thinking of Hugh Walters and his "Chris Godfrey of U.N.E.X.A. (United Nations Exploration Agency)" series. The eleventh volume was The Mohole Mystery, published in 1968. I'm afraid the entire series is long out of print. 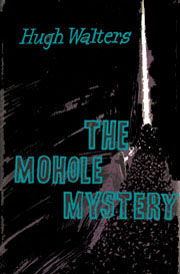 A drilling project in Dudley in the West Midlands region of the United Kingdom hits a cavern 20 miles beneath the surface of the Earth and detects strange microbes. UNEXA send Russian Serge Smylov down to search for other forms of life in a rocket-propelled capsule but it is damaged when it hits the bottom of the cavern. Then strange creatures start attacking him...

7
60s/70s story about English people (Chris et al?) going to Mars and hibernating on the way

12
I thought I was looking for William Gibson's Neuromancer, but I was wrong
5
Science Fiction Novel with two Androids on a "New Earth" planet; named The Admiral and The Sergeant
7
Three interconnected stories with main character going off the grid and drilling into the earth
6
Sci-Fi story where a weapon is named the "Fuerstenberg" rifle towards near the end
7
Seeking to recall the title of a required reading Sci-Fi collection for high school during the 80's?
9
First person Star Wars book about a Corellian who found out he had the Force
7
Magic power related to names
14
Trying to rediscover a novel about device decryption and SETI