80s-90s novel about reptilian overlords, with "east" or "west" in the title

Novel about a parallel world where the dominant species is reptilian. Some humans (or a human?) are captured and their way of life is threatened. Very severe race with different clans at war with each other.

Not much to go on here, but this might be West of Eden (1984) by Harry Harrison. The protagonist is a human(ish) who was raised by the dinosaurs who had recently discovered and begun to colonize what we'd think of as the new world. As a young adult, he is "rescued" by another group of humans, and has to adjust to living among his own kind, then to act as an intermediary between the humans and the dinosaur folk.

There was also a sequel that retconned around the fact that humans (in our world) descended from African apes, so shouldn't have occurred in a world where the dinosaurs never relinquished the Old World.

That will be West of Eden by Harry Harrison, first published in 1984. It's an alternate history in which the dominant species on Earth is indeed reptilian. 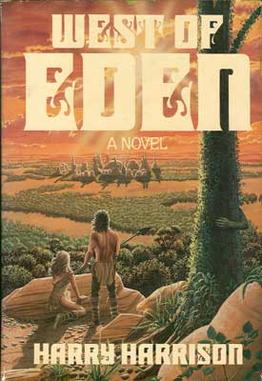 The intelligent reptiloid species is called the Yilanè, and represents the dominant life form on most of the planet. However, during the evolutionary process, the species became non-viable on the North American continent and Caribbean area, leaving them free of Yilanè for millions of years and opening an ecological niche for a top predator. A human-like species, the Tanu, evolved to fill the niche in North America, but are only found on that continent. Unlike humans, which evolved from African primates, the Tanu have evolved from a lineage of New World monkey. By the time the novel begins, the humanoids have reached a late stone age level of technology and culture, with a number of societies having developed farming skills.

11
Interstellar humanity enslaved by lizard like aliens
11
Looking for a book with parallel universes like pages, possibly with "maze" in title, and a black Jewish female character
7
Fantasy novel about a world with mechanical dragons
7
80s (or earlier) short story/novel, alien planet with a sentient species' youngster becoming harlequin to act as an ambassador to the protagonist
10
Sci-fi novel with lizard people running the government
5
Sci-fi novel about a planet with a semi-intelligent tree-like species, and a golden insect-like species
23
Book which has different races and could use magic
12
Book I read 10-15 years ago, where the humans of Earth come together with their alien conquerors to face off against a third (alien) species