Who is the character who said he built the time axis in X-Men: The Animated Series?

In S04E11: Beyond Good and Evil Part 4 of X-Men: The Animated Series, there was a guy who said that he built the time axis. What is his name? I couldn't find any info about him. 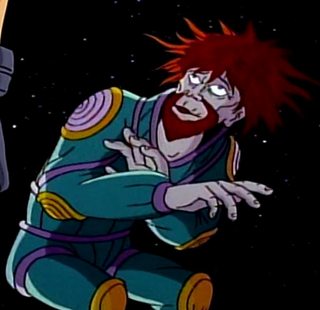 He's Bender, a guardian of time, though

at the end of the episode he's revealed to be Immortus, a time-manipulating villain.

(warning: other spoilers ahead, but I don't think this answer should be an all-hidden one.)

Long story short, Kang the Conqueror is a guy from the 30th century who came across a time-travelling technology. He went back in time to the pharaohs, presented himself as one and tried to make friends with En Sabah Nur (aka Apocalypse, aka most OP'ed mutant ever. Of all time). Now for the fun part: depending on which comic you're reading, Immortus is either Kang himself or an alternate version of him (as comics go...).

Powers: technically speaking, he doesn't have powers, but he's both a physics and strategy genius. Also, he's got a lot of future technology available, granting him what I call "superhuman starter pack": superhuman strength, increased defense, energy blasts, and some other nice things.

Not the answer you're looking for? Browse other questions tagged marvel x-men character-identification cartoon or ask your own question.

24
“My mom once knew a guy who could do that” said Peter to Eric. Do they have any relation?
11
Did Bryan Singer make up the idea that Magneto's helmet blocks telepathy?
12
Does Peter Parker ever cry in the comics, or the animated series?
0
How old was Laura/X-23 when she joined the X-Men and around M-Day?
3
Name of character in the Riftwar series
7
Comic character from the 90s who resembled Spawn
5
Why wasn't Gambit included in the X-Men Cinematic Universe?
0
Can Someone Explain Briar Raleigh and Magneto's Interest in Her?
5
Animated TV series about rich British kid and antagonist with a talking rat