What kind of a ship could Obi-Wan and Luke have purchased for 10,000?

In ANH, Luke is shocked by Han's quote for the cost of passage on the Millenium Falcon to Alderaan.

Ten thousand? We could almost buy our own ship for that!

What kind of a ship (if any) could have been rationally purchased for 10k on Tatooine at this point in time? Is Luke being facetious, or does he really have a point there that he and Obi-Wan might be able to make it on their own, without Han? What kind of a ship would have sold for about 10k on Tatooine around 0 BBY? A 100 year-old decrepit cargo tug with a leaking engine and a surly navicomputer? A nondescrepit, barebones shuttle that can at least complete the Kessel Run, albeit in at least 25 parsecs? A luxury pleasure yacht?

As @Valorum hinted at, I initially misremembered the quote. What I mean by the question is, what kind of ship was in the 10k-ish sort of purchase range?

Luke makes it pretty clear that 10,000 credits wouldn't be enough to buy a ship capable of getting them to Alderaan. It's only almost enough.

“Ten thousand?” Luke gasped. “We could almost buy our own ship for that!”

The Star Wars RPG (Edition 1, 1984) suggests that 10K will get you a chunky down-payment on a crappy used freighter.

You'd also need about a thousand credits for fuel and sundries

How much does it cost to refuel the Millennium Falcon?

The only one I could find was The Broken 'Spanner, a Suwantek Systems TL-1800 freighter, in Stock Ships sourcebook. The used ship cost only 12,600 Cr, but it was most dilapidated.

While it is by no means a superb craft, it at least travels from point A to point B without too much difficulty.

The Broken 'Spanner is a maintenance nightmare. The engine requires readjustment after every hyperspace jump. The astrogation computer system is extremely glitchprone – due to the inherent design flaw and poor maintenance

The port-side cargo pod capture mechanism has corroded so badly that it will not function and must be completely replaced.

The same book states that a new TL-1800 transport cost 41,500 Cr. That said, a ship in poor condition was still worth around a third of the original price. That would make it possible to purchase at least two different kinds of ships for about 10 KCr:

If we can also assume that the price levels in general were lower in the Outer Rim, and on Tatooine, yes, it would have been possible for Luke to buy a simple freighter, but not in decent condition.

According to the canon reference book Star Wars: Absolutely Everything You Need to Know, 10,000 Credits would almost get you a 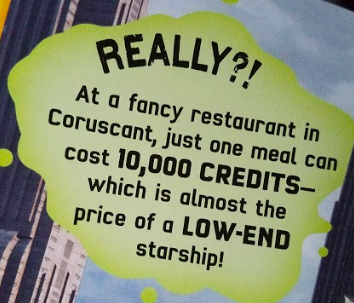 By all accounts, Luke was entirely correct.

Not the answer you're looking for? Browse other questions tagged star-wars star-wars-legends tatooine or ask your own question.

7
How much does it cost to refuel the Millennium Falcon?

11
Was Obi-Wan Subtly Preparing Luke For Training?
18
Why did Luke name his son Ben and not Obi-wan?
13
Why could Luke sense the good in Darth Vader, but Obi-wan could not?
39
How long did Luke know Obi-wan?
33
Why did Obi Wan tell Luke his father wanted him to have his lightsaber?
6
Could Luke have killed Yoda?