This one's a bit of a long shot, because I don't remember many identifiable details, but it's worth a try.

I'm almost certain the book had the word "chameleon" in the title. My copy was a hardcover, I don't know if it came out as a paperback. The cover was black with, I think, a small, colorful picture of a chameleon on it. I bought it used in the late 90's, and I believe it was from the late 80's/early 90's.

The plot is a medical thriller. It takes place in a small, isolated community with a mysterious lab nearby. A group of animal rights activists, including the teen daughter of one of the characters, breaks into the lab and contracts a disease that has been engineered there. This I do remember - the germ is Staphylococcus, with genes added (from a plant?) that causes the organism to excrete hallucinogens. Like regular Staph, it is contagious and a plague of apparent insanity sweeps through the town.

The male main character's female love interest is a teacher or camp counselor, who notices the disease spreading among the town's children first. There's a scene where she tries to talk down a young boy off a roof - his internal monologue makes it clear he has hallucinated turning into a bird, and he throws himself off the roof in an attempt to fly.

There are plot shenanigans surrounding this, including, if I remember correctly, one of the doctors from the lab dealing with shady characters (mobsters? big pharma? I don't recall) and the government trying to keep things hush-hush.

I think the characters figure out what's going on when someone who was already on antibiotics proves resistant to the bacteria.

Perhaps The Chameleon Variant, a 1980 novel by Carol K. Mack and David Ehrenfeld?

Dr. Lieberman, a pediatrician, moves to a bucolic Connecticut town one summer when suddenly an outbreak of bizarre "accidents" begin. Some blame the so-called "crazy sickness" on the heat wave. Dr. Lieberman suspects a virus. As an epidemic of a mind-altering DNA virus takes over the town and contagion grows out of control, he uncovers a well-guarded secret in the local pharmaceutical lab. 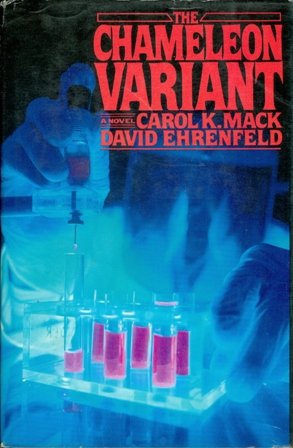