Man on another world, kicked out of colony, tries to survive in jungle

Premise, a colony has been established on a mountain plateau of a jungle planet. (pop maybe 200-500 people) There are ape like creatures living in jungle. The colony is trying to survive on the plateau. (Afraid of the ape creatures, or what else might be in the jungle, so they won't leave plateau.)

The Protagonist (late teens?) is having problems with the colony (I seem to recall the story opens he is barricaded in a hut looking out window with weapons and seeing a body (a friend? family member?) lying dead near the hut. Maybe they were agitating for more exploration of jungle and leaders did not want that, tried to arrest them and killed the other person in the struggle. [Or maybe it was one of the colony police who he killed when they tried to attack him?]

Eventually they agree to expelling him from the colony. And a young woman goes with him in exile. I recall she was always limping, pretty sure it was not from an accident while in exile. (I think she had a genetic problem with her one leg. (too short, twisted, club foot, something like that) so her status in the colony was very low. He was near-sighted, everything beyond about 50 feet was a blur. [Possibly they both were scheduled for sterilization so they would not pass their bad genes?]

So they go exploring and eventually meet the ape-like aliens. I think they eventually can communicate by sign language mimicry.

After awhile they get to the alien village, which had a large open monkey bar/jungle gym structure made of logs, with many levels. I think to stay in the village he had to defeat someone on the structure (knock them off, where they would certainly die in the fall).

The cover may have had a picture of this structure.

Googled "Ace Double Jungle Planet" images and found the cover among all the other covers. :)

The Book is "The Tree Lord of Imeten" by Tom Purdom (the other half was "Empire Star" by Samuel R. Delany) 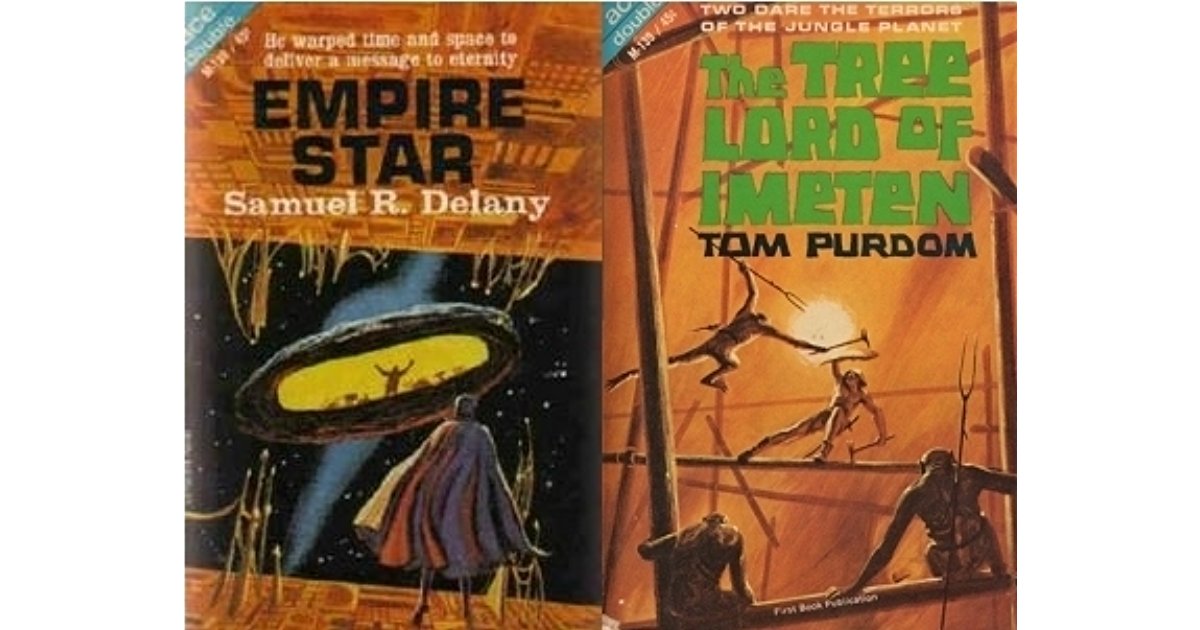 From a review on rrhorton.blogspot.com:

Harold is a 21 year old man living in a colony of refugees from a regimented 21st Century Earth. The colony has been established on a plateau on a planet of Delta Pavonis, on a world otherwise dominated by forest, mountain, and ocean. His mother and sister are long dead, and his father and his best friend have just been murdered in some never specified political dispute. A young woman, Joanne, negotiates a deal whereby the two are exiled off the plateau, but not killed.

In the forest they encounter two separate intelligent species -- a ground-dwelling species without hands (just paws) but great linguistic facility; and a tree-dwelling apelike species which has just entered on an Iron Age. The tree-dwellers are violent, and they have enslaved many members of the ground dwelling species. Harold and Joanne are captured by the tree-dwellers, and, sickened by the slaveholding, they scheme to escape and work to free the slaves.

All fairly routine, really, but it's redeemed by a pretty decent job of portraying the two species, particularly the ground-dwellers, and by the fairly well-characterized main characters. Minor effective details are Harold's extreme nearsightedness and Joanne's limp.

Not the answer you're looking for? Browse other questions tagged story-identification novel planets or ask your own question.

14
Science fiction book with low-tech humans eating other sentient species
9
Looking for fantasy book about a boy who meets a tribal girl who turns out to be a shifter
11
Looking for a novel involving space marines on a primitive alien world
20
Malevolent and Cruel Sentient Earth
17
Sci-fi book where a mutated insect's bite in space colony grants superpowers
14
90s (or earlier) novel: on a cut off colony after FTL travel wipes out life and becomes impossible, an emissary woman starts a college
9
Jungle film where a new humanoid species is discovered and studied. The creatures are eventually eaten by some of the humans
5
Colonists on Mars who hunt each other, one operates an old spaceship and gets back to Earth
6
DOS Go/Othello/Reversi clone with creatures/monsters like Snowmen instead of stones