Is Picard actually fluent in French?

Let me throw out a few examples and potential evidence either way:

Alas, this only really shows a working knowledge of French (tourist-level), especially since he sort of just parrots Minuet's line back to her and then switches back to English Federation Basic.

We also have "Code of Honor", where Data refers to French as "an obscure language called French", which suggests that some people may not even know what French is. (!)

On the other hand, we certainly get the impression from "Family" that Robert and Jean-Luc Picard's parents were rather traditional.

Plus, we are led to believe that in the future, we have advanced to point that people have such good learning and retention, that if Picard decided to sit down with a book on French grammar and a dictionary in his spare time for a couple weeks, he would suddenly be fluent. And this seems like the sort of thing that Picard would consider important to do.

Is Jean-Luc Picard fluent in French or not?

Picard speaks fluent French. Not only was he born and raised in France but we see him speaking French confidently with a French accent, swearing in French under his breath and singing French songs on multiple occasions.

In the pilot episode for Star Trek: Picard, he spends a considerable amount of time speaking in French to his dog.

[Translation: I know you think you're bringing that into the house, but it's out of the question. Don't pretend you don't speak French. We've practiced.]

In TNG, the longest instance of Picard speaking (what appears to be fluent) French is from TNG: 11001001

MINUET: Aren’t you going to introduce me?

Notably, he recognises her accent as being "Parisian" rather than just "French" which suggests a reasonable degree of experience of French regional accents, presumably as a result of his having been born and raised in Labarre, France.

He uses a little bit of French in TNG: Elementary, Dear Data

(and again in TNG: The Last Outpost).

In TNG: Chain of Command, Part II he states that his family would sing songs in French each week.

MADRED: Wake up. Where were you?

PICARD: At home. Sunday dinner. We would all sing afterward.

He sings Auprès de ma blonde with his brother in TNG: Family

Moving down the canon scale, in the EU novel A Time to be Born, Picard’s mother carries on a conversation in French with a teenaged Jean-Luc at home. It’s not clear what language he’s speaking since the conversation is translated for the reader, but he definitely understands her.

“Here, Jean-Luc, eat your lunch,” said a feminine voice speaking French.
He whirled around to see his mother carrying a tray of food into the room; she set it on his desk and smiled at him. He glared at the wall where the picture window had been in the cabin, because he assumed they were watching him. “I know that’s not my mother.”

The novel What Lay Beyond confidently states that French is his mother tongue:

“May I help you, Captain Picard?”

Startled, the captain looked at the interface and saw its expression had not changed. The words were in French, his native tongue.

“Yes, you may,” he said in the same language. “How do I disengage the gateways?”

The novelisation for Generations states that his conversation with his wife and children in the Nexus is in French (with the proviso that this is a weird alternate dimension where weird things happen).

“Go on....” A soft voice at his elbow took him aback. He whirled, and saw his gentle captor—golden-haired, straight, slender—smiling at him with the same indulgent love in her green eyes.

He had never met her; yet he knew that this beautiful creature was Elise, his wife of the past sixteen years. And she had spoken to him in French.

I would presume that Jean-Luc Picard is fluent in French. It is possible that his French is a bit rusty from lack of use. If, as suggested, Data's comment of French being an obscure language implies it is rarely used, Capt. Picard may have limited opportunities to keep his French polished. I credit him with French fluency based on the comment Chain of Command, Part II "At home. Sunday dinner. We would all sing afterward." If he was dreaming, and singing in French, as a result of being raised with French as the language of the household, it will be his native tongue, and the one he's most fluent in, even if he learns many others, including in childhood. If, as is possible even now, he was raised with French in-home and Federation Basic for school and all outside interactions, then he'd be a native bilingual, equally fluent in both languages.

It is not fair to judge the character's language skill, or fluency, by that of the writers, and the audience. The writers may choose to use French, but they're going to want what they use to be useful to the plot and story/character development, and fit with what the general audience will still grasp without having to run to Google for a translation of the show. Naturally the foreign language used in a show is going to be simple or tourist-level, otherwise the audience is going to need open captions for the foreign phases.

A big problem with trying to prove this is the Universal Translator.

There are several episodes where they have to "tune in" to a language to turn it from "incomprehensible Alienese" to "normal English" - it is entirely possible that Captain Picard is frequently speaking French, and everyone else just hears a translation in their own language.

(An excellent example of this is in the DS9 episode where Quark gets his own ship, and travels to Earth with Rom & Nog - the Universal Translator breaks, and none of them speak or understand English)

Data's off hand comment that French is considered obscure shouldn't be given too much weight. Picard was clearly rather irritated by it, as a native speaker would be. Besides who knows what consistutes an obscure language in the 24th century? Only a few hundred million speakers, mostly on Earth? Perhaps Data considers any langage to be obscure if it doesn't dominate at least a half dozen highly populated worlds.

As was noted above, Picard could well be speaking French through the Universal translator most of the time. This isn't contradicted at all by the fact that we occasionally hear a few lines in French; when we see events unfolding aboard a Klingon vessel we usually get the vast majority of dialogue in English and only a few lines of Klingon, but we can safely assume those conversations are occuring entirely in Klingonese.

Furthermore, the universal translator might be the explaination for Picard's British Accent. Perhaps, just as it recognised that the Companion has a fundementally feminine personality and gave it a womans voice, it recognised some thing about Picard's manner ( perhaps he has cultivated a perfect standard Academie Français accent) that tells it that if he were an English speaker, he would speak in R.P. like a classically trained British actor.

Perhaps a more laid-back and easygoing francophone, such as Monsieur La Forge would be assigned an American accent.

He clearly can speak french. He knows (real) french songs. He clearly followed a french education when he was a kid. But his accent is awful...compared to nowadays pronunciation... I had to read the subtitle during his conversation with Minuet...I am Parisian and I did not recognized their accent :o)

Other answers have already established that he speaks french. This answer adds more detail to the question of whether he is continuously speaking french and being translated, or if he is speaking something else.

The fact that we hear him uttering french phrases alone does not discard the possibility of the Universal Translator being active - on many occasions, the translator does not translate certain words, for instance when swearing (possible some kind of Drama Mode).

Star Trek: Picard gives us two more clues to the fact that he is not speaking French continuously. First, he speaks French with his dog in this video:

He even says "Don't pretend you don't speak French. We practiced.", indicating that even in private, around his dog, he usually does not speak French.

Another clue comes from Episode 5, Season 1, where Picard goes undercover and someone has the bright idea to conceal the identity of the famous French Captain Picard, by making him some kind of a french crook with an over-the-top french accent: 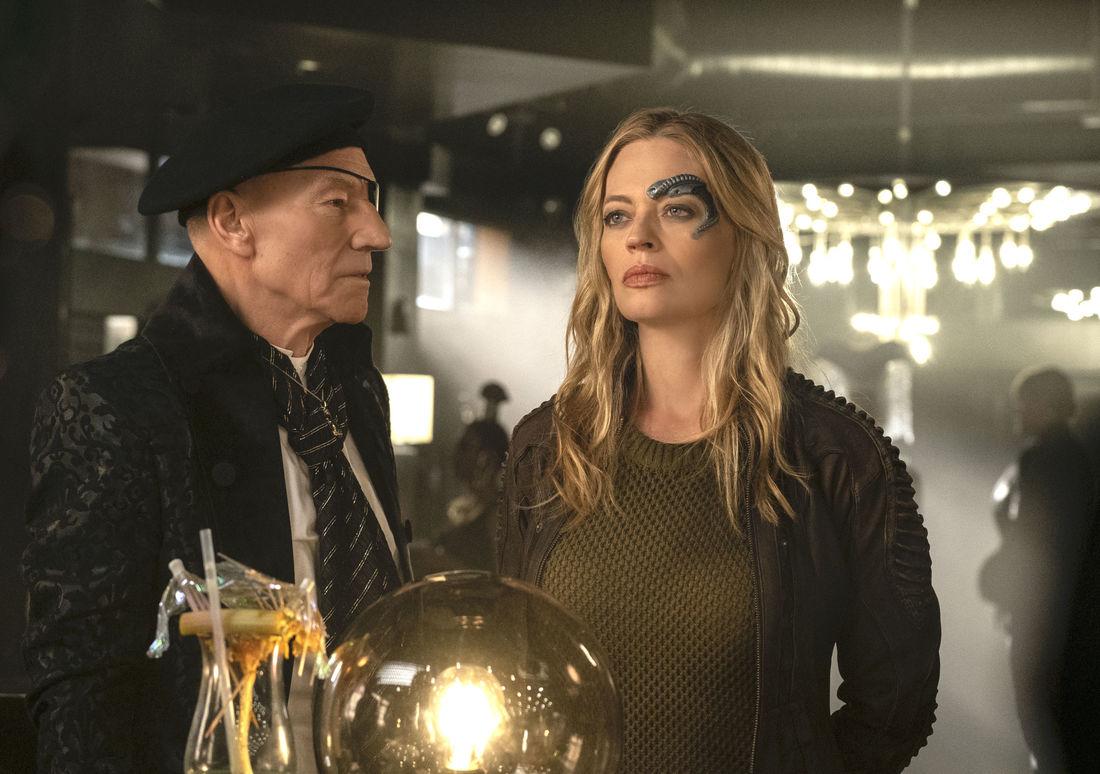 I doubt there is a universal translator setting for "reduce translation quality to give me an accent in the very language I am speaking in", so I assume that he is speaking something other than French with a french accent here.

Not the answer you're looking for? Browse other questions tagged star-trek star-trek-tng languages jean-luc-picard or ask your own question.

62
Was Picard speaking French and being translated the entire time?
18
Why did the producers of Star Trek: TNG choose to characterise the new Captain as French?
7
Why did Data call the French language "obscure"?
15
Why does the Federation insignia have two acronyms?
11
Which species has the greatest population in the Federation?
4
What indications are there that there are other Terran languages in common use in Star Trek?

62
Was Picard speaking French and being translated the entire time?
6
Why was Picard an assistant astrophysics officer?
7
Why did Data call the French language "obscure"?
7
What languages is Data fluent in?
11
When did young Picard actually meet the Nausicaans in the bar?
11
Why does Captain Picard drink tea?
8
Was Captain Picard justified in holding Rasmussen?
4
What indications are there that there are other Terran languages in common use in Star Trek?
3
How tall is Picard?