This was on in the UK in the 80's on Saturday mornings. Specifically around 1984-5

I think there may have been three good characters - one of them a dog?

The baddies were white coloured like storm troopers except they all had Darth Vader shaped helmets and I think the lead baddie had black armour.

I can't remember much else except on one episode to get into the enemy base they knocked on the door and there was an exchange along the lines of:

What do you want?

To take over the base

How many of you are there?

What do you want?

To take over the base

How many of you are there?

...and so on until they had enough to take over the base.

Edit: Thanks to @HorusKol this is the exact scene I remembered

This is Robo Story (aka Myrtille and the Robots) 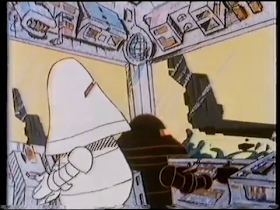 4
Animated series where the main antagonist is the "East Wind"/"Blizzard"
21
Cheesy '80s spoof movie
8
Movie/series about people fighting off a fake human to protect a pregnant woman
7
80s (or earlier) sci fi book, humanoids bossed around by aliens
6
Animated series where people live in the sky
10
Crew of a military command satellite hold out against an attempted coup