This is a novel I read around 5 years ago and I think it was fairly new then. Certainly less than ten years old.

The protagonist is a policeman. I think he is a policeman in New York though I wouldn't swear to that. If not New York it was one of the big US cities. When the book starts he has been a policeman for about a decade but he has no memories older than that. This amnesia is a big part of the plot since it's going to turn out that he is a warrior from a fairy world who was moved to Earth to defend a princess, and his memory was wiped to conceal his identity.

At the beginning of the book he and his female partner are called to a reported break in. They split up and his partner goes up the stairwell. His partner is attacked from behind by a man wielding a sword and - this is a scene that has stayed with me - she is decapitated so cleanly that her detached head stays conscious for a second or so and catches a glimpse of her assailant while her head is falling to the floor.

We learn as the plot develops that a child (possibly infant) princess was moved to Earth to protect her - I forget exactly why. The protagonist was also moved to act as a bodyguard, but having amnesia he doesn't realise this at first. Two assassins have come from the fairy world to kill the princess, and it's one of these assassins who decapitates the protagonists partner.

It's at this point that I stopped reading the book so I don't know how the story turns out, though presumably the cop kills the assassins and saves the princess at great personal cost :-)

I'm sure I have this book somewhere in my collection but I've searched and searched without finding it. If anyone can identify it I would be most grateful! It wasn't written by a famous author. I'm fairly sure I had never heard of the author before.

And courtesy of that nice Mr. Google and this review on the Tor web site I have finally found the book. It is Awakenings by Edward Lazellari. 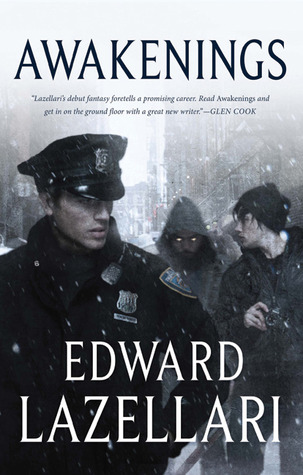 I had remembered the book reasonably accurately. The main protagonist is Callum MacDonnell who is indeed a policeman in the NYPD and does have amnesia. It turns out the spell that transported him from the other world, Aandor, went wrong and wiped his memory.

However it was a prince not a princess transported to Earth for protection, and Callum is not the only defender on Earth. I only read the first few chapters so I don't know exactly what ensues, but there is quite a large cast involved. Apparently the book was the first in a series (something I didn't realise at the time) and there is a sequel The Lost Prince.

The beheading scene that had stayed so vividly in my memory is when Cal's partner Erin Ramos is attacked by one of the assassins seeking to find and kill the prince:

She walked across the hall to the second set of stairs and put her foot on the first step. She heard a creak behind her. Before she could turn, there was a swish, like the sound of a switch whipped through the air. Then silence. Not a drop of rain, not a squeak; someone had pulled the plug on the whole world. She realized she was tumbling forward, only because the floor raced toward her. An odd sensation, like gravity had been turned off. She was floating. The moment slowed (a Hollywood special effect) and her view rotated, like clinging to a ball in flight, past the floor and back to the scene behind her. Her temple bore the weight of the fall, hard—she couldn’t move. A beautiful man with long dark hair and bronzed skin had one arm across his chest, and in his hands he held a gleaming sword parallel with the ground. He was the second-to-last thing she witnessed before everything went dark. The last thing Erin Ramos saw was her headless body falling toward her.

10
SF book where a boy loses an arm, moves from New York to Ireland
10
The Princess Who Lived with Dragons?
3
Recent book trilogy with a princess who had a dragon, and a servant boy
8
Trying to remember a sci fi book title I read in the 80s
5
1990s novel about a man trapped in simulated historic New York
7
Old story about New York City having become "Black New York"
7
Eerie stop-motion short film about a character with amnesia in underground, concrete tunnels