Do Superman and Dr. Occult team up again after Superman Annual #7?

One of my favorite Superman books is Superman Annual #7, where he teams up with Dr. Occult. I enjoyed that team up a lot. Do the two characters meet again in other books?

The character of Dr. Occult, having the distinction of being the DC Universe's first mystery man, had a limited appeal in the previous DCU after the 1960's. He was most well-known appearing with the Sentinels of Magic, a group of magical or magical-using beings who patrolled and protected the DC Earth from magical threats.

Dr. Occult and Superman rarely work together again from that moment in DC Annual #7 and don't seem to meet again until JSA: Black Baptism (May–August 2001) when Dr. Occult saves Superman from a magical bullet.

While there was the release of Justice League Dark, which was supposed to deal with magical menaces to the DCnU, New 52 Earth, Dr. Occult's status is as yet unknown.

Dr. Occult was actually a sort of precursor to Superman. He had the same creators, and for a few issues (More Fun Comics #14-17) he wore a cape and briefs and was able to fly. This was before Superman, so it was kind of like Jerry Siegel and Joe Shuster were trying out the Superman concept in a Dr. Occult story.

In order of publication, I believe the first time Superman and Dr. Occult were shown to meet was in Action Comics Vol 1 #692 (published in 1993).

In this issue, Dr. Occult explained to Superman how exactly he was able to return to life after dying as a result of his battle with Doomsday. Unusually though, it was established that Supes and Dr. Occult had had a prior meeting which hadn't yet seen print. This prior meeting was later shown in Superman Annual Vol 2 #7 (published in 1995), the issue you cited in your question. Judging by Superman's dialogue in Action Comics #692, they apparently had no interactions between these two stories. Note that both of these issues were scripted by the same writer, Roger Stern. 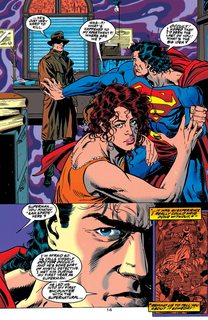 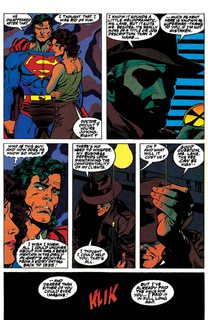 8
Was Superman Romantically Involved With Any Females Without the Initials "L.L."?
15
Is the Golden Superman canon, and what were his exact powers?
5
What exactly is Mongul from (pre-Crisis) Superman comics, and is he stronger than Superman?
12
When is Clark Kent's favorite story revealed?
5
First time(s) other superheroes acknowledge Superman as morally superior to themselves?
27
How did Superman and Spider-Man meet if DC and Marvel heroes don't exist in the same universe?
7
How did Superman get his electrical powers in Superman Blue?
8
Even with his powers, doesn't Superman train and work out?
22
1970s team-up comic in which Superman nonchalantly kills a sentient brain?
15
Has Superman ever turned against humanity and been stopped?