Okay so I remember almost nothing of this show. The only thing I know is that I used to watch this show on Cartoon Network and it had a hero who used a sword to fight monsters and a girl who used bow and arrows. Also, the monsters kind of looked like computer generated and there was a book and stones which were somewhat related to the story?

Could this be the anime version of the Deltora Quest books?

Directed by Mitsuru Hongo (World Trigger, Outlaw Star, Spirit of Wonder), DELTORA QUEST is based on the first Deltora Quest series written by Australian author Emily Rodda. Deltora Quest follows the journeys of Lief, the son of a humble blacksmith, who sets out to fulfill his father’s quest to restore the Belt of Deltora.

In this epic quest to save Deltora from the evil grips of the Shadow Lord, Lief is joined by ex-palace guard Barda and Jasmine, a wild girl from the Forests of Silence. Their quest is to find the seven gems of the Belt of Deltora: the topaz, ruby, opal, lapis lazuli, emerald, amethyst, and the diamond. Each gem has a special power hidden in ominous locations around Deltora, and in order to find these gems, the three friends must face numerous obstacles and perils.

Their adventure is no easy task — the trio must form crucial allies; slay monsters; and tackle obstacles filled with twists, betrayal, and word games in order to survive. Once the Belt is complete and the proper descendant of the first King of Deltora, Adin, wears the belt, the evil tyranny of the Shadow Lord will be forced back to the Shadowlands. For a children’s literature series, this is a true fantasy series complete with demons, magic and dragons, and it is (without a doubt) one of the best children’s fantasy series out there.

There's a guy with a sword, a girl with a bow, magic gems that are part of the plot, and some of the monsters were rendered with CGI. 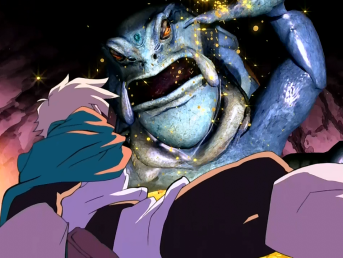 Here are the opening credits, which also feature a book:

7
Anime/show about elemental gems and knights?
11
A cartoon/anime with a blonde-haired boy with blue eyes and his father(?), they're looking for 7 gems/diamonds
5
Medieval cartoon with blonde prince wearing blue, searching for 7 magical gems with a knight
4
Book about three companions forced to solve puzzles to find gems

7
Cartoon series with teens and adults summoning monsters, involved five temples in Atlantis
6
Cartoon - boy traps monsters into balls on a magical bracelet
7
Cartoon TV Show About Three Kids and Monsters and a “veil” between realms
5
Cartoon in which a boy and girl travel with a robot
6
Kids TV show combining live action and animation, kids fighting monsters after entering a photo booth
5
Old cartoon where villain turns villagers into statues
3
Cartoon show in which two college students fought monsters