Where did the Red Brick Road lead to? 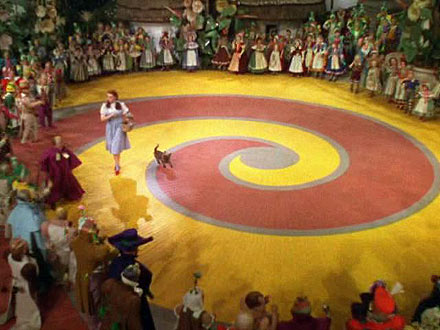 In the 1939 film, a red brick road can be seen starting at the same point as the Yellow Brick Road but going in a different direction. This road does not exist in the books.

In the original series of Oz books written by L. Frank Baum the red brick road goes to the Quadling Country in Oz. Red is the Quadlings' state color.

In his books, the Land of Oz was divided into four quadrants and each was designated a particular color: Winkie Country = Yellow, Gillikin Country = Purple, Munchkin Country = Blue, and Quadling Country = Red. Glinda the Good was the ruler of the Quadlings in L. Frank Baum's Oz series. As her bubble floats away from Munchkinland in the 1939 film, it appears to be following the red brick road. Therefore, the red brick road most likely leads back to her homeland, Quadling Country. 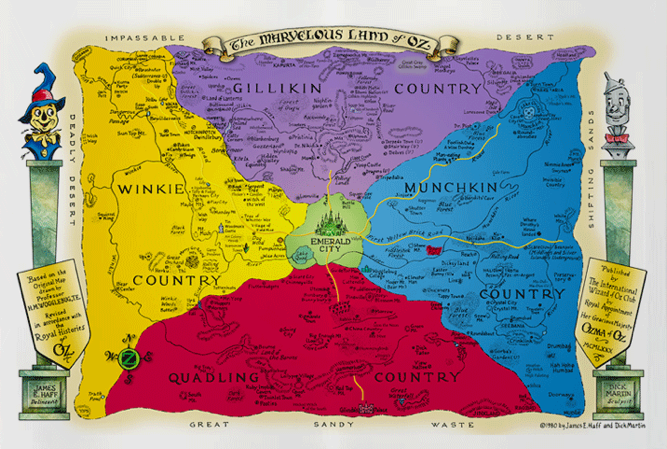 I'm inclined to go with the answer from Askville, since it may simply mean that the road wasn't in the Munchkin town in the books. (I haven't read any of them)

Thanks to Pixel's link, I also did some searching through the books. Not only is he and Wikipedia right in that a "red brick" road is never mentioned, there is a passage that specifically suggests that the road is not red - from The Patchwork Girl of Oz, 84% down the webpage (near the beginning of chapter 25, bolding mine):

Not that the trees and grasses were red, but the fences and houses were painted that color and all the wild-flowers that bloomed by the wayside had red blossoms. This part of the Quadling Country seemed peaceful and prosperous, if rather lonely, and the road was now more distinct and easier to follow.

The map above does appear to be correct, however. The Quadling country is, in general, associated with the color red, and is located in the South. So I feel it's pretty likely that the movie made some slight alterations, such that the yellow brick roads all eventually led to the Winkie country (and from Munchkin country, meant you'd go right through the Emerald City), and the red brick road to the Quadling country. If the movie encompassed more, a purple brick road and a blue brick road may have been added as well.

As you can see from this photo, the red "road" leads directly alongside the bushes by the bridge over the Munchkin river and then simply stops dead. There appears to be a cutting where a road could go, but the road itself ends in a bush. 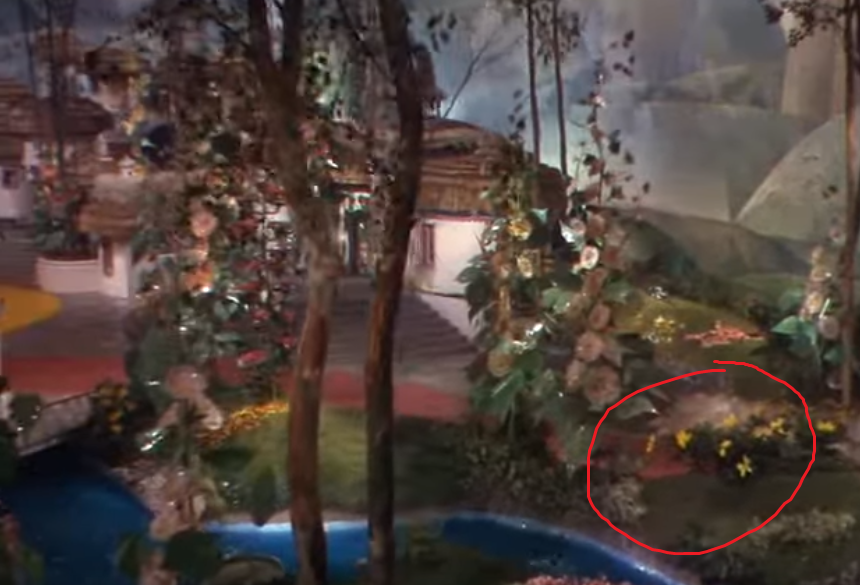 I went back and re-watched the movie scene, and read that passage in the novel, before making this an answer but I'm now pretty convinced that there is no red brick road. It seems like there's a road because of the way the yellow brick road is laid out on the set.

As mentioned in other answers, there's no red brick road in the original novel. In the movie, we can see a sort of double-spiral of red and yellow bricks starting from a central location and moving out.

If you watch the scene at the part where Dorothy hits the "main part" of the road, the red bricks veer off screen-right (to Dorothy's left) in an arc that appears to simply be the edge of the circular pavilion. In particular, it looks to me like the red part is getting thinner as the last loop of yellow nears the edge of the pavilion. It's hard to tell because there's some kind of stone structure in the way, but there isn't any on-screen indication that the red bricks "go" anywhere. 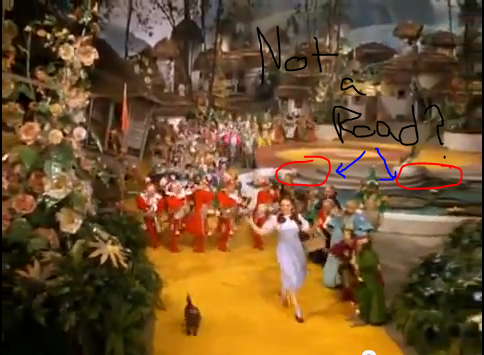 It has been years since I read The Wonderful Wizard of Oz (from my grandmother's book case). I vaguely seem to remember that the book suggested that from Munchkin Land there were THREE roads from where Dorothy left on her adventure: the Yellow, the Red, and the Purple.

I have also read somewhere the roads were colored so that the Munchkins knew their directions, inferring they were not totally compass wise. Another reference seems to suggest that the Four Roads of Oz also met up at the center of The Emerald city as well - which infers that there had to have been four main doors to the city.

The Core Rulebook for the RPG "Oz Dark and Terrible" is a compilation of all of the facts from Baum's books with the exception of Dorothy's arrival into Oz(due to the fact that her arrival was such a huge catalyst for change). In the back of the book it has a map of all of Oz and it make no mention of a red brick road, but instead shows not one but five yellow brick roads throughout Oz.

KerryKerry
7
2
Add a comment  |
Highly active question. Earn 10 reputation (not counting the association bonus) in order to answer this question. The reputation requirement helps protect this question from spam and non-answer activity.

21
What powers did the ruby red slippers have?
10
Why didn't Disney use one of the Wicked Witch of the West's many pre-existing names?
7
Are there any references about the magical red/silver shoes in Oz the Great and Powerful?
13
Do the Oz movies come from a greater canon?
9
How did Dorothy and the Scarecrow decide on which way to go?
55
Does the Wicked Witch of the West know she can be killed by water?
5
In "The Wonderful Wizard of Oz," why does the Good Witch of the North advise Dorothy to go to the Emerald City?
17
Who built the yellow brick road?
16
What is this Oz book where the Yellow Brick Road was sabotaged?