What are the melting and boiling points of adamantium and vibranium? Is this ever stated in the comics?

The answer to this question perhaps has implications on some inconsistencies in the comics, but perhaps I am naĂŻve. If the melting point is too high for these metals, how are they ever forged into weapons/shields or bonded to Wolverine's skeleton? And how are the tubes and instruments used to mold weapons and bond the metal not melting in the process? If the melting point is too low, then how are they so durable and strong? How are Wolverine and his adamantium skeleton able to endure a nuclear explosion from Nitro?

One workaround is that these metals are vibrated rather than melted, such as using Antarctic vibranium or using the technology in Shuri's vibranium mines from the Black Panther movie. But I don't think this would explain the process of binding adamantium to Wolverine's skeleton.

According to the Official Handbook of the Marvel Universe, vibranium melts at 5,475Â°F. 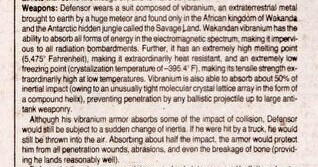 Weapons: Defensor wears a suit composed of vibranium; an extraterrestrial metal brought to earth by a huge meteor and found only in the African kingdom of Wakanda and the Antarctic hidden jungle called the Savage Land. Wakandan vibranium has the ability to absorb all forms of energy in the electromagnetic spectrum, making it impervious to all radiation bombardments. Further, it has an extremely high melting point (5,475Â° Fahrenheit), making it extremely heat resistant, and an extremely low freezing point (crystallisation temperature of -395.4Â° F), making its tensile strength extraordinarily high at low temperatures. Vibranium is also able to absorb about 50% of inertial Impact (owing to an unusually tight molecular crystal lattice array in the form of a compound helix), preventing penetration by any ballistic projectile up to large anti-tank weaponry.

As found by @Valorum in the comments adamantium can be worked for a short period of time if it's kept above 1,500Â° Fahrenheit as stated in the Official Handbook of the Marvel Universe Vol 2. However, it also states it cannot be rearranged once it has solidified again implying that it has a one time melting point of 1,500Â° F. 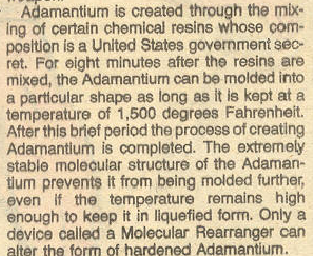 Adamantium is created through the mixing of certain chemical resins whose composition is a United States government secret. For eight minutes after the resins are mixed, the Adamantium can be molded into a particular shape as long as it is kept at a temperature of 1,500 degrees Fahrenheit. After this brief period the process of creating Adamantium is completed. The extremely stable molecular structure of the Adamantium prevents it from being molded further, even if the temperature remains high enough to keep it in liquefied form. Only a device called a Molecular Rearranger can alter the form of hardened Adamantium.

Not the answer you're looking for? Browse other questions tagged marvel adamantium vibranium or ask your own question.

46
Out of two organic lumps of Wolverine, what decides which one would regenerate to full Wolverine?
5
What is the source and distribution of Wakanda type of Vibranium?
27
How could this Adamantium piece be destroyed in The Wolverine?
5
What was the unknown catalyst which allowed Proto-Adamantium to exist?
3
Are the ages of the original five X-Men ever stated?
12
Has Ant-Man ever penetrated vibranium or adamantium?
8
Are the adamantium rules from previous Wolverine movies now not canon after "Logan"?
8
Vulnerability of Adamantium and Vibranium to magic
31
Has the Hulk ever refused to do this in comics?
7
Do adamantium or vibranium smell; and if so, what do they smell like?