From my earliest watching of Star Wars, I remember distinctly that Ben Kenobi's home on Tatooine wasn't a Tunisian domed house that we know from the movie, but a cave cut out of the rock itself.

The establishing shot was one of the Petra caves, looking something like this 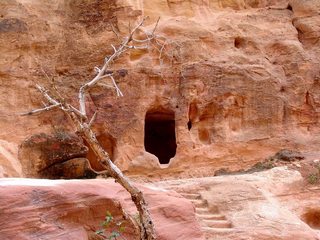 After decades of talking to people and being greeted by blank stares, I casually brought it up to a guy who remembered the same thing.

Given the n^2 versions of Star Wars out there, was there a version of a New Hope that had this alternate "Kenobi's Home" or is this a bizarre and rare shared halucination?

It is a well known fact that editing saved "New Hope" from being a very poor movie, maybe even worse then "Last Jedi" :D Unfortunately some things had to be cut, so we have a story with very sharp transitions in some parts, and Kenobi's house is one of them.

First, there is a part where old Ben saves Luke from Sand People in front of some caves. We were never shown how Kenobi got there, implying that he lives near by. 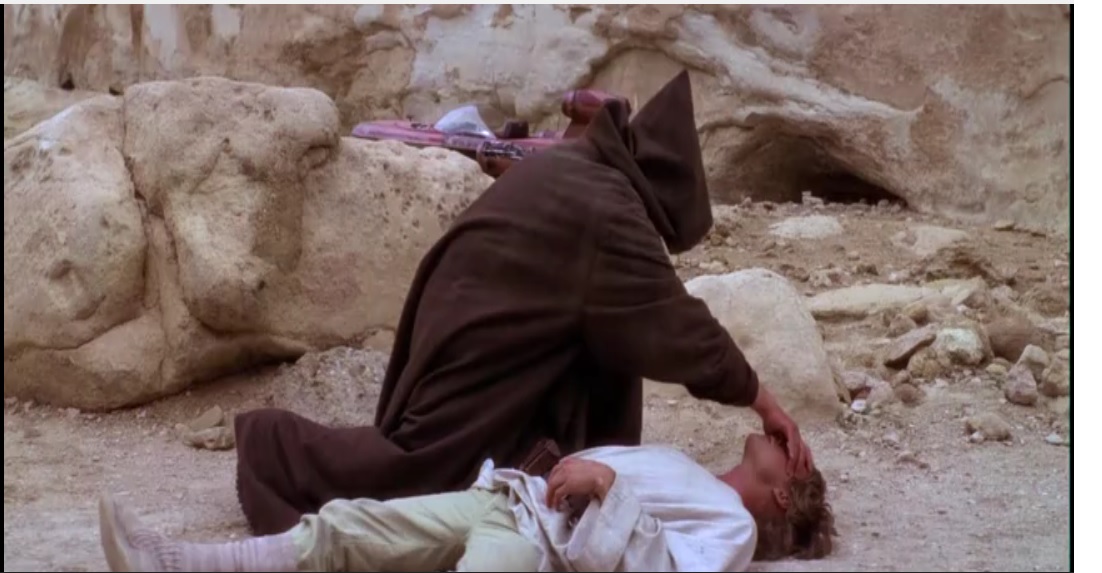 Next we have brief look at Kenobi's house. Unfortunately this is sudden, the trip to it is never shown, and after that we have an indoor scene - a very important one where Kenobi talks about the Jedi and Luke's father, Leia appears in a message, Luke mulls should he go with Kenobi or return home ... Therefore, people tend to forget this shot: 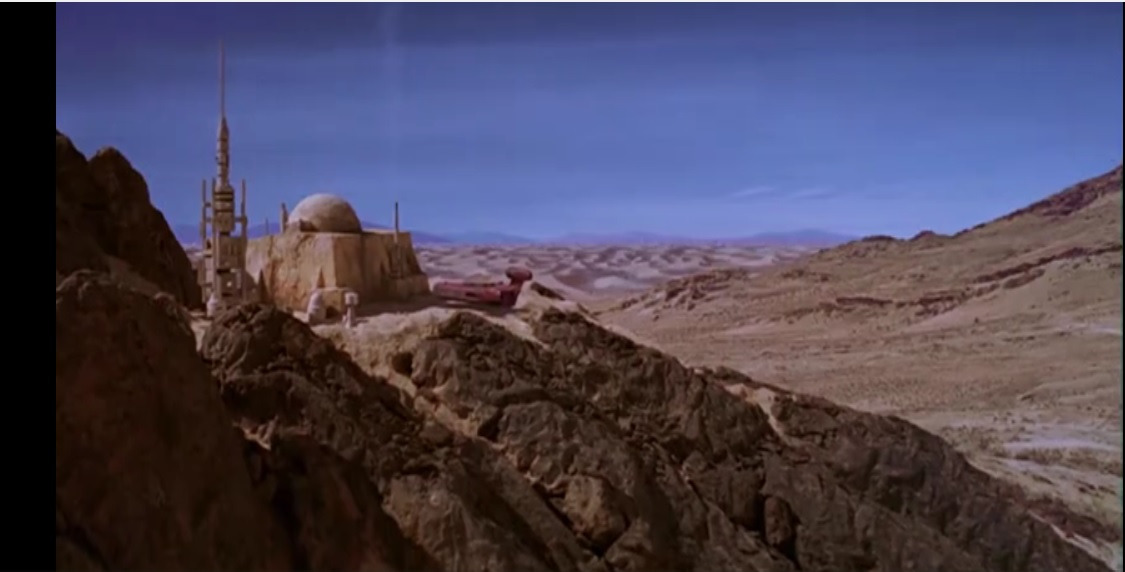 Also note that the walls in Kenobi's house are very rough, so it's hard to discern if this a house or a modified cave. 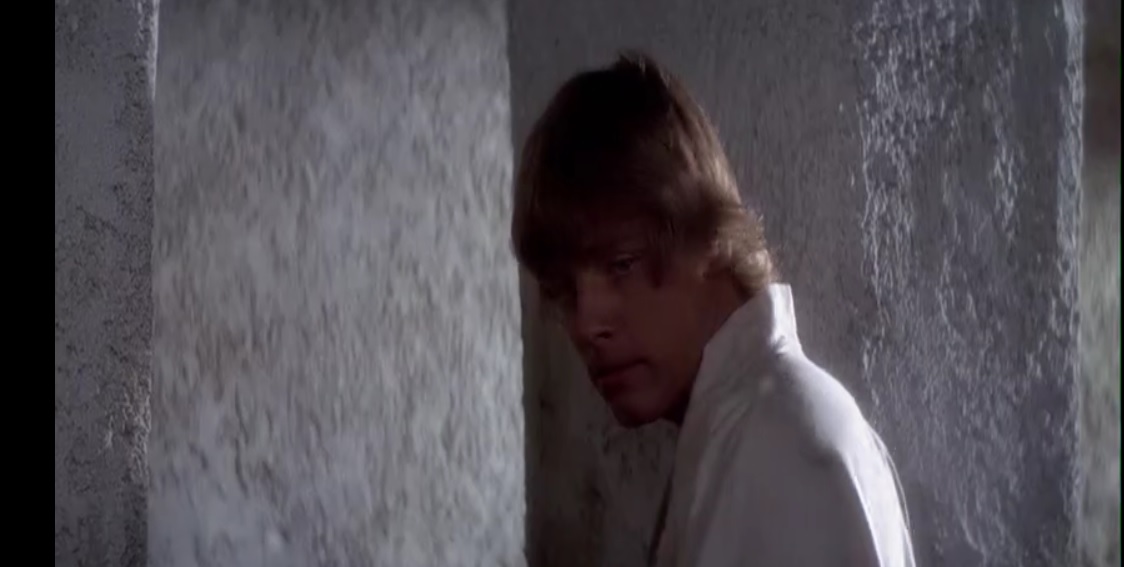 Luke makes the decision he is not coming with Kenobi. Movie cuts to Imperials and after that comes a scene where Luke and Kenobi discover dead Jawas. Again, it is never shown how did they get there, subconsciously implying that Obi-Wan and Luke didn't go far. Scenery in this scene resembles the scenery in the first scene (Sand People attack and rescue). So a casual viewer would conclude that after Kenobi saved Luke they simply hid in one of the caves (Kenobi's home) and after a while they emerged only to find the Jawas attacked and killed. 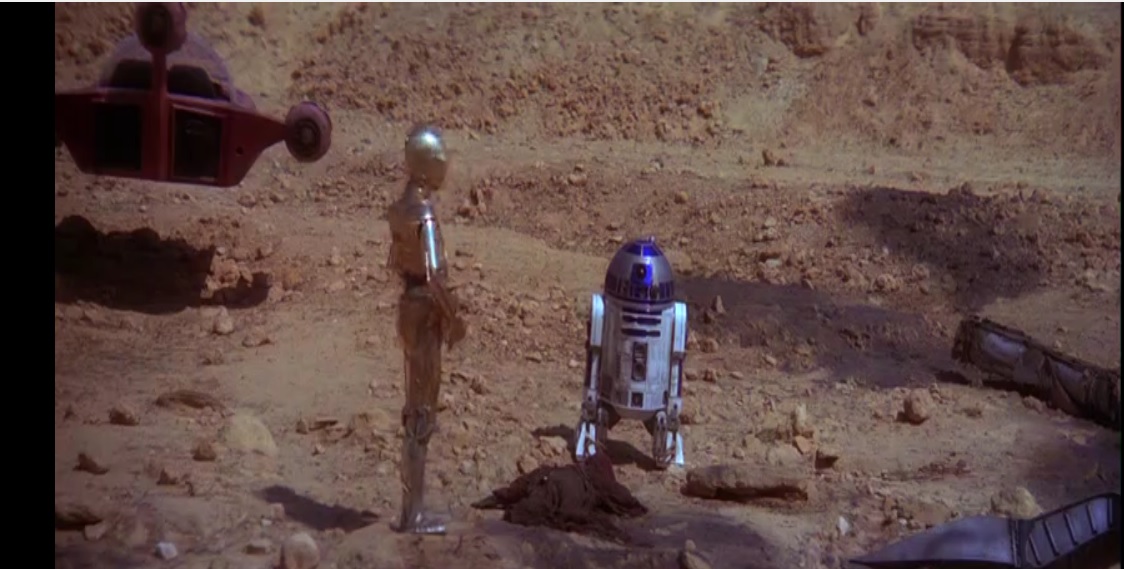 After the first time I saw Star Wars (on an early print that did not say "A New Hope"), I thought I remembered the scene where they watch Leia's message taking place in a cave. However, when I saw the movie again, a few years later, I realized that I have gotten the video message scene confabulated with the events in the desert after Luke gets knocked out by the Sand People, and R2-D2 is watching from a hollow in the nearby rocks.

My best guess is that you had the same kind of confusion.

Could you be getting confused with the cave that Luke uses to make his lightsaber in this (pretty famous) deleted scene from Return of the Jedi? 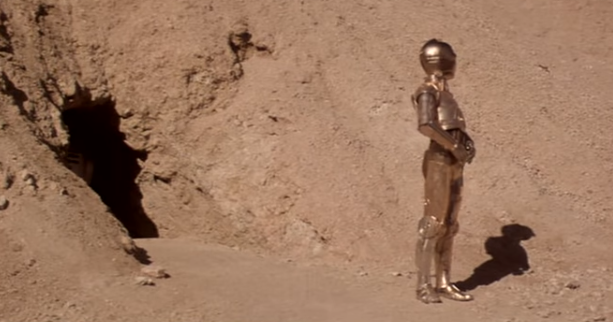 It's possible this was conflation with one of the official sources that identified Obi-Wan's home as a cave.

From the third draft of the script:

The clean but spartan cave dwelling radiates an air of time worn comfort and security. The image of the beautiful rebel princess is projected from Artoo’s face.

This made it into the official novelization published in 1976:

The decor of Ben Kenobi’s well-concealed cave was Spartan without appearing uncomfortable. It would not have suited most people, reflecting as it did its owner’s peculiarly eclectic tastes. The living area radiated an aura of lean comfort with more importance attached to mental comforts than those of the awkward human body.

Much later, in 2004, Ben lived in a cave in the Khonin Mountain Range in an ambiguously Legends-canon Star Wars Tales comic, Luke Skywalker: Detective: 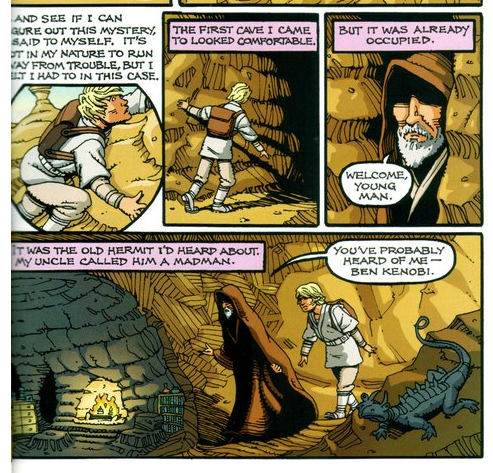 More recently, the Disney+ series Obi-Wan Kenobi established in canon that at one point during his exile, Obi-Wan did live in a cave:

While this was released after this question was posted, it does show that the idea of Ben living in a cave was available to the show writers.

4
What Star Wars footage shot for one film was reused in a later film?

102
Why do we hear Leia's Theme during Kenobi's death?
24
Was Leia supposed to enlist Obi-Wan Kenobi's help anyway?
13
Are there other very common non-invented English names in the Star Wars films other than Ben, Luke and Owen?
39
Why did Luke leave Owen and Beru's remains?
43
What are those two silvery objects resting on Ben Kenobi's table when R2-D2 plays Princess Leia's message?
10
What else was inside Ben Kenobi's chest?