Many years ago, > 20, I read a story about a man who lost his wife and kids in some event. In his grief he developed a virus or bacteria that would cause women to age rapidly and die, effectively making the whole world suffer as he did. The story follows a few characters as they work to deal with the pandemic and search for a cure. I remember that the disease was spread by placing the infectious material on money. In the end societal norms had to change to deal with the lack of women.

I believe I have the main plot elements described. I would love to read the story again, especially in relation to changes to current norms and the advent of CRISPR gene manipulation, but I cannot find it. Any thoughts as to the author or title would be appreciated.

This is The White Plague by Frank Herbert.

When an IRA terrorist car bomb explodes, the wife and children of molecular biologist John Roe O'Neill are indiscriminately killed on May 20, 1996. Driven halfway insane by loss, his mind fragments into several personalities that carry out his plan for him. He plans a gendercidal revenge and creates a plague that kills only women, but for which men are the carriers. O'Neill then releases it in Ireland (for supporting the terrorists), England (for oppressing the Irish and giving them a cause), and Libya (for training said terrorists); he demands that the governments of the world send all citizens of those countries back to their countries, and that they quarantine those countries and let the plague run its course, so they will lose what he has lost; if they do not, he has more plagues to release.

‚ÄúWhat does he see around him that gives him this knowledge?‚Äù Hupp asked. ‚ÄúHow does he assure himself his method or methods will work?‚Äù
‚ÄúWhat if he could contaminate paper?‚Äù Foss asked.
Beckett moved his lips soundlessly, an unspoken word. He repeated it aloud: ‚ÄúMoney!‚Äù He looked up to find himself the focus of five pairs of staring eyes. Hupp exhaled a long ‚ÄúAhhhhhhhhhh.‚Äù
‚ÄúThrough the mails?‚Äù Danzas asked.
‚ÄúWould that not contaminate everyone who handled such mail?‚Äù Lepikov asked.

and that the "plague" causes premature aging

‚ÄúI‚Äôve read the Canadian report,‚Äù Stonar said.
But did you understand it? Beckett wondered. He said: ‚ÄúGood. Then you‚Äôll follow that we believe this plague causes a kind of premature aging, very swift, no time for many of the usual side manifestations. I call your attention to the white blotches on the extremities. Very suggestive.‚Äù
‚ÄúGenes to control aging?‚Äù Stonar asked, a sudden intense curiosity in his voice. 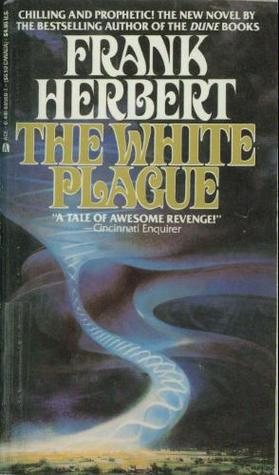