Has the Atom ever gone atomic?

In the DC universe, the character of the Atom (at least in his later instances) has the ability to shrink and grow, similar to Marvel's Ant-Man. In the MCU film Ant-Man, the titular character shrinks so much that he enters the Quantum Realm, a sub-atomic realm that one should not go to. This means that Ant-Man, in some form or another, has shrunk to at least the size of an atom. Has the Atom performed this feat? I mean, being named the Atom, has he ever shrunk to the size of his namesake?

Ray Palmer was the first incarnation of The Atom with shrinking powers. As you can see from this page from Superman #302, August 1976, Ray used to routinely travel by calling someone at his target location, shrinking himself down to the (subatomic) size of an electron, and hitching a ride on an electron to his destination. 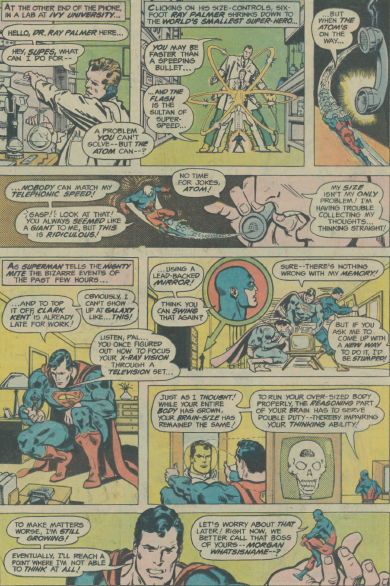 In DC Rebirth, Ray Palmer goes below subatomic into the Microverse.

Subsequently, in the DC Rebirth reboot, on Earth-0, Ray Palmer is by day, a professor at an Ivy League college , and by night, the experienced crime fighter The Atom. He reveals his secret identity to his friend and apprentice Ryan Choi, and enlists him for tech support during his adventures. After many adventures together, Ray disappears and Ryan is scolded when Ray cancels classes for the fifth day in a row. When Ryan goes to get Ray from his workshop where he has seemingly been confined for a week, he instead finds a video recording from Ray. In it he reveals he discovered a universe beyond the subatomic, a so-called Microverse while investigating a disruption in space and time, and within he found something that posed an existential threat to their universe. He asks Ryan, the only other person who knows how to use the Atom's technology and whom Ray trusts, to go into it, rescue him, and finish his work. Ray informs Ryan that upon arrival he will also meet with someone who he himself has encountered. He tries to warn Ryan about something, but the footage cuts out abruptly before he can finish. When Batman begins recruiting for his new Justice League of America, he chooses Ray as one the members of the new league, however when he enters Ray's office he finds Ryan instead. Ryan explains to Batman about Ray's situation so he takes Ryan as Ray's successor.

11
Does Ray Palmer from Arrow become Atom?
2
Does the Flash ever meet his younger self in the TV show, after having gone back in time?
5
What are the artifacts in the Waverider timeship?
5
Has Per Degaton appeared in any of the current DC comics adaptations?
1
Why are the Time Masters the villains?
0
Why didn't Rip Hunter recruit The Flash and Green Arrow on the team?
15
Has Batman ever gone mad and had to be stopped?
5
What exactly is the job of the Time Masters and how do they do it?
14
Has Wonder Woman ever gone rogue?