Who is this Starfleet crewman and why is he wearing an old uniform?

In DS9 episode "Tears of the Prophets" (S06:E26), Sisko is holding a conference where he attempts to convince the Romulans to help invade Cardassia. In the background is a guy in a TNG-style Starfleet uniform with no pips on his collar. This presumably makes him a crewman, although there may be pips that aren't visible. Of greater interest, however, is that he's wearing an old uniform that had been phased out by this time. The TNG-style uniform had been out of use for at least two years at this point in the Dominion War, possibly even longer.

Who is this character and why is he wearing the old-style uniform?

From the episode "Homefront" we saw a bunch of officers stationed on/near Earth in the TNG-style uniforms, even after Voyager had departed with only black jumpsuits available.

And of course there was all that uniform juggling in Generations. Even Admiral Ross' first appearance had the old TNG-style uniform 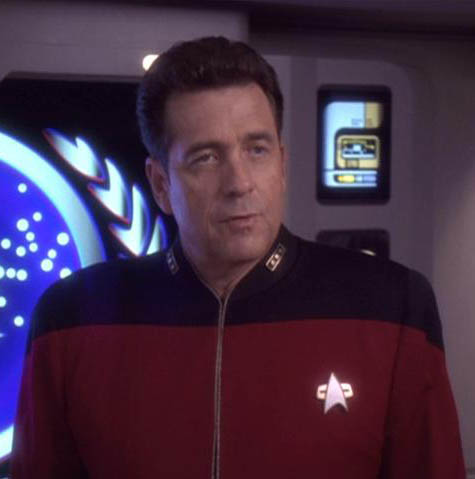 That was chronologically months later than Admiral Hayes wearing a weird hybrid uniform in "First Contact." (If you look closely you'll see the stripes of stitching.) 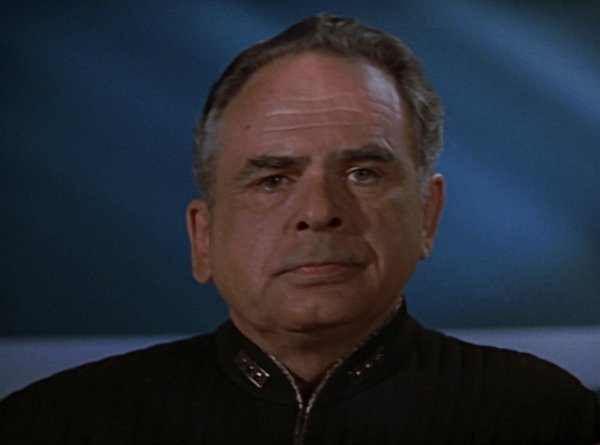 So the best in-universe explanation is that there was a very long tail of uniform migration, that waited longest for "desk" officers, such as admirals, their attachés (remember Dexter Remmick?), and perhaps assignments related to the Federation diplomatic corps.

The grey uniform was issued during War time. It was designed to make it harder to distinguish the wearers department, rank and make it harder for them to be targeted.

It would make sense you'd issue to your frontline line personnel first, and work your way back.

By the time Picard comes around, SF have moved back to the shoulder departmental design.

Not the answer you're looking for? Browse other questions tagged star-trek star-trek-ds9 character-identification or ask your own question.

61
Why did Deanna Troi keep wearing a Starfleet uniform after Chain of Command?
25
Did Sisko violate Starfleet regulations or Federation laws when he fired a torpedo to devastate a planet's atmosphere & force it's occupants to flee?
14
Is Sisko referring to the events of First Contact here and if so how does it affect things?
6
How did the Klingon war that Sisko refers to spread Starfleet thin?
16
Why were DS9's uniforms different?
50
Why does Captain Kirk wear green in the DS9 episode Trials and Tribble-ations?
36
Why doesn't Seven of Nine wear a Starfleet uniform?
11
Why was T'Pol exempted from Starfleet uniform protocol?
12
Why did Starfleet not attempt to make contact with the Prophets?