Why can Bubbles blush?

This is a question about this comic strip, and others, from Questionable Content. 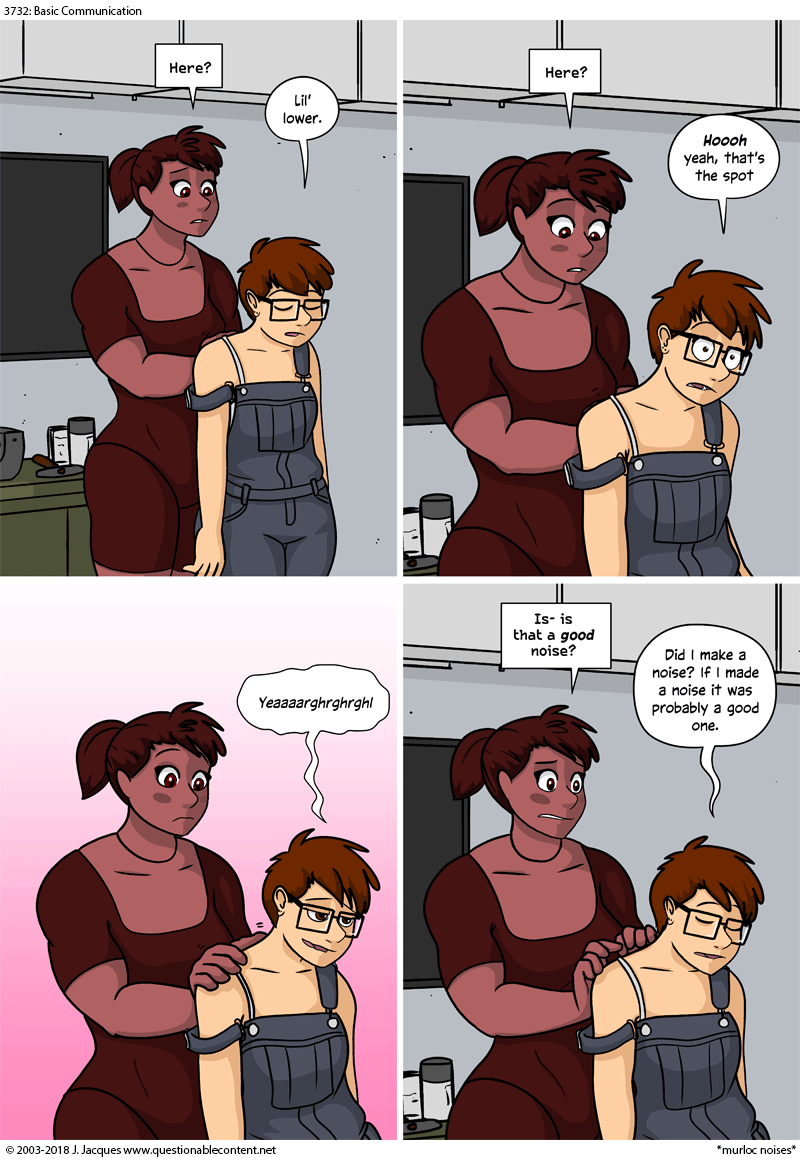 Bubbles an ex-millitary AI, her body is literally a weapon of war. In her earlier roles she was always wearing heavy battle-armour.

I understand why the character of bubbles would be blushing at this point, but I'm puzzled as to why she can blush.

She's human-shaped because this would give the battle robots a distinct advantage over, say, wheeled or flying machines while navigating a human-optimised environment. (Don't believe me? Try flying your toy drone into the kitchen to get you a beer). What possible advantage could it be to this machine to be able to blush?

Extra note: Peripheral information, a recent strip has the footer text "Either they don't have blush panels, or they're very good at controlling it". So that does suggest that (contrary to some answers) the ability for robots to blush is an intentional feature.

It may be the case that Bubbles can't blush. The visual style of Questionable Content is more grounded and naturalistic than some other comics, but it's far from the Watchmen style of eschewing even sound effects and motion lines. In panels leading up to the strip in the question, a sigh is written out in the air, a character "says" a cartoon skull, a small motion is conveyed with the word "TILT" and an arrow, and bubbles float in the air around a tipsy person. These elements convey "real" physical and emotional information, but they don't exist in the world of the comic.

The bubbles around drunken Clinton's head are an especially interesting example. 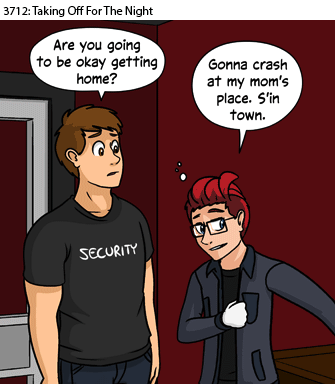 If we witnessed this scene in real life, we wouldn't see any such bubbles, but we'd be able to tell that Clinton has been drinking. He might slur his speech, he might be a bit awkward putting on his jacket, or we might smell booze on him. Aside from stylizing the "S'in town" in his dialogue, Jacques does not depict these phenomena. The ideogram of a few little bubbles does the work of conveying roughly how sloshed Clinton is.

The blush-ovals on Bubbles's face may work the same way: In the reality of the comic, her awkwardness or uncomfortability might be expressed by body language or tone of voice in a way that the comic can't depict, requiring Jacques to use visual shorthand.

It's not unthinkable for Bubbles to be able to really blush; there are stranger things in the world of Questionable Content. I wouldn't completely rule out the possibility that Jacques intended for this detail to be interpreted literally. But to read it as a metaphor, as a comic artist's convenience, is consistent with Questionable Content's style—and raises fewer tricky questions.

Questionable Content 3923 has a caption that reminded me of your question: 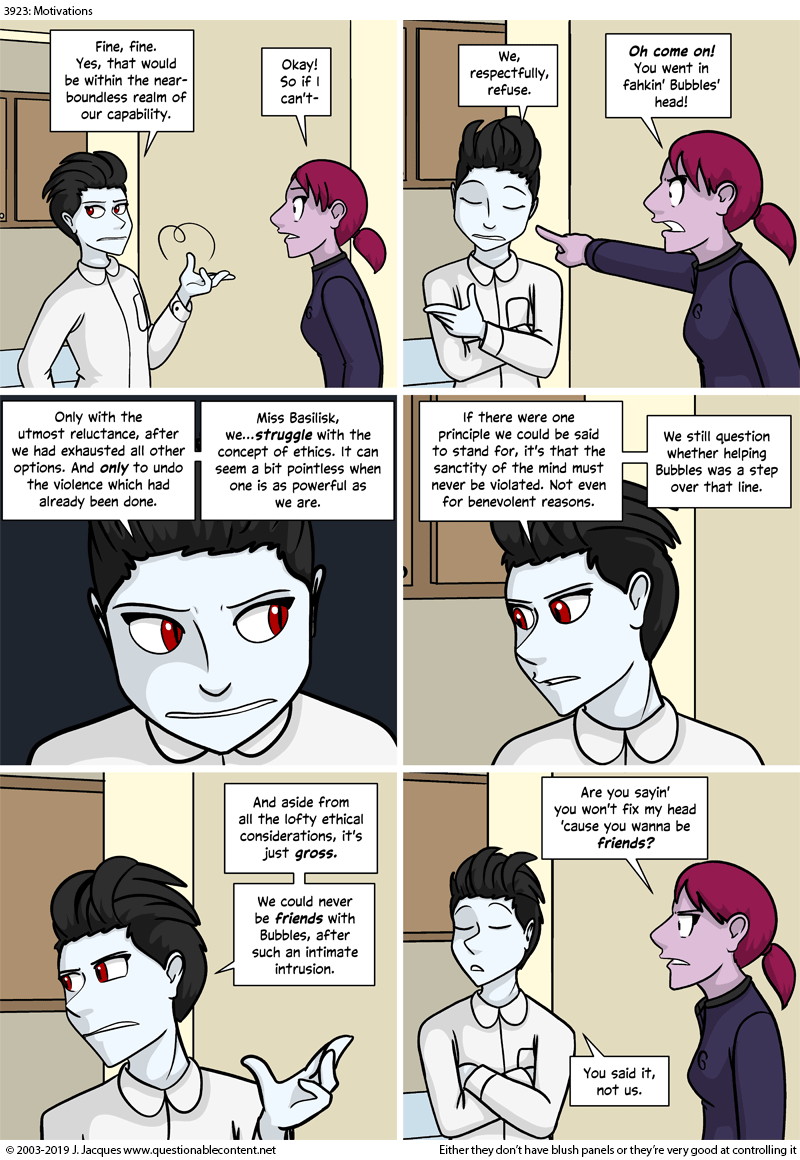 I don't know how canonical these captions are, but it seems to be a word of god implication that some robots and AnthroPCs have specific hardware that allows them to blush.

As for why, I think there's an assumption in the question:

What possible advantage could it be to this machine to be able to blush?

The assumption is that a robot would only have the ability to blush if it gave them some advantage. I don't think that's necessarily the case.

But the short answer is: the ability to blush gives robots the same advantage it gives humans.

Keep in mind that robots in Questionable Content are sentient, and have full lives. They aren't just mindless machines designed for one purpose. They also have some control over their appearance: we've seen several AIs choose bodies and body parts for themselves. So it could be that nobody gave Bubbles the ability to blush. She might have chosen that ability for herself.

You've asked why a military robot would need the ability to blush. I think the answer mostly lies in the first part of this answer (they're sentient and not just mindless killing machines), but from a purely utilitarian perspective, keep in mind that being in the military doesn't just mean you're constantly out killing enemy soldiers. It involves tons of communication: with your squadmates, with your reports, with your commanders, with civilians, and even with enemies.

You might ask similar questions: Why can Bubbles develop romantic feelings? Why can Bubbles feel self-conscious? Why does she have hair? Why can she laugh? The answer is because she's not just a mindless killing machine. She's a full individual.

Edit: reffu pointed out that this is mentioned in Questionable Content 3632: 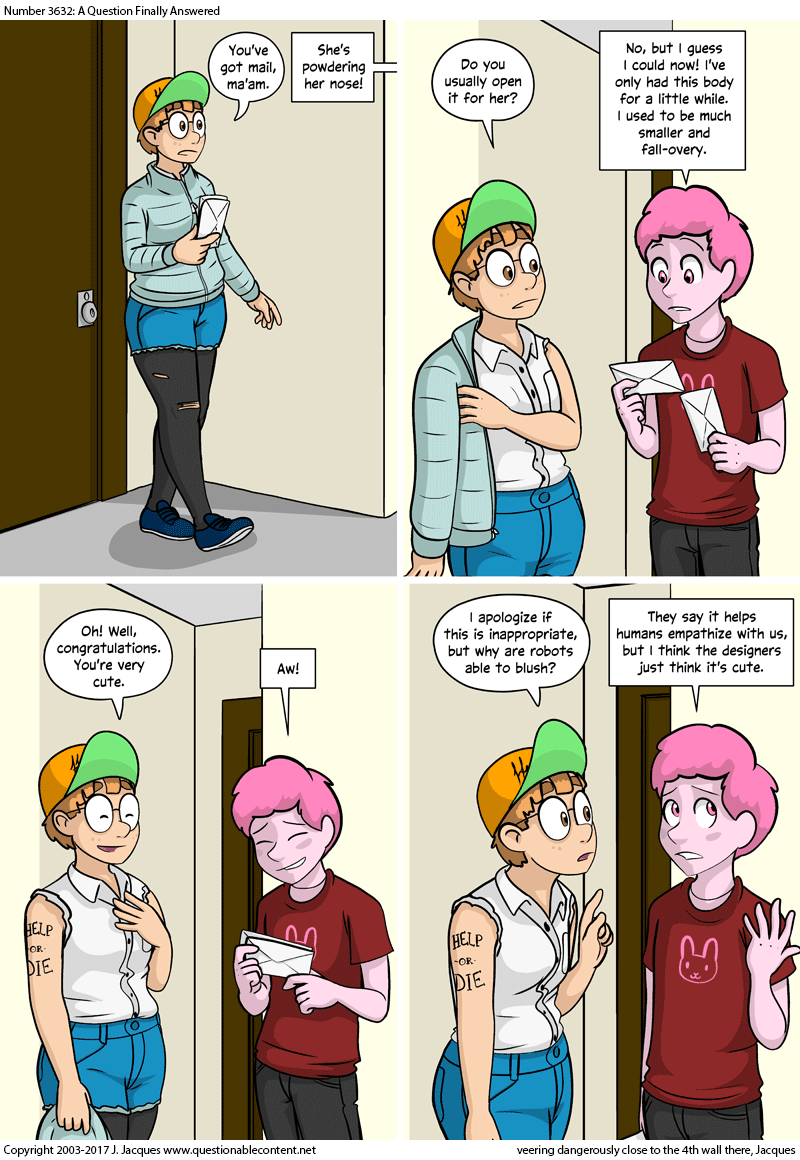 I apologize if this is inappropriate, but why are robots able to blush?

They say it helps humans empathize with us, but I think the designers just think it's cute.

Also note the caption of that comic:

veering dangerously close to the 4th wall there, Jacques

This might provide some insight into the out-of-universe answer: they can blush because Jeph Jacques thinks it's cute.

It's so she can empathize with humans. They explain it in previous pages. Even though she's a combat bot, it's probably considered unethical to not allow her to express a diverse range of emotions, like in Black Mirror: Black Museum

Not the answer you're looking for? Browse other questions tagged questionable-content or ask your own question.

10
Why is Momo using a computer?