Book ending with a space ship flying out of an ice floe in which it was hidden?

I read this in the 80s. There were hangar doors in a (fake?) ice floe underneath which the ship was built. And maybe something about "Miranda" (a star? and the ship's destination?), but I'm not sure. Does anybody remember the book?

I read it in German, but I don't know whether or not it was translated.

If the "ice" could be the icy slopes of remote mountains, then I'm feeling like it could be Orion Shall Rise (1983) by Poul Anderson. 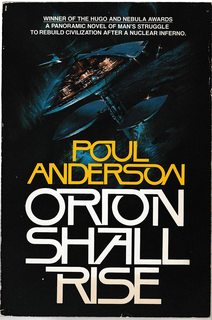 After nuclear weapons ravaged the Earth, only Skyholm, a huge solar-powered station floating above Europe, remains in possession of high technology. But as Skyholm is seized by a religious faction, a young noble escapes to the ground below and joins a group who conspire to use the power of the atom, outlawed for centuries, to regain the lost heritage of space flight.

The world is Earth, but distant enough post-nuclear that the socioeconomic landscape is a strange blend of future technology and feudalism. The planet is also heavily resource starved and unable to support the full restoration of pre-nuclear event technology.

The ship is an old, unused, Space Shuttle that one faction (nation) is trying to revive and launch to reclaim the stars denied by a couple other factions. One of which is able to use a solar-powered aerostat (balloon) to oversee Europe, and other areas at will. The other is Polynesian based and controls the seas while enforcing heavy "ecologically friendly" conditions on the rest of the nations.

The ship is in an ice-covered mountain reachable only in warm months and the cavern is equipped with a bay door for eventual launch.

While it's been a few seasons since I read it, I think Miranda is the either Skyholm-based lady-friend of the rebel, the current "leader" of Skyholm, or possibly just a ranking officer with sympathies for the rebel's cause.

In the book, Skyholm is an aerostat (solar-powered dirigible) residing in the stratosphere where its aristocrats rule over the western area of Europe. It is capable of maneuvering, theoretically over the globe though they only cover their own territory in practice. It has the ability to generate lightning (electrostatic discharge from battery storage), which was designed as part of it's maneuverability but has been turned into a weapon against the people (subjects) living on the ground. The lightning is also used for weather control, sometimes as a means of coercion. The "Captain" of Skyholm is a quasi-hereditary post, descended from the person who was the Captain of the ship at the time of the original nuclear event.

7
Book where all electricity stopped working
14
Book about a boy and girl in proxy magical competition including a field of ice in a magical circus?
17
Name of book with wild, dangerous unicorn
9
Story about space flubber
11
Young adult trilogy about antarctic laboratory and old Gods
10
Non-spooky ghost book where a boy sees ghost children in the garden and is told the stories of them
18
Dystopia where people are regularly forced to move, protagonist must move daily