Alexander the Great vs Aliens

This is a paperback novel I read in a library in the US in the 90s. IIRC, the cover depicted a guy with a sword (presumably Alexander) on a chessboard (possibly fighting/standing over an alien). I vaguely remember something in the background. Maybe a ringworld setting? Certainly some sort of space background.

The plot involves Aliens that abduct historical characters from various planets and have them do battle against each other on a game world (there's something about large walls splitting the world into various sectors -- that's why I'm thinking ringworld-like setting). Gambling is involved.

In this case, the Aliens take Alexander (right before he died), along with a (one-eyed?) henchman who manages to come along. Alexander and henchman are placed in a world/scenario where a race of humanoids (but bigger and stronger than an average human) rule over the humans. Alexander's task is to unite the human tribes and overthrow the aliens.

To make things interesting, the Aliens also place some hero-humanoid historical figure on the world to see if he can stop Alexander. Then they place bets.

Alexander manages to unite the tribes and drills them in phalanx maneuvers. He then takes his army to the field and crushes the initial humanoid (cavalry?) attack against him. This finally convinces the humanoids to trust their hero to train them in a similar manner. They do so, and things become more of a stalemate.

Then, (for some reason) there's a big iron meteor that becomes important (maybe they need the metal for weapons?) and both sides build navies and battle on water.

Then there's some "iron turtles" (essentially armored shells pushed by the humanoids on the inside) that need to be defeated.

The war comes to a climax when Alexander challenges the humanoid hero to one on one combat (which greatly favors the latter because of superior strength/size).
Alexander of course ends up winning, but sparing the other guy.

All along there's a side plot where the abducting Aliens are trying to rig the game (I think the "bad alien" is betting against Alexander) and they rig things to make it look like Alexander kills the other guy. In reality, the ending scene has the two them teaming up and planning to try and liberate the other games on the world (something about going over the barriers).

The Alexandrian Ring by William R. Forstchen. A friend lent me a copy many years ago. It was the first of a trilogy called "The Gamester Wars," but I have not read the sequels. Here's the original cover art, much as you remembered it: 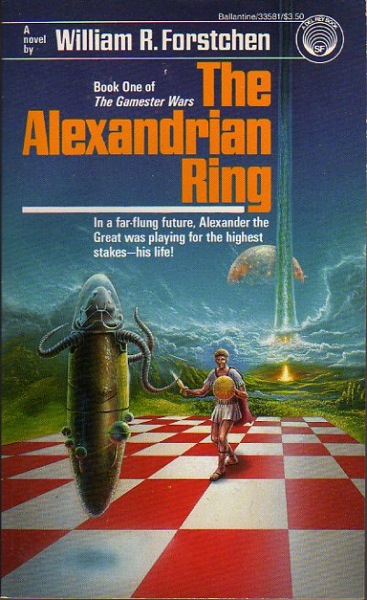 I don't have a copy handy, and it looks like Amazon doesn't have an e-book version available for Kindle, but what I remember is a close match for what you describe. Including the fact that, just as you thought, most of the action takes place in one relatively small portion of a huge ringworld which is obviously based upon Larry Niven's concept.

And yes, the humongous meteor is important. As you suggested, it's the primary source of iron in that part of the ringworld, and thus the alien race (which has controlled it for many centuries) has long had an advantage in better weapons and armor and so forth whenever they clash with the human tribes. Alexander is certainly smart enough to see that it is the main strategic resource in that region, and so he is bound and determined to take it away from the aliens so that the local humans can control it for a long time and, at the very least, "level the playing field" where iron-based technology is concerned.

To confirm that this is, in fact, the same book you remembered, I'm going to offer one paragraph from a review written soon after the book first came out, and now reproduced in the Google Books version of a volume called Science Fiction & Fantasy Book Review Annual 1988.

We are in a far future in which interspecies galactic war has been interdicted by a super-race of Overseers. The formerly belligerent species, including humans, seem to have fallen under the grip of a few supercapitalist types, who conduct vast wargames, using colonized planets. Bettors wage planets, even whole solar systems, on the results of primitive battles, refereed by a neutral species and set up by gamemasters. The discovery of certain time matrices in the universe has allowed the introduction of historical figures into the contests. A human gamester, Corbin Gablona, has kidnapped Alexander the Great from his deathbed, to oppose a legendary alien military genius, Kubar Taug, on a huge artificial ringworld. But Corbin is bent on a colossal scam: he will switch bets on the eve of Alexander's final victory, kill the Greek emperor, and win much of the civilized universe.

19
60s-70s science-fiction novel about interstellar agent with artificial hand
10
Identifying a fantasy/scifi series/book about abandoned colony/world
1
3D animated film with flying motorbike racer and aliens in mech-suits
7
Detective Story on the moon with a space yacht and an escaped prisoner
11
French movie: a few people gather in a cold/frozen place; guy hides in locomotive and gets shot