Does Squirrel Girl have maxed power stats on the Marvel Wiki?

According to this answer on the question: "How did Squirrel Girl defeat Dr Doom?", all of Squirrel Girls power stats are "maxed" out.

According to the answer, I am supposed to be able to check Squirrel Girl's entry on the official Marvel wiki and be able to see her power stats there.

However I'm unable to see any maxed stats in her entry on the page.

marvel squirrel-girl
Share
Improve this question
edited May 3 '18 at 14:11

At the bottom of her page named "in comics full report" you can see her power stats showing a full set of stats.

Comparing this with Thanos' stats shows that she's even got higher average stats than he does!

Another example of someone with full stats is Eternity:

As mentioned by Valorum in the comments, it is possible this is a joke in part from marvel about a superhero with Squirrel powers being one of the most powerful beings in the galaxy. While this isn't necessarily clear from the entry, it is a possibility given the Official Handbook on the Marvel Universe has differing power levels for the character.

Per the Official Marvel Handbook (2005 - Avengers edition), her real stats are as follows. All are well within the "normal" range for an enhanced human, (which incidentally fits in with what we see her doing in her comics). 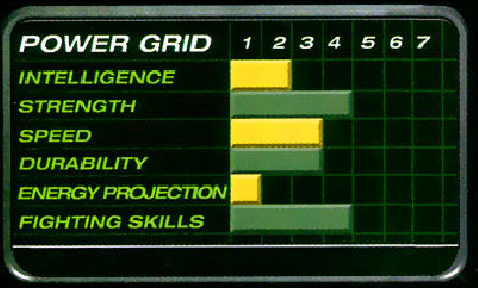 Her stats in the more recent Official Marvel Handbook A-Z (2008) have identical stats for her as well as a blurb that describes her as a 'surprisingly fierce and formidable unarmed opponent' but by no means possessed of god-like abilities. 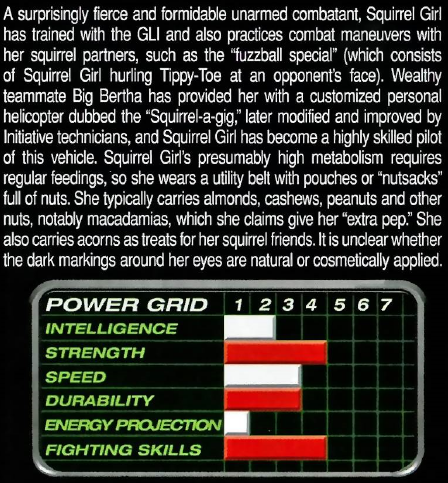 As an example, if her stats were actually "maxed out" this fight would have ended within nano-seconds, assuming he could even perceive her within his limited plane of existence.

Look at the Power Grid at the top right of the page. All stats are at 7 out of 7. 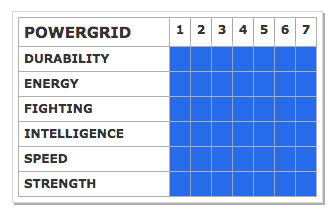 The layout has changed so I thought I would reply with a modern answer.

You just have to go to her "in comics full report" and scroll all the way to the very bottom. She scores a near-unbelievable all 7's!

33
Should the Adamantium bullets have worked on Wolverine?
7
How does Cyclops see?
18
Why could Squirrel Girl access the Iron Man suit?
24
Has Cyclops of the X-Men ever developed the power to control his eyes?
7
What happens if you manage to steal the Silver Surfer's board?
27
Why did Otto Octavius use tentacles mounted on himself instead of remote controlled robots?
10
What are Squirrel Girl's 'actual' stats? Is she truly the most powerful being in the Marvel universe?
8
What became of the "become a marvel superhero" contest ads in the '90s?
13
Did Thanos use the full power of the Power Stone to punch Captain Marvel in "Avengers: Endgame"?